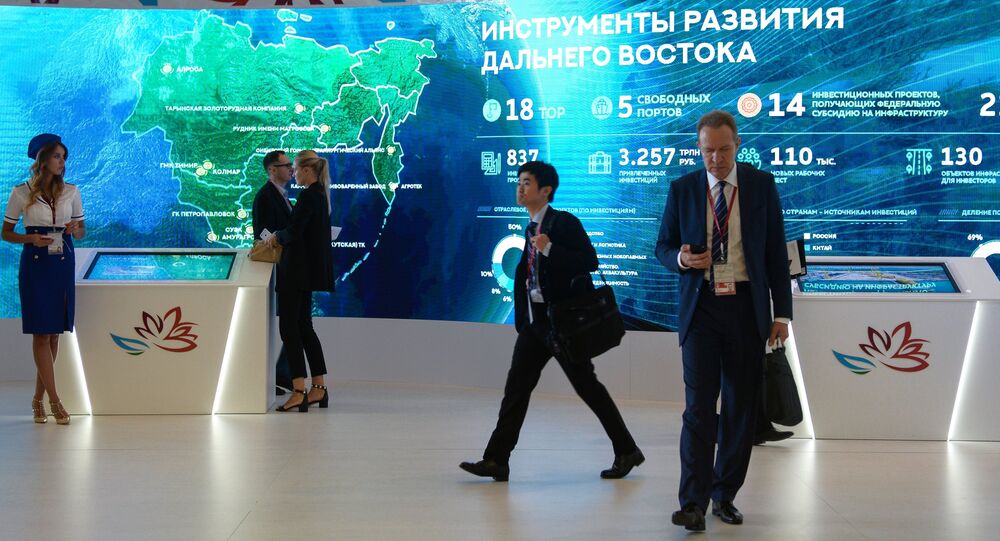 According to the vice president of American Chamber of Commerce, the US businesses continue to work in Russia despite difficulties caused by the restrictions imposed on Moscow by the US.

VLADIVOSTOK (Sputnik) — Companies from the United States continue operating their businesses in Russia, for example in the country's Far Eastern regions, in the usual mode, despite the deterioration of relations between the two countries and Washington's anti-Moscow sanctions, American Chamber of Commerce (AmCham) Vice President Natalia Schneider told Sputnik.

No plans to leave Russia

Despite certain difficulties caused by the restrictions imposed on Moscow, the US companies continue their business activities in Russia, according to the AmCham official.

"Business does not like sanctions, but nevertheless, being the American Chamber of Commerce, we work for our members and we try to improve the investment situation in the country. Therefore, our member companies continue their business here. I would not say that some companies are forced to close their business and leave Russia. At least for now," Schneider said.

The representative of the chamber of commerce added that there were not many new companies that came and invested in Russia, but the companies that had been already presented did not withdraw from the country.

© Sputnik / Pavel Lisitsyn
Sanctions Had Little Negative Effect on Russia's Industrial Sector
Speaking about the activities of the US companies, Schneider said that US industrial paints producer PPG had recently opened a new plant in Russia's Lipetsk special economic zone, and industrial conglomerate Honeywell would also open a plant in the same location. Machinery producers Caterpillar and John Deere continue their business as well.

The digital economy and infrastructure, including in the Russia's Far East, will become the basis for the future development of relations between US and Russian business, the AmCham vice president said, adding that there were a lot of statements about the need to develop infrastructure in Russia’s Far East during the Eastern Economic Forum (EEF) in Vladivostok.

"I think [tourism] is an area where American companies will be interested, especially if we take the West Coast, for example, California. Because they are closer to this region [the Far East] than to the European part [of Russia]. I think it will be interesting," Schneider added.

According to the Russian Union of Travel Industry, in 2015 US tourists visited Russia 233,000 times, which is the seventh highest figure from the non-CIS countries after Poland, Finland, China, Germany, Mongolia and Turkey.

The fact that Russia's Far Eastern regions have prospects for cooperation with the US regions was proved by the visit of Jerry Brown, the incumbent governor of the US state of California, to the EEF, according to the AmCham vice president.

© AP Photo / Mary Altaffer
US Comes to Russia With 'Absurd' Request for More Sanctions Against North Korea
During the visit, Brown participated in the session dubbed "The Russia–China–Japan–US Quadrangle: Are There Opportunities for Cooperation?" and delivered a speech in Russia's Far Eastern Federal University. In his statements voiced during the forum, the governor said that he would like to extend the opportunities for cooperation between Russia, the United States and other Pacific nations, as well as that Moscow and Washington have good prospects for cooperation in case of a good will.

"I think that his visit caused interest. I consider that it was a positive visit … The cooperation between the state of California and the Far East could definitely take place. The governor said that he was ready to it," Schneider said commenting Brown's visit.

Legal climate, conditions for investors in the Far East

The official added that in order to develop cooperation between the Russian and the US entities in the Far East the investment climate and the laws must be more predictable.

"That is, if the investor came, he should have conditions for investment. Then they can not change a year later unexpectedly and this predictability should be in place. Sometimes it worries foreign investors," Schneider said.

The relations between the two countries should also improve, otherwise it will be difficult to explain to companies that have never been here that they should invest in Russia, and the most interesting projects that will contribute to the development of both countries should be prioritized, the AmCham official added.

According to Schneider, these changes would require time, but both the Russian government and foreign companies have the will to implement them and to develop the region.