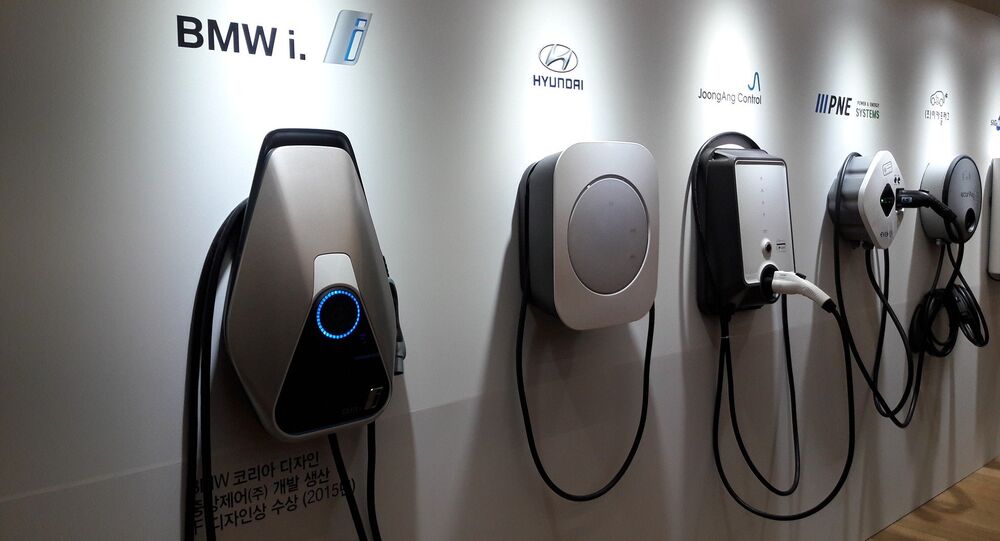 BMW and Jaguar Land Rover have followed Volvo in announcing plans to switch over to producing exclusively electric and hybrid cars. A car industry expert told Sputnik why more and more manufacturers are ditching petrol and diesel engines.

BMW and Jaguar Land Rover announced on Thursday, September 7, they were both planning to phase out the production of petrol and diesel engine cars.

It follows Volvo's decision earlier this year to switch over to entirely producing electric or hybrid cars by 2020.

Other European car manufacturers are now set to follow suit and David Bailey, a professor of industry at Aston University in Birmingham, said one of the factors driving the change was that the European Union was bringing in much tougher standards on carbon dioxide emissions in 2021.

"Companies will face fines if they don't hit the targets and this will especially hit the German manufacturers, who produce bigger cars with bigger engines," Professor Bailey told Sputnik.

Professor Bailey said the technology had also improved massively in recent years and the cost of electric cars was also falling as cheaper batteries became available.

"There will be a tipping point in the early 2020s when electric cars will outperform the combustion engine, in terms of value for money and performance, and then you will see a big switch over," Professor Bailey predicted.

"The other big factor is the dieselgate scandal, which hit Volkswagen, and there are big restrictions planned on diesel and petrol cars," said Professor Bailey, who pointed out that the British government planned to ban the sale of traditional cars in 2040 and the Scottish government had set an even earlier deadline of 2032.

"The [British] government has a manifesto commitment for almost all cars and vans on our roads to be zero emission by 2050. We believe this would necessitate all new cars and van being zero emission vehicles by 2040," said Jesse Norman, the parliamentary under-secretary at the Department for Transport, in a recent written answer to a question in the House of Commons.

£60m to accelerate innovation in new technologies, including low carbon and digital projects by 2020 #scotpfg pic.twitter.com/512StySAV3

Lack of Infrastructure for e-Cars

Professor Bailey said the problem was that the infrastructure for electric cars was not keeping up with the increase in sales.

"I have been driving one for four years and now I'm struggling to find charging points because I'm competing with so many other people who have bought electric cars recently," he told Sputnik.

What is the future of diesel? Today we tackle the subject of air quality in global cities and the future of the diesel engine. #JLRTechFest pic.twitter.com/eU8mQuA62q

He said Britain needed to invest heavily in electric charging points and cited Norway as a role model.

"There [Norway], one in five cars are electric, there is much better infrastructure, and they are allowed to drive in bus lanes and the whole approach is more holistic," Professor Bailey said.

He said that over the next decade the landscape will change enormously in Europe and petrol stations will start closing down, or being converted to electric charging stations.

BMW said that by 2025 it planned to be producing 12 electric models — including an electric Mini, which will be available in 2019 — and 13 hybrid versions.

"The trend towards electric mobility is irreversible. But it will happen in different ways and at various speeds in different parts of the world. The change in China is just one example," said BMW director Klaus Frohlich.

We are committed to electrification, so from 2019 all new Volvo car models will include an electric motor. #VolvoCarsEVs pic.twitter.com/FWGVKyAdgo

Jaguar Land Rover, which is owned by India's Tata company, said by 2020 all its cars would have an electric or hybrid version, the first of which would be the Jaguar I-Pace, which will go on sale next year. It said it had also engineered an electric version of the classic Jaguar E-type.

But it is not just Europe where things are changing.

"In the US Tesla are shaking things up. Their shares are now more highly valued on the stock exchange than General Motors or Ford, even though they sell a fraction of the number of cars. General Motors has produced the Chevrolet Bolt, to compete with Tesla, but Ford is a long way behind," Professor Bailey told Sputnik.

He said Nissan was investing heavily in new technology while Toyota was looking more towards hydrogen vehicles.

"But the Chinese are going for it in a big way. Half a million electric cars were sold in China last year and the government there are investing very heavily in it, partly because of the improvements it could make to air quality," he concluded.