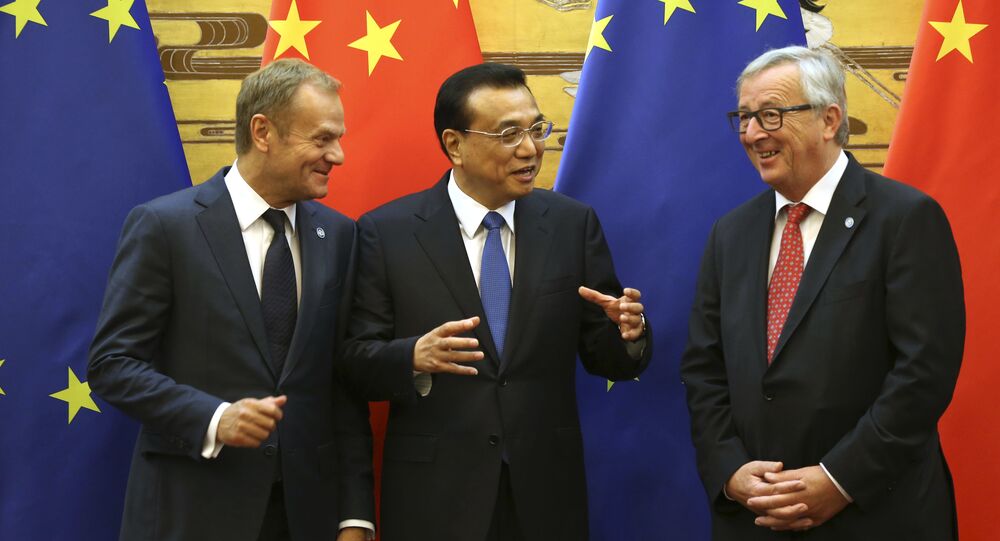 In response to the White House’s rising economic nationalism, the European Union brings forward a summit with China to promote free trade and international cooperation.

© AFP 2020 / Paulo Nunes Dos Santos
Ireland's PM Kenny Rejects 'Any Suggestion' of Exiting EU
According to EU officials, the annual summit, usually held in mid-summer, may take place as soon as April or May in Brussels at the request of Beijing amid escalating economic conflicts with the US.

The EU believes China intends to use the summit as a demonstration of Xi Jinping's rousing endorsement of globalization and multilateralism in the wake of the new US President Donald Trump's insistence on ‘America first' policies.

"With an early summit, China wants to send a message to the United States that it has friends in Europe," one official, who helps formulate EU policy, was cited as saying by Reuters.

© AP Photo / Andy Wong
China Warns India Over Taiwanese Delegation Visit
Europe itself is preparing for countermeasures if Trump follows through on his ideas including a plan to overhaul the US corporate tax system by taxing US companies' domestic sales and imports, while exempting their exports.

Jyrki Katainen, the European Commission vice-president who oversees EU trade policy, said in a recent interview that the EU would have no other option but to act against the US if it decided to take steps against the union's interests or "against international rules in trade".

The EU may still be concerned about the direction of its second-largest trading partner, yet China's vocal support for a strong, stable Europe and international institutions such as the United Nations becomes more important for the union at the time of Trump's inward-looking stance.

"With this drive by some countries to undermine or weaken international institutions, we would want to see China supporting and believing in the United Nations, the World Trade Organization," a second EU official said.

"If China wants to help uphold the rules-based global order, then we welcome that," said a third EU official. "But we also say: let's see some concrete steps."

On Wednesday, President Trump  met with a group of executives from big-name retailers such as Target and Best Buy, as the industry leaders made the case that they believe a tax reform would inflict damage on their businesses.