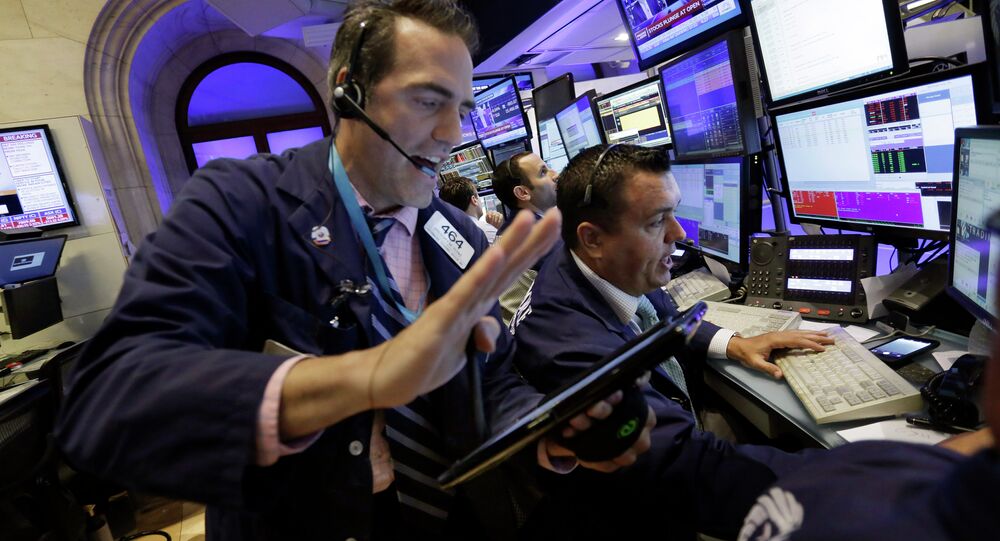 After taking a dive on Monday morning, the US markets have ended the day with only slight improvements.

The Dow Jones plummeted by as much as 1,098 points, averaging out to over 600 points after only a few hours. This was the largest intraday swing in history, and by the end of the day, the Dow settled roughly down at 585.

S&P finished down by 77 points, and the Nasdaq closed down 179 points.

US tech giant Apple managed to gain a significant turnaround, ending the day down 1.48% after a dramatic drop of 13% Monday morning. That improvement helped stabilize both the Nasdaq and S&P indexes.

US oil fell 5%, with major companies Exxon and Chevron each dropping by more than 4%. US light crude ended the day at $38.24 a barrel, the lowest it’s been since February of 2009.

Other global markets also tumbled. STOXX Europe was 600 down, more than 5%, and the Shanghai Composite dropped 8.5%, it’s most dramatic one-day decline since 2007.

Chinese tech giant Alibaba opened at an all-time low. Setting records with its initial public offering last September, shares of Alibaba fell below its $68 IPO for the first time on Monday, ending the day down by more than 3% at $65.86.

The global drop was attributed largely to uncertainty among investor in relation to slowing growth of the Chinese economy. Panic over a potential slowdown in the Chinese economy contributed to falling market shares last week, and also played a role in Monday’s events.

This stemmed from a preliminary report which showed a six-year low in Chinese manufacturing, potentially affecting demand for American goods. The panic also follows Beijing’s devaluation of its currency last week in an attempt to make imports more expensive.

"Obviously what we have is a structural problem over China," market analyst Patrick L. Young told Sputnik. "The Chinese markets have been deteriorating for some weeks now. So what we are seeing is a global market scenario, but the whole story is very much overblown."

But there are also other circumstances which led to investor panic. Many in the financial industry have expressed skepticism of the US Federal Reserve, and the possibility that the organization could create a sudden spike in interest and mortgage rates.

Others have also pointed to the Greek financial crisis, and Prime Minister Alexis Tspiras’ decision to resign last week.

"New elections might solidify this support, but in the near term will increase uncertainty about whether the Greek crisis re-emerges this fall," Boston College economics professor Bob Murphy told ABC News.

Financial experts have stressed that there’s no cause to panic, and that investors should focus on the long-term, rather than short-term market fluctuations.