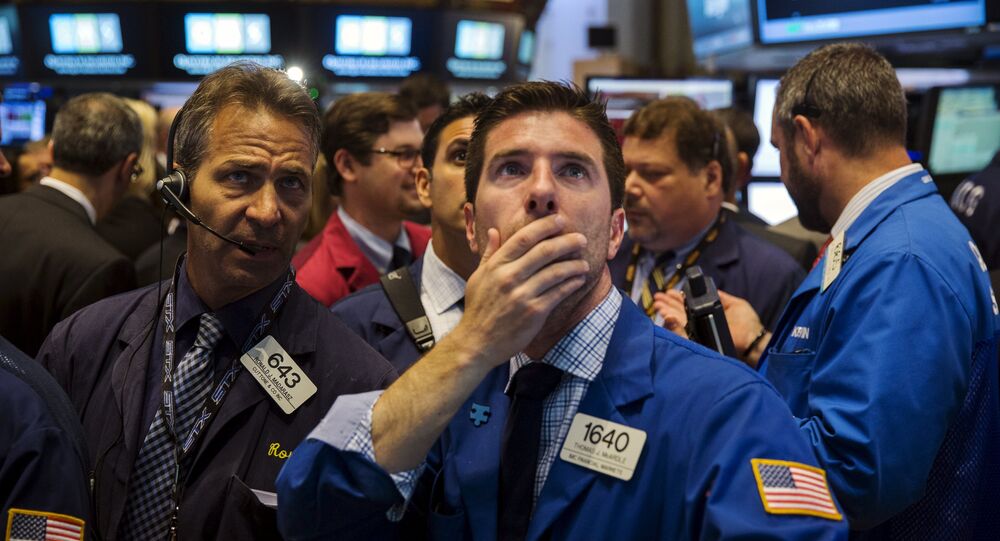 After three days of losses, Wall Street is likely to open in the red on Tuesday, as Greek worries, weaker data and the opening Fed policy meeting are all weighing on stocks in the US and overseas.

Kristian Rouz — Monday's trading on Wall Street and the following day's sessions in Asia-Pacific and Europe were all marred with negative sentiment, stemming from Greece's financial impasse. Most stocks retreated amidst increased volatility, currencies markets saw significant sell-offs as well. Investors are also jumpy ahead of the US Fed's policy meeting starting Tuesday.

Global stocks dropped, even though Tsipras claimed on Tuesday that his cabinet is ready to compromise, blaming differences between Greece's creditors in Europe and the IMF for the prolonged stalemate. The MSCI All-Country World Index was down 0.3% in London, while insurance costs of the European bank debt rose for the third straight day — with market participants pricing in Greece's default.

"The big contradiction is the IMF's presence, which wants measures and a restructuring, (whereas) the others want measures but no restructuring. They want an a-la-carte IMF," Tsipras said.

© AFP 2020 / JEWEL SAMAD
After Sticky Week, Wall Street All Ears to Fed Rhetoric, Overseas Risks
Adding to the turmoil, Greece's finance minister Yanis Varoufakis said the nation will not prepare any new suggestions on how to overcome the deadlock for the 18 June meeting of European finance ministers. Varoufakis' commentary sent the German investor confidence down immediately, according to estimates by ZEW Research.

In Europe, the Stoxx Europe 600 Index dropped 0.6%, hitting its five-month lowest. Across the Atlantic, the S&P 500 stock futures retreated 0.5% overnight, meaning Wall Street is likely to mark its third consecutive day of losses on Tuesday. Adding to bearish sentiment, US manufacturing in May declined against positive expectations, suggesting the Fed's policy remarks might be more dovish essentially.

In Frankfurt, the DAX Index slid 1% weighed on by the retreat in automotive stocks. Car sales in Europe marked their six-month lowest in May. Greek stocks also shed 2.3%.

In Japan, the yen retreated to 123.54 against the US dollar amidst allegations of FX rate manipulations by the nation's regulators. The MSCI's Emerging markets Index declined 0.8%, Hong Kong's Hang Seng lost 2.7%, now 10% below its highest posted on 26 May.

In China, stock market suffered this month's greatest two-day losses amidst the unsuccessful IPOs undertaken by the nation's 25 companies. Industrial, telecom and tech enterprises led losses during Tuesday's trading. The Shanghai Composite lost 3.5%, extending the two-day losses to 5.4%. However, the index is just below its five-year highest, at 19-fold projected earnings, compared to 36-fold earnings at the top of 2007 bubble. That said, there is still room for aggressive expansion in mainland China's shares before the next meltdown.

"If you look at some of the stocks now in the Shanghai market, I think they are heading toward the bubble territory," Sam Le Cornu of the Hong Kong-based Macquarie said.

The CSI 300 Index dropped 3%. This week, margin trading increased in the mainland's markets, with margin debt rising to a record 1.46 trln renminbi in Shanghai and Shenzhen. What it means is that mainland's financial sector is a lot more fragile and risk-vulnerable than it was in 2007, mainly because they are lacking substantial support from the real economy. China's ratings are bound to go down as shadow banking expands, and riskier assets gain more ground.

In commodities, oil gained, adding 0.3% to $59.72/bbl in the US amidst signs that crude inventories are shrinking for the seventh week straight. Higher fuel consumption in summer is also pushing petrol prices up. Brent crude rose 0.5% to $65.25/bbl in London.