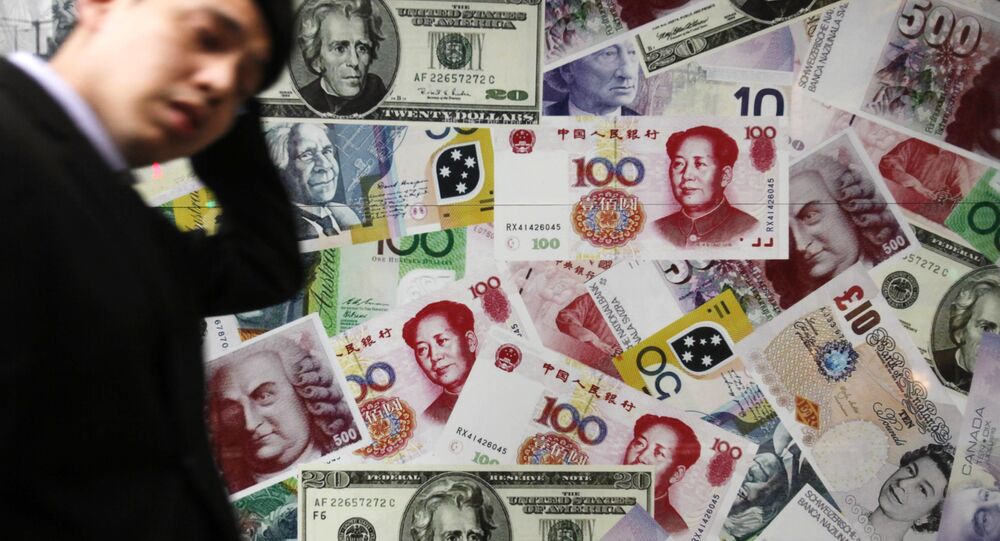 Europe Not Afraid to Defy US in Asian Adventure

As a trio of European countries have followed the UK's lead and decided to join the Asian Infrastructure Investment Bank (AIIB), a move seen as defiant by the US, former Italian MEP explained that the countries don’t want to miss the opportunity to pursue profitable and secured investments in the most dynamically developing region in the world.

© Flickr / Holly Golabek
Europe Gets ‘Foot in The Door’ in Asia by Joining AIIB
“The US government has involved so much effort and means not to let Europe participate in what Washington presents as a 'trap'”, the Italian journalist, politician and former MEP Giulietto Chiesa told Sputnik.

But, as they say in London, “business is business,' and the European countries don’t want to miss the opportunity, he added. China already dominates in the development of Asian infrastructure, transport, and energy. Investments in the area alongside such a partner will most likely be very profitable and well-secured. Therefore, Britain chose to enter the game. Germany, France and Italy are watching intently.

“Russia does not make its deep interest in the joint financial enterprise a secret,” he said. “If you just look at Siberia and especially Russia’s Far East, you’ll see that AIIB will most likely become the key tool in facilitating and attracting foreign investment from all over the world which could be 'secured' by China.

© Sputnik / Alexei Babushkin
Soft Power: Beijing Offers Seoul to Join AIIB, Reject THAAD Deployment
Besides, it is also apparent that all the BRICS countries (Brazil, Russia, India, China and South Africa) will join in, with Iran also considering stepping in.”

It won’t be easy for the US to deal with a competitor of such a caliber, Giulietto Chiesa added.

It's a sober fact that the last episode only proves the obvious – China is a new point of attraction for world finance, a center of gravity that is constantly changing Asia. And it is impossible to stop this ‘shift of power’, the politician stated.

The former MEP explained that the crisis of the Western economy, including that of the US, regardless of its growth, is artificial in nature; more often the finances are cut off from the production of commodities and services. Asia has taken the place of developed nations in the “material production” of amenities, at least from a mid-term prospective.

Therefore China has also stepped in, and the US plans to revise the rules of international trade, as is now being discussed at the TTIP (Transatlantic Trade and Investment Partnership) negotiations, which he claims are forced. These, he says, are aimed at forcing Europe to follow a path which is in America's interests and controlled by the US.

© AFP 2021 / WANG ZHAO
US Uses Current Credit Rating System to Spread Its Hegemony – Dagong CEO
In the US, the Asian Infrastructure Investment Bank (AIIB) was instantly positioned as a competitor to the Asian Development Bank, an English-American financial agent, which in tandem with the World Bank set the tone in Asia for decades, he said.

The Chinese government, standing its ground, has undertaken one strategic initiative after another.

Just as a quick reminder: in December 2013 Beijing created its own credit rating agency. Standard&Poors, Moody's and Fitch found themselves face to face with a new competitor, Dagong, the purpose of which is to deprive the “big troika” of its role as the final authority in defining the financial “health” of different states and transnational corporations. The emergence of the AIIB has the similar intentions

On Tuesday, France, Germany and Italy all agreed to follow Britain’s lead and join a China-led international development bank, according to European officials, delivering a blow to US efforts to keep leading Western countries out of the new institution.

The decision by the three European governments came after Britain announced last week that it would join the $50bn Asian Infrastructure Investment Bank, a potential rival to the Washington-based World Bank.

Australia, a key US ally in the Asia-Pacific region which had come under pressure from Washington to stay out of the new bank, has also said that it will now rethink that position.

US Assistant Secretary to Visit Asia for Dialogue - State Dep't

Russia, China Concerned by US Attempt to Increase Influence in Asia-Pacific