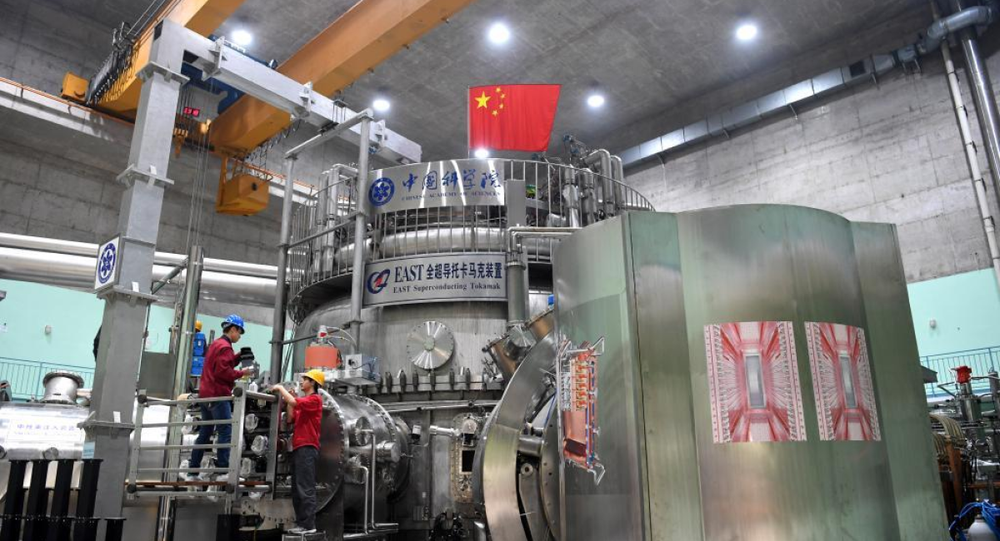 The Belt and Road infrastructure megaproject doesn’t just include rails and highways, it’s aimed at helping nations achieve energy independence, too. China is exporting nuclear power plants of a newer, safer design to partner nations like Pakistan, as well as building them at home to help transition away from fossil fuel use.

China’s futuristic nuclear fusion reactor just set a new world record for the longest duration of time in sustaining the sun-like temperature needed for fusion to occur. While China is still a long way from a fusion power plant, the achievement is an important step towards clean, sustainable electricity generation.

The achievement was announced on Friday by Gong Xianzu, a researcher at the Experimental Advanced Superconducting Tokamak (EAST) at the Hefei Institutes of Physical Science of the Chinese Academy of Sciences in China’s Anhui Province.

Li Miao, director of the physics department of the Southern University of Science and Technology in Shenzhen, told the Global Times that “the breakthrough is significant progress, and the ultimate goal should be keeping the temperature at a stable level for a long time.”

However, he cautioned that the technology is still decades away from actually being used outside of a lab. "It's more like a future technology that's critical for China's green development push,” he said.

Xinhua/Liu Junxi
The Experimental Advanced Superconducting Tokamak (EAST) at the Hefei Institutes of Physical Science of the Chinese Academy of Sciences in China’s Anhui Province, seen on May 28, 2021.

"In the shorter term, China is building a new generation of nuclear power plants they claim to be the world's safest. The Hualong One design, China's first domestic nuclear reactor, will also play a role in China's Belt and Road Initiative infrastructure megaproject, helping both China and partner nations to achieve energy independence. The effort also includes other forms of clean energy, such as renewables."

China has built at least six fusion reactors of the Tokamak design, a torus-shaped chamber devised by Soviet physicists in the 1950s that uses magnets to create a stable plasma equilibrium; EAST is China’s fifth. A new reactor in Chengdu, Sichuan Province was turned on for the first time in December.

The reactor has been nicknamed an “artificial sun,” but according to NASA’s Jet Propulsion Laboratory, the center of the sun is just 15 million degrees Celsius, meaning the device is several times hotter than the sun.

Fusion power has long been sought after for its enormous energy output and clean production. While nuclear fission plants that split uranium or plutonium fuel to release energy produce large amounts of radioactive material that must be properly stored and disposed of, fusion reactions combine hydrogen atoms to create helium, which is harmless and actually highly sought after as a coolant for producing magnets and semiconductor chips. A shortage of helium in recent years has sent helium prices soaring as old sources have begun to dwindle.