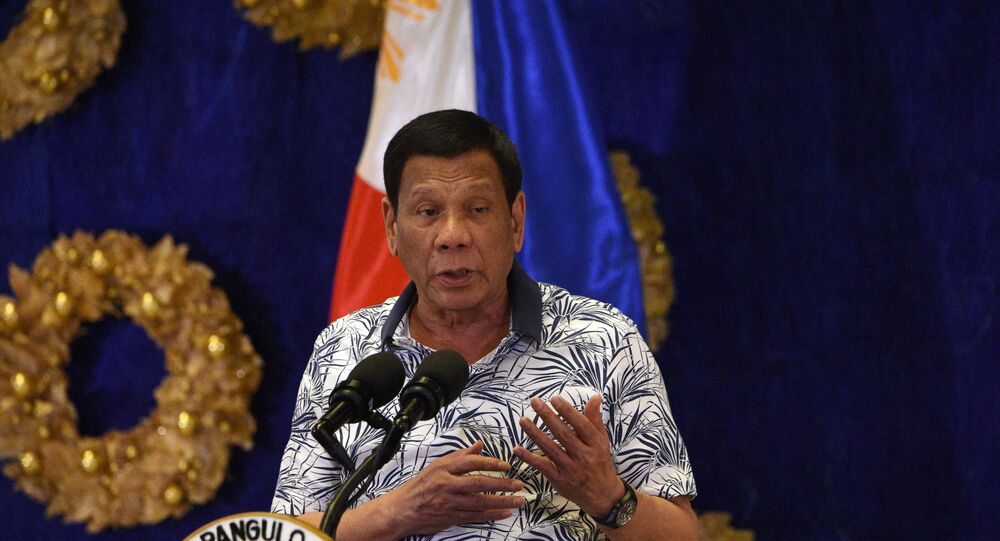 Don't Be Rude, Duterte Warns After Philippine FM Tells China to 'Get the F**k Out' Over Sea Row

The Philippine Department of Foreign Affairs (DFA) has issued numerous diplomatic protests over what they claim to be the illegal presence of Beijing's maritime militia in the Southeast Asian nation's exclusive economic zone in the South China Sea.

Philippine President Rodrigo Duterte has underscored that China "remains our benefactor" amid Manila's efforts to increase COVID-19 vaccine delivery as tensions between the two sides over disputed waters persist.

The Philippines has already received at least 4 million doses of the vaccine developed by the Chinese firm Sinovac, including 1 million doses donated by the country's government.

"Just because we have a conflict with China doesn't mean to say that we have to be rude and disrespectful", Duterte added during a news briefing on Monday.

He also urged Beijing to allow Filipinos to "fish in peace" in the South China Sea, arguing that he had never pledged to retake disputed waters when campaigning for the presidency. During a 2016 election debate, however, he vowed to ride a jet ski to the South China Sea so as to personally make claims if he assumes office.

Monday's remarks came after Philippine Foreign Affairs Secretary Teodoro Locsin Jr. did not think twice before using obscene language to scold Beijing for refusing to withdraw its ships from the Scarborough Shoal, also known as Bajo de Masinloc, a ring-shaped coral reef located in what Manila sees as its exclusive economic zone in the South China Sea.

mentored me in my Myanmar understanding and response. I went to China to get his advice before the ASEAN leaders summit and followed it to the letter.

"China, my friend, how politely can I put it? Let me see… O…GET THE F**K OUT. What are you doing to our friendship? You. Not us. We're trying. You. You're like an ugly oaf forcing your attentions on a handsome guy who wants to be a friend; not to father a Chinese province […]", Locsin Jr. tweeted before extending apologies to China's Foreign Minister Wang Yi "for hurting his feelings".

The past few months have seen an escalation of tensions between the two sides, with the Philippines protesting the presence of Chinese ships in the South China Sea and Beijing insisting that all its actions are in accordance with international law.

© REUTERS / Erik De Castro
A fisherman repairs his boat overlooking fishing boats that fish in the disputed Scarborough Shoal in the South China Sea, at Masinloc, Zambales, the Philippines (File)

In late March, the Philippine Coast Guard said that about 200 vessels believed to be part of the Chinese "maritime militia" were seen attached in a line formation in the Whitsun Reef in the South China Sea. Manila lodged a diplomatic protest over the issue and demanded these vessels leave the area.

© AFP 2021 / STR
Philippines Strongly Supports US Position on South China Sea, Defence Ministry Says
The US moved to take the Philippines' side, asserting that China's "maritime militia" poses a threat to regional nations. Beijing rejected the allegations, claiming that China has no such vessels in the area.

Despite having no claims to the areas, the US frequently sends its warships to the South China Sea to implement "freedom of navigation" missions, sparking harsh criticism from Beijing.