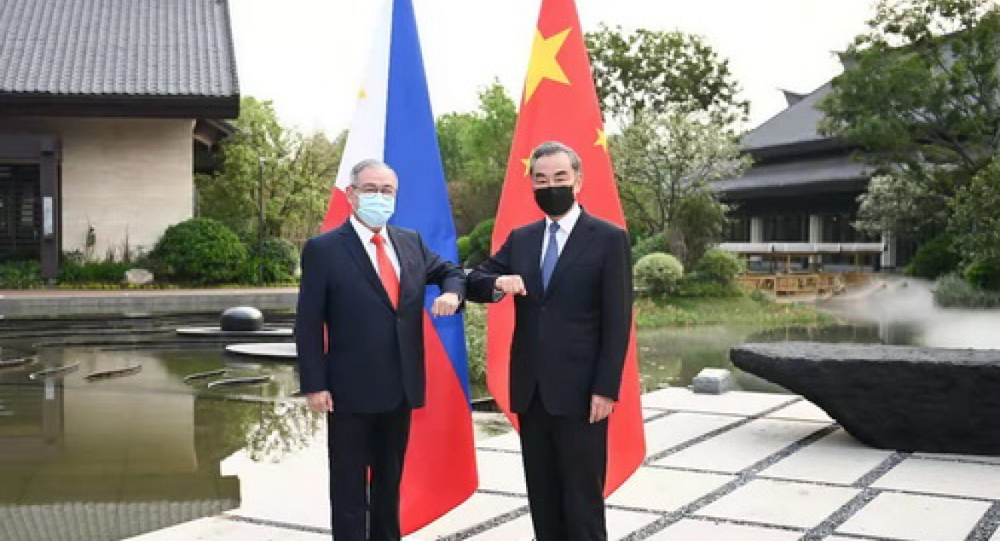 As a dispute over Chinese fishing boats in waters claimed by the Philippines heats up, the US is rushing to capitalize on the situation, painting China as a threat and sending naval forces to the region. Amid the rancor, Manila and Beijing are attempting to springboard finalization of the long-discussed code of conduct for the South China Sea.

Since early March, some 220 Chinese fishing boats have been tied together in a formation off the coast of Whitsun Reef, a V-shaped island in the Spratly Islands that is claimed by the Philippines as well as China and Vietnam. China has claimed the boats are sheltering from bad weather. Manila has asked them to leave, and begun lodging daily protests with Beijing over their continued presence.

Washington has long postured as the global policeman and enforcer of international law, including challenging China’s claims over islands in the South China Sea. Amid this dispute, the United States has shifted a carrier strike group and amphibious ready group, each headed by an aircraft carrier, into the South China Sea.

On Wednesday, US State Department spokesperson Ned Price told reporters “An armed attack against the Philippines’ armed forces, public vessels, or aircraft in the Pacific, including in the South China Sea, will trigger our obligations under the US-Philippines Mutual Defense Treaty,” claiming the vessels are part of China’s maritime militia, despite Beijing’s continued insistence they are regular fishing boats.

“As the situation in the West Philippine Sea evolves, we keep all our options open in managing the situation, including leveraging our partnerships with other nations such as the United States,” Pentagon spokesperson Arsenio Andolong also said.

However, the situation is not nearly so dire: Chinese diplomats have met not only with their Philippine counterparts several times in recent days, but with other members of the Association of Southeast Asian Nations (ASEAN) as well. China is not a member of ASEAN, but retains a working partnership with the 10-nation bloc. At these talks, the prevailing concern by both sides has been reviving and finalizing talks on the Code of Conduct (CoC) in the South China Sea, which would standardize maritime interactions in the waterway, including the question of where each nation’s fishing fleets could go, but which were paused due to the onset of the COVID-19 pandemic in early 2020.

Six nations have made overlapping claims on small islands and vast stretches of sea in the waterway, including China, Taiwan, the Philippines, Brunei, Malaysia, and Vietnam. A 2016 ruling by the Hague's Permanent Court of Arbitration found in favor of the Philippines against China, dismissing China’s Nine-Dash Line claim over South China Sea islands. However, the court also refused to award Manila the islands in question or to make any decisions about sovereignty. China and Taiwan both rejected the ruling, the latter having introduced the Nine-Dash Line as a Chinese claim in 1947, prior to its loss in the Chinese Civil War and the establishment of the People’s Republic of China (PRC) two years later. The seafloor surrounding the islands is believed to be rich in hydrocarbon deposits.

Since the ruling, China has shifted its claims toward a “four-sha” (four sands) position, based on claims to four island chains - the Paracel Islands (Xisha), Spratly Islands (Nansha), Pratas Islands (Dongsha) and the Macclesfield Bank (Zhongsha) - and their surrounding areas of raised seafloor, together amounting to about 80% of the South China Sea.

“As the year 2022 marks the 20th anniversary of the signing of the Declaration on the Conduct of Parties in the South China Sea (DOC), all parties will take it as an opportunity to fully and effectively implement the DOC and accelerate consultations on the ‘Code of Conduct in the South China Sea,’” Chinese Foreign Ministry spokesperson Zhao Lijiang told reporters about the Wang-Locsin meeting.

According to a Chinese Foreign Ministry report, Locsin spoke of their “unbreakable friendship” that “should become the stabilizing factor of the world’s geopolitical changes.” He noted Manila is committed to furthering their relationship and thanked Beijing for its extensive aid in fighting the COVID-19 pandemic.

Back in Manila, the rhetoric is a bit tougher, but even politicians advocating a counterbalance to China have placed advancing the CoC at the top of their concerns.

Phillippine Senator Risa Hontiveros, a member of the left-wing Akbayan party, said Tuesday ASEAN "should stand together against China’s bullying."

"We should put our differences aside and work towards the common goal of opposing unfounded and over-ambitious Chinese territorial claims in the region," she said, according to the Philippine Star, adding that “If ASEAN does not adopt a common stand on the South China Sea [code of conduct], we cannot safeguard our shared interests." The outlet quoted several other lawmakers with similar views.

In September 2020, Locsin said he was “honor bound” to push the CoC draft document forward to its third reading before Manila passed its leadership on the issue to Myanmar in 2021. However, little progress has been recorded since.

Vietnamese Prime Minister Nguyen Xuan Phuc mentioned at the ASEAN summit in November that all member states “look forward to the early conclusion of the code of conduct, which is effective, substantive, and consistent with international law, particularly the” 1982 United Nations Convention for the Law of the Sea. Philippine President Rodrigo Duterte also committed to fast-tracking the CoC at the summit.

US Inserts Itself into Regional Debate

However, while Washington postures as upholding international law and regularly cites UNCLOS in its deliberate flouting of Chinese maritime claims, it has remained opposed to the CoC being concluded directly between Beijing and the ASEAN states.

In October 2019, then-Assistant Secretary of State David Stilwell told a Senate Foreign Relations subcommittee that the US remained “skeptical of the PRC’s sincerity to negotiate a meaningful Code of Conduct that reinforces international law,” adding that if it benefits China’s maritime claims it “would be harmful to the region.”

Then in May 2020, the Council on Foreign Relations, an influential Washington, DC-based policy think tank, proposed that Washington foul the China-ASEAN negotiations, draw up a separate code of conduct with ASEAN nations amenable to its interests, and impose it on China.