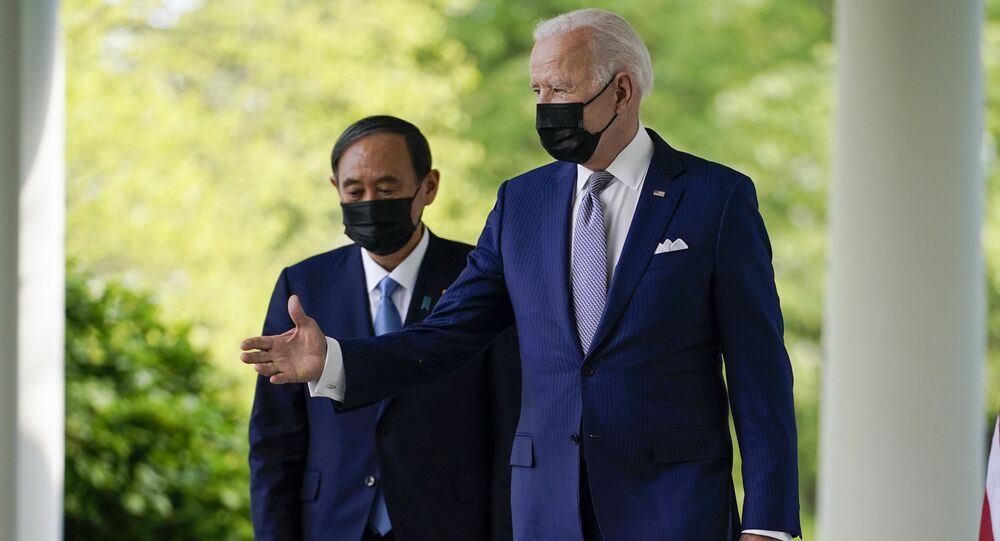 "It’s been my pleasure to welcome Prime Minister Suga to the White House," Biden said in during a press conference following the meeting on Friday. "This is our first in-person meeting here, the first head of state that I’ve asked in my administration to come to the White House."

Biden thanked Suga for making the long trip to Washington and noted they have already met virtually during the G7 meeting and the Quad leaders summit.

"I greatly appreciate the chance to spend time with you in-person and to make our exchange of ideas face-to-face. There is no substitute for face-to-face discussions," Biden said. "Both Prime Minister Suga and I value the incredible partnership that exists not just between our governments, but between the Japanese people and the American people."

Suga echoed Biden’s sentiments and emphasized that the US-Japan relationship is increasingly important given the security environment in the Indo-Pacific region.

Moreover, Biden announced the resumption of the Mansfield Fellowship Program - named after the late US Senator and Ambassador to Japan Mike Mansfield - that is designed to forge people-to-people connections between Japan and the United States.

The United States and Japan are committed to working together to confront challenges emanating from China and North Korea while opposing attempts to change the status quo in the Indo-Pacific region, but pursue diplomatic options, the leaders of the two countries said.

"Today, Prime Minister Suga and I affirmed our iron-clad support for US-Japanese alliance and for our shared security. We committed to working together to take on the challenges from China and on issues like the East China Sea, the South China Sea as well as North Korea to ensure the future of our free and open Indo-Pacific," US President Joe Biden said after a meeting with Japan’s Prime Minister Yoshihide Suga.

Biden described the meeting with Suga at the White House summit as "productive."

"We're going to work together across a range of fields, from promoting secure and reliable 5G networks, to increasing our cooperation on supply chains for critical sectors like semiconductors, to driving joint research in areas like AI [artificial intelligence], genomics, quantum computing and much more," Biden said on Friday.

In his turn, Prime Minister Suga said in a press briefing that the US and Japan both agree on the importance of stability in the Taiwan Strait.

"There is already an agreed recognition of the importance of peace and stability of the Taiwan straits between Japan and the United States which was reaffirmed on this occasion [during the meeting]," Suga said on Friday.

The US Navy previously stated that the destroyer USS John S. McCain, which passed through the Taiwan Strait last week, was making a "routine transit" and that the US military will continue to fly, sail, and operate anywhere where international law permits. The passage of the US warship caused a strong protest from Beijing.

Due to the regular sailing of US warships through the Taiwan Strait, China has previously accused the US of undermining peace and stability in the region.

Despite the fact that the United States, like many other nations, does not accept Taiwan as a sovereign nation and adheres to the "One China" policy, Washington has maintained informal links with the island since ending diplomatic relations in 1979.

Beijing considers Taiwan to be part of China, but Washington apparently rejects this argument by keeping informal relations with the self-governing island.