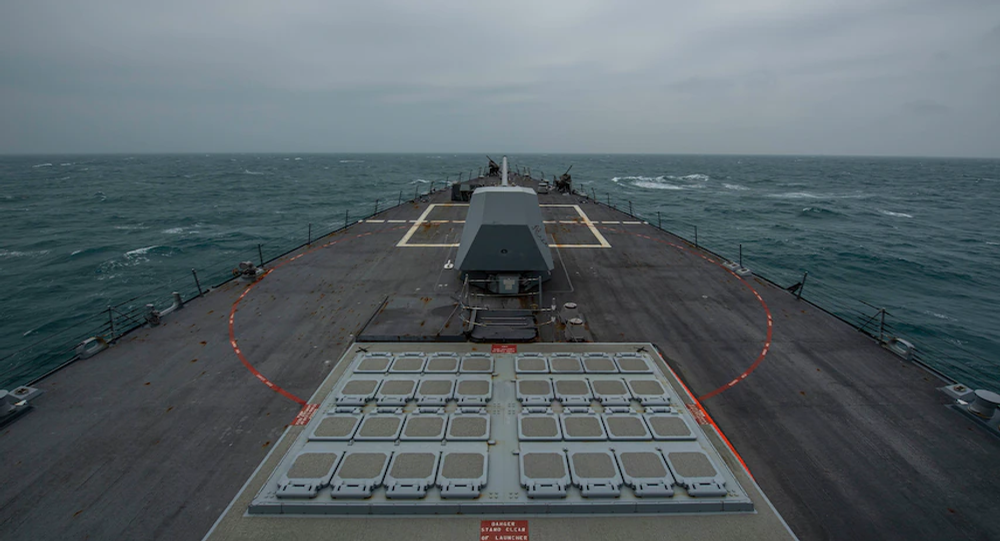 US-China tensions over Taiwan, the island territory which Beijing considers to be a renegade province of the People’s Republic, began escalating shortly after Joe Biden’s inauguration in January, with both countries deploying naval and air power to the area in shows of force.

The USS John Finn, an Arleigh Burke-class guided missile destroyer, sailed through the Taiwan Strait on Wednesday, the Navy’s 7th Fleet has reported.

The 7th Fleet’s public affairs office described the deployment as a “routine transit” conducted “in accordance with international law,” and called it a demonstration of “the US commitment to a free and open Indo-Pacific.”

The 7th Fleet also vowed that the US military would “continue to fly, sail, and operate anywhere international law allows.”

In a related development, the Navy reported Thursday that the USS Curtis Wilbur, another Arleigh Burke-class destroyer, had crossed the East China Sea amid its forward deployment in the western Pacific.

On watch and ready!

Wednesday’s sail by the USS John Finn was the third deployment of its kind since Biden’s 20 January inauguration, and comes amid escalating tensions between Washington and Beijing over the island.

On Tuesday, US Indo-Pacific Command chief Adm. Philip Davidson told Washington lawmakers that China may be planning to swallow up Taiwan within “the next six years”, and warned that China’s alleged growing military assertiveness in Asia risks creating a situation that’s “unfavourable” to the US from a security standpoint.

© AP Photo / Han Chao
Beijing Blasts US for Using Taiwan Issue to 'Hype Up' China's Military Threat
Chinese Foreign Ministry spokesman Zhao Lijian slapped down Davidson’s claims later in the week, accusing “some US people” of using “the Taiwan issue to hype up China’s military threat” as an excuse to increase America’s own military spending and interference abroad.

'High Sensitivity of the Taiwan Issue'

Tensions between Washington and Beijing over Taiwan jumped on the day Biden was inaugurated, with the island represented at the inauguration ceremony for the first time since the US severed diplomatic ties with the Republic of China (ROC) in 1979, in accordance with its adherence to the “One China” policy.

Washington continues to maintain informal diplomatic, economic and defence ties with the ROC. At Wednesday’s briefing, Zhao urged the US to “break off diplomatic ties with Taiwan and stop arms sales,” and to refrain from sending “false signals to the pro-Taiwan independence forces so as not to undermine Sino-US relations.”

A week earlier, Davidson urged the Biden administration to keep the arms sales in place, calling the US arms “critically important” amid the People’s Republic’s alleged regional military buildup of fighters, bombers and warships.

In early March, Foreign Minister Wang Yi urged Biden to “fully understand the high sensitivity of the Taiwan issue” and to abandon “dangerous practices of crossing the line and playing with fire.”

© CC BY 3.0 / Anagoria / Aerial view of Urumqi, Xinjiang Province, PR China
China Rebuts US Charge of Xinjiang 'Genocide' By Saying 95% of Native Americans Were Wiped Out
China-US relations fell to lows unseen since the Seventies under Donald Trump, with the Republican president launching a trade war against Beijing over its alleged “unfair” economic practices, and later accusing the People’s Republic of allowing the coronavirus pandemic to spread around the world. Instead of seeking to roll back tensions, the Biden administration has promised to be equally tough, accusing Beijing of adventurism in the Indo-Pacific, human rights abuses at home, and matching Trump on the “unfair trade practices” claims. Chinese officials have denied the claims and called on Washington not to meddle in China’s affairs.

Along with the US military activities, Taiwan has reported an escalation of Chinese military overflights in its so-called air defence identification zone (ADIZ) in recent months, with the People’s Liberation Army Air Force reportedly deploying dozens of bombers, fighters, reconnaissance and electronic warfare aircraft to the region in recent weeks.

China considers Taiwan to be a wayward province and hopes to see the island unify with the PRC at some point in the future. The island has long been governed by the successors of Chinese nationalist forces who fled to Taiwan after the end of the Chinese Civil War in 1949. Although Beijing claims Taiwan as its territory, Taipei formally claims all of mainland China, plus Mongolia, and territories belonging to Russia, Tajikistan, Pakistan, Afghanistan, Japan, India, Bhutan and Burma as its own. The ROC was expelled from the United Nations in 1971, with its UN seat transferred to the People’s Republic.