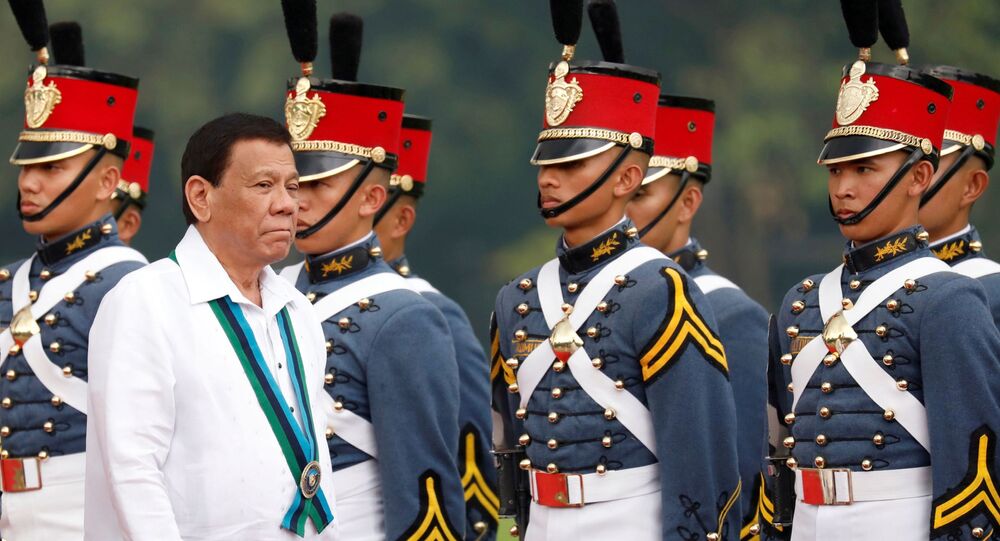 Duterte Wasn’t Threatening US With 'No Vaccine, No Visiting Forces' Remark, Spokesman Says

Philippine President Rodrigo Duterte announced in February that Manila was ending Philippines–United States Visiting Forces Agreement allowing American forces to be temporarily stationed in the country. The government later reversed its decision, greenlighting the deal’s functioning until the end of 2020.

Rodrigo Duterte’s spokesman Harry Roque said on Monday that the earlier remark made by the president of the Philippines about ending Visiting Forces Agreement (VFA) if the US fails to deliver millions of coronavirus vaccines was “not blackmail” but rather “an exercise of his independent foreign policy”, as quoted by Arab News.

On Saturday, Duterte said during a televised meeting with the Inter-Agency Task Force for the Management of Emerging Infectious Diseases (IATF-MEID) that the United States would not be welcomed in the country if they don’t provide Philippines with the newly registered Pfizer vaccine against COVID.

“The VFA is nearing its end. If they fail to deliver even a minimum of 20 million vaccines, they better get out. No vaccine, no stay here,” the president was quoted as saying.

“If you want to help, if America wants to help, you deliver. Stop talking. What we need is the vaccine, not your verbose speeches,” Duterte added.

His words were strongly condemned by Filipino senator Panfilo Lacson, who argued that “treating the Americans like a bunch of yokels might have sealed the Philippines’ fate” and apparently robbed the country of a chance to get the desired jabs.

“There must be a more diplomatic or at least a better way of asking a long-time ally to help us with vaccines for our people without sounding like we are blackmailing them,” the senator argued on Monday. “We had a good chance to procure vaccines early from the US, but someone from our side dropped the ball and has yet to be held accountable."

Duterte’s spokesman Roque responded to claims, saying that there was “nothing wrong” with the president’s words, as he still remains “the architect of the country’s foreign policy”.

“It’s not blackmail. What the president is trying to convey is that we are friends so we should be helping each other,” Roque maintained.

However, the Philippines Food and Drug Administration has not approved the use of any COVID vaccine so far although the president revealed on Monday that “many people” in the country have already been given shots developed by China’s Sinopharm pharmaceutical group.

During a meeting with the Cabinet, Duterte also publicly asked whether it was possible for him to be “vaccinated again when the Pfizer vaccine arrives”.

Roque confirmed that some officials from the president’s cabinet have already received shots “voluntarily”, but refused to confirm a “speculative” statement on whether Duterte has been given any COVID-19 vaccines so far.

The spokesman urged the public to “just accept that some government troops have been vaccinated” with Sinopharm vaccine, which he described as “the most widely used vaccine so far”.

In September, Duterte openly declared that Philippines would prioritise vaccines that are being produced in Russia and China, calling them "as good as any other on the market".

VFA Coming to an End

In February, Philippines notified the United States that it would terminate the key military pact that allows American troops, ships and planes to be temporarily stationed in the country and remain subject to US government jurisdiction. Later, Manila scrapped the decision, allowing the VFA to run until the end of 2020 with the possibility of extending it for six more months so both parties could “find a more enhanced, mutually beneficial, mutually agreeable, and more effective and lasting arrangement on how to move forward in its mutual defence”. Its renewal, however, has now been apparently conditioned by the delivery of the vaccines.