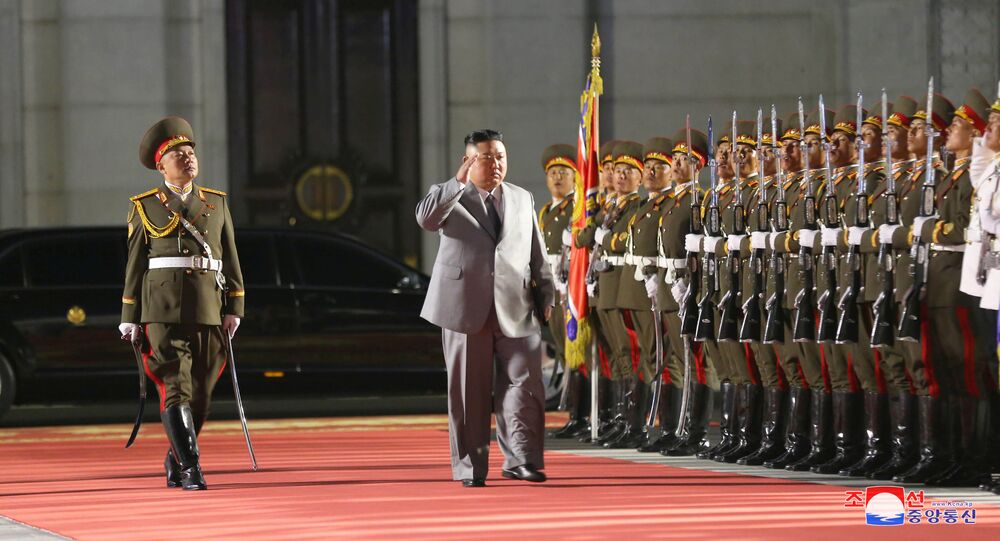 Influence of Kim Jong-un's Ex-Lover Growing in NK as She Is Spotted at Military Parade, Report Says

In April, North Korea’s Supreme Leader Kim Jong-un missed the celebration devoted to his grandfather's birthday, a major holiday in the country, sparking rumours about the state of his health and possible death. It was then suggested that his younger sister and a central figure in the Workers' Party of Korea, Kim Yo-jong, would take his place.

Kim Jong-un’s reported ex-lover Hyon Song-wol could have usurped his politician sister's power as she has been increasingly seen at the side of North Korea's supreme leader recently, The Sunday Times reported.

Hyon, a North Korean pop-star and ex-lead vocalist of all-women group Moranbong Band, was spotted next to Kim during a grand military parade in Pyongyang on 10 October, while performing duties usually assigned to the leader’s sister Kim Yo-jong, who instead was spotted seating next to lesser officials.

The 43-year-old singer, who was appointed a member of the Central Committee of the Workers' Party of Korea in 2017, has also been Kim’s occasional companion on official trips and even became a part of a small team that visited South Korea back in 2018 to discuss arrangements for the Winter Olympics.

According to reports citing South Korean intelligence, the two have been romantically involved for nearly 10 years, since the future leader of North Korea came back from Swiss school. However, the two are said to have broken up because of the disapproval of his father, Kim Jong-il. At some point it was even suggested by South Korean press that Hyon had been executed back in 2013. However, a year later she gave a speech at a national rally of art workers in Pyongyang.

Meanwhile, Kim’s wife, Ri Sol-ju, is reported not to have been seen in public since January, and some have suggested that she could have had another child, in addition to the three the couple is reported already to have. These reports have not been confirmed.

When in April 2020 Kim Jong-un did not appear at the ceremony marking the birthday of Kim Il-sung, the country's founder and his late grandfather, and skipped some other public events, there was a slew of speculations that he had fallen gravely ill, had undergone an operation or had even died. These rumours were not substantiated and later Kim appeared in public looking unscathed.

However, during the time of uncertainty it was suggested that it would be 32-year-old Kim Yo-jong, the first Deputy director of the United Front Department of the Workers' Party of Korea, who would assume his role as a country’s leader in case of the ruler’s demise.

In July, South Korea prosecutor’s office was said to have opened an investigation into Kim Yo-jong over the destruction of a liaison office in June which was located in Kaesong - the border town between the two Koreas. Previously, Kim Yo-jong threatened to get rid of the communication center allegedly because of South Korea’s propaganda leaflets.