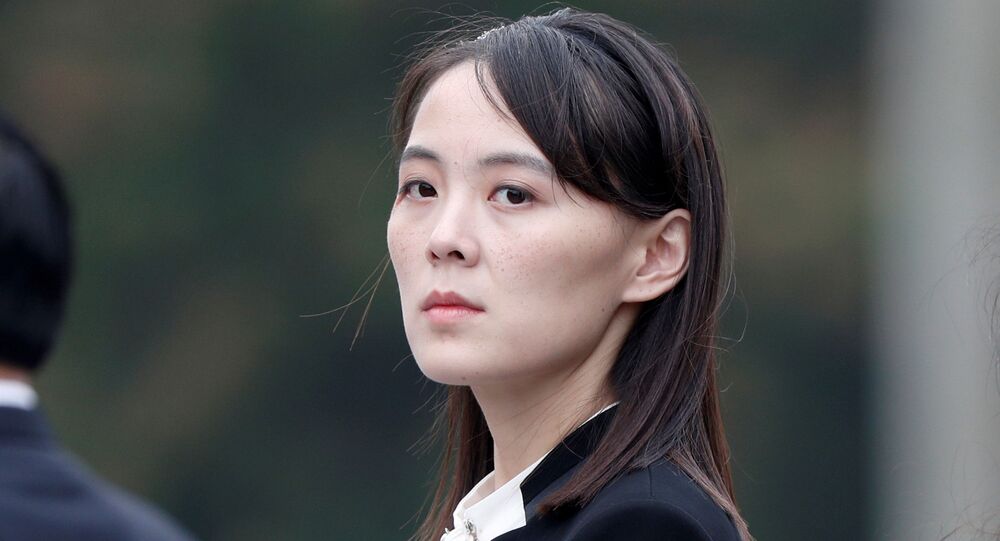 Kim Jong-un’s younger sister, who is currently first vice-department director of the DPRK Workers’ Party is believed to be the number two in the country’s leadership and the most trusted person in Kim Jong-un’s inner circle, as she was seen by her brother’s side at key state meetings.

Kim Yo-jong, the younger sister of North Korean leader Kim Jong-un and a prominent Workers’ Party member, is among the most likely candidates to succeed him should he die or be unable to run the country, according to a US Congressional Research Service report, cited by the South Korean news agency Yonhap.

The document came out amid widespread speculation about Kim Jong-un’s whereabouts and well-being and essentially underpins recent media reports about the likelihood of Kim Yo-jong succeeding her brother should anything grave happen.

"The 36-year-old Kim, obese and a heavy smoker, is believed to have suffered from various health problems over the years", says the updated report on US-North Korea relations.

It goes on to detail some of Kim’s family aspects, saying the politician, who is now missing from international radars could have three children aged under 10, but “no obvious heir".

“If he dies or becomes incapacitated, it is uncertain who would succeed him", the document says pondering the high probability of “sister and confidante” Kim Yo-jong taking over power in such an event.

Kim Yo-jong, who has been progressing quickly through the ruling party ranks over the past few years, played a prominent role in her brother's diplomacy being by his side at key state meetings, such as his summits with President Donald Trump in Singapore and Hanoi, Vietnam last year. However, analysts wonder whether a woman could take up the reins of the country, especially without being explicitly blessed by her brother, the report says.

The CRS goes further to note that any power struggle may have major implications for the United States, including on such burning issues as North Korea's nuclear arsenal and the possibility of a confrontation with China that could "alter the fundamental security structure of the region” etc.

It cites experts doubting North Korea's official statistics of no confirmed cases of COVID-19, despite the country sharing a border with China, where the outbreak is believed to have officially started. Whatever the case, the country's health system does not appear to have become overwhelmed, purportedly due to its border closures and other strict measures.

In the latest possible explanation for the North Korean leader’s 20-day (so far) absence from public life, South Korean and US officials assumed Kim Jong-un is not at all ill and could be sheltering from the coronavirus crisis. For instance, South Korea's Unification Minister Kim Yeon-chul suggested that the situation may indeed have something to do with the raging coronavirus crisis, and the leader's absence is thus hardly unusual, while President Trump earlier stressed that all the reports about Kim's poor health are yet unproven.

It has been suggested that one of Kim's possible whereabouts is Wonsan, the elite historic resort on North Korea’s east coast, where satellite imagery has reportedly witnessed movements of luxury boats commonly used by Kim Jong-un and his personal train.

Kim dropped out of the public eye on 11 April, but it wasn’t until several days later that a myriad of rumours emerged about his well-being when he missed the landmark celebration of the Day of the Sun on 15 April, honouring Kim’s grandfather and DPRK founder Kim Il Sung.

Rumours have since been amassing about Kim being anything from slightly unwell to lingering “in a vegetative state” unable to walk unassisted after a reported operation. None of them have been confirmed by any of the country’s authorities or the international community.

Russia Lawmaker After Talks With N.Korea Ambassador: No Reason to Worry About Kim's Health