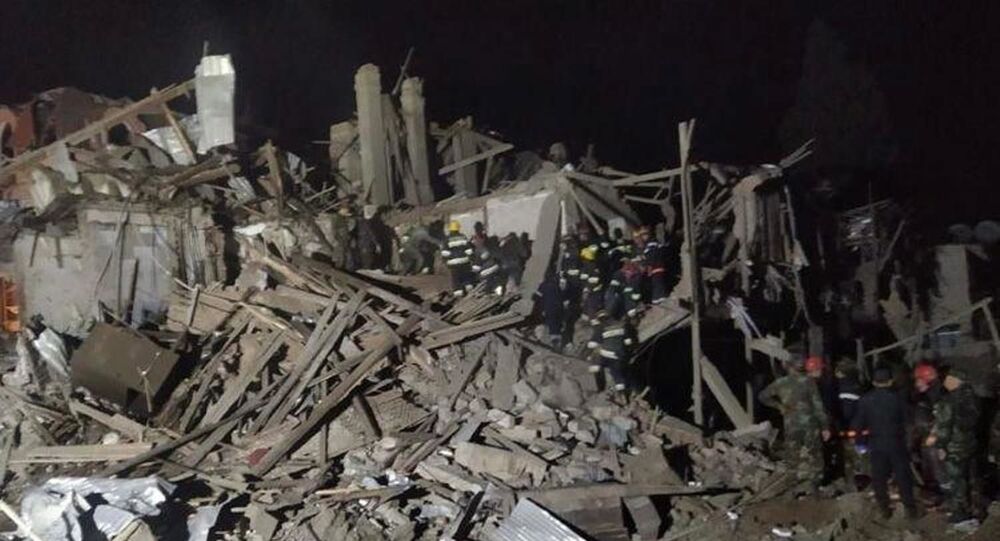 Earlier in the day, Azeri Ministry of Defence said that the city of Ganja has been attacked by the Armenian forces. Before that, Nagorno-Karabakh, an unrecognised ethnically Armenian republic within Azerbaijan, asserted that several large villages were attacked by the Azeri army, despite the ceasefire brokered by Moscow on 10 October.

The Azeri Prosecutor General's Office stated Sunday that at least five people had died and 28 others were injured as a result of shelling in Ganja, where a rocket destroyed a residential building.

Earlier, Azerbaijan's Emergencies Ministry said at least five dead bodies were recovered from the debris, while 17 more people were injured.

"As a result of the rocket fire, a residential building was fully destroyed. As of now, the bodies of five dead have been recovered from the rubble; there are 17 wounded. Rescuers are working on the spot," the Sunday statement from the press service of Azerbaijan’s Ministry of Emergency Situations said.

On early Sunday, the Azeri Defence Ministry said that Ganja, the second largest city in the country, had been shelled by Armenian forces. The statement followed an announcement made by Nagorno-Karabakh that several large villages had been attacked by the Azeri forces.

Earlier, a Sputnik correspondent reported from the scene that several explosions had been heard in Stepanakert, the unrecognised republic's capital, despite the ceasefire earlier brokered by Russia.

Peace talks in Moscow regarding the ceasefire laster for over 10 hours on 9-10 October, with foreign ministers of Russia, Armenia and Azerbaijan negotiating ending the hostilities in the region of Nagorno-Karabakh. The talks resulted in a joint statement from the three parties envisaging the ceasefire, beginning from 10 October, in order for the sides to exchange prisoners and bodies of those killed.

The conflict in the unrecognized republic escalated on 27 September, with both Armenia and Azerbaijan accusing each other of sparking hostilities.

The international community, including Russia, France, the UN, the US and others, has been calling for a ceasefire between the parties and a return to negotiations, while Turkey has voiced its support for Azerbaijan.

The Nagorno-Karabakh conflict began in 1988, when the region attempted to secede from Soviet Azerbaijan. The hostilities spiralled into a war that concluded in 1994 with a ceasefire. Since 1992, the OSCE-mediated Minsk group that includes Russia, the US and France has been holding negotiations to settle the conflict.