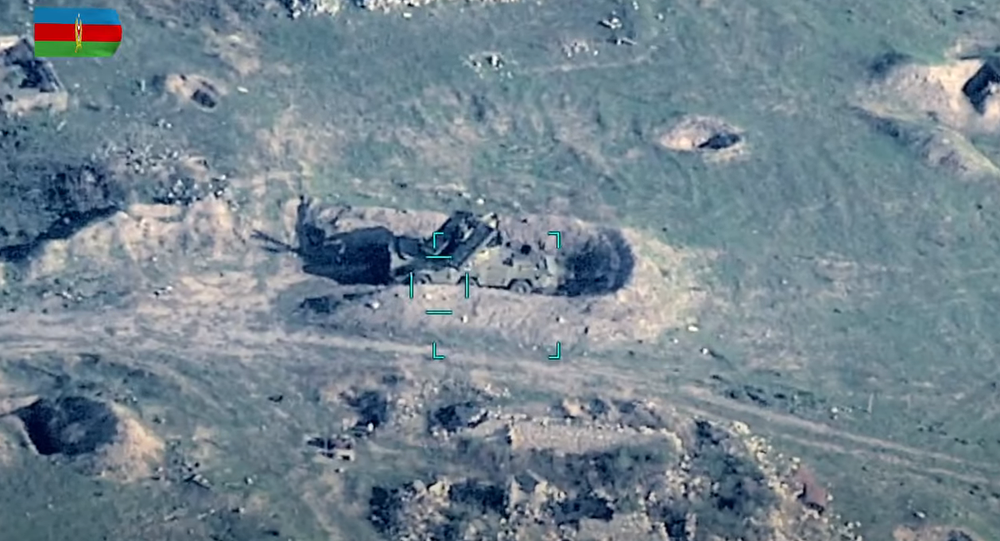 Armenia and Azerbaijan agreed to halt fighting in Nagorno-Karabakh Friday night after ten hours of intense negotiations between the countries’ foreign ministers facilitated by Moscow. The ceasefire came into effect Saturday at noon, after nearly two weeks of uninterrupted fighting in the contested South Caucasus region.

Azerbaijan’s defence ministry has released footage of the destruction of ‘Armenian’ artillery, tanks and air defence systems which it claims violated the ceasefire on Saturday.

Warning: Footage below may not be suitable for all viewers.

The first video shows attacks from the air on multiple artillery pieces and troops in trenches. The second shows strikes on enemy armoured vehicles. A third shows the destruction of enemy air defence systems.

Earlier Saturday, Azerbaijan’s defence ministry accused the Armenian side of attempting to carry out an offensive to regain territories lost in recent fighting. “As a result of preventative measures taken by our forces, the enemy, suffering numerous losses in manpower and equipment, was forced to retreat,” the ministry said in a statement.

According to Azerbaijani authorities, enemy artillery shelling of villages in southwestern Azerbaijani regions of Terter and Agdam killed a 46-year-old civilian.

The Armenian defence ministry claims it was the Azerbaijani side that broke the ceasefire. According to  ministry spokeswoman Shushan Stepanyan, forces from the Karabakh Defence Army took “appropriate measures to repel the enemy’s attack.”

On Saturday evening, a Sputnik correspondent in Stepanakert, capital of the self-proclaimed Nagorno-Karabakh republic, reported that an air-raid siren had sounded, prompting local residents to run for cover to basements and bomb shelters.

The ceasefire in Nagorno-Karabakh formally stepped into force at 12:00 pm local time October 10. However, both sides have since accused one another of violating the agreement to halt hostilities.

In an interview which aired Saturday, Armenian Prime Minister Nikol Pashinyan told Germany’s ZDF TV that Armenian recognition of Nagorno-Karabakh may be ‘a way out of the current situation’. Accusing of Azerbaijan of seeking to carry out an ethnic cleansing campaign in Karabakh with Turkey's support, Pashinyan reiterated the Armenian side’s allegation that mercenaries from Syria are being used in the conflict. Baku has repeatedly dismissed the 'mercenaries' claims, and suggested that its operations in Karabakh were aimed at 'liberating' the region.

Nagorno-Karabakh saw an explosion of fighting on September 27, with each side accusing the other of sparking the hostilities. The flare-up has led to the deaths of over 50 civilians, with more than 250 others receiving injuries of varying severity. The Armenian side claims that over 4,300 Azeri troops and mercenaries have been killed in the fighting, while Azerbaijan claims that over 2,300 Armenian troops have been killed or injured. Between 70,000-75,000 civilians from Nagorno-Karabakh are reported to have been displaced.

© Sputnik / Рубен Мангасарян
How a Senior Gorbachev Advisor’s Involvement in Karabakh Conflict Helped Set Region on Fire
The conflict between Armenians and Azerbaijanis over Nagorno-Karabakh has raged for over thirty years, and started in the late 1980s, when nationalist sentiments unleashed by the perestroika reforms initiated by Moscow prompted Armenians living in the Nagorno-Karabakh Autonomous Region of the Azerbaijani Soviet Republic to try to secede to join the Armenian Soviet Republic proper. Baku attempted to prevent this from happening, and in late 1991 abolished the region’s autonomous status. From 1992-1994, Armenian militias and the Azerbaijani Army waged a full-scale war for control of the region, with over 30,000 troops, militiamen and civilians from both sides killed. As many as 1.1 million Armenians and Azerbaijanis, both within Karabakh and from other areas of the two republics, were forced to flee their homes as a result of the conflict.
...
Reddit
Google+
Blogger
Pinterest
StumbleUpon
Telegram
WhatsApp
1516

Armenia Shares Video of 'Azerbaijani Tank' Being Destroyed in Karabakh