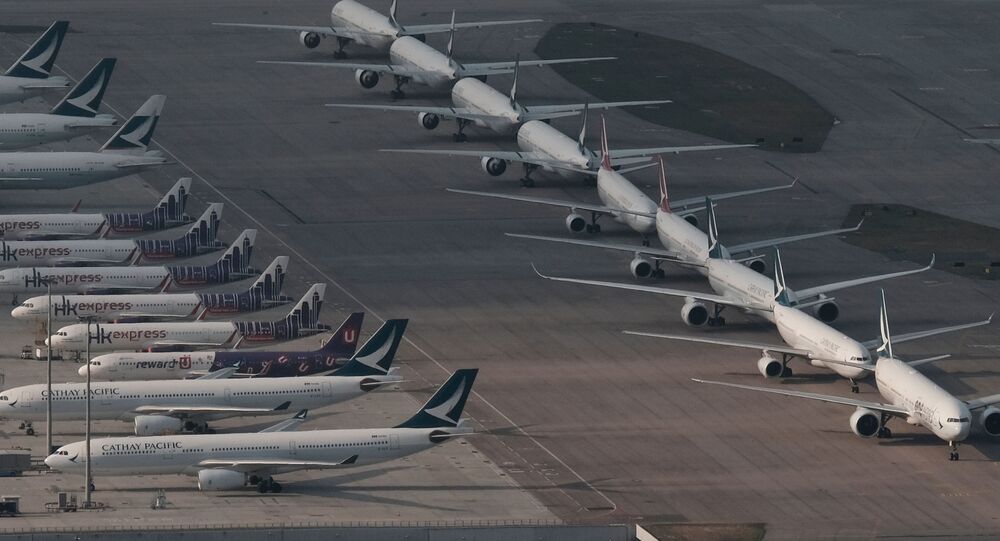 While calls to urge China to ban flights from European countries like the UK and Sweden have intensified due to these countries' passive response to the coronavirus outbreak, Beijing has escalated prevention measures by requiring all arrivals from overseas to undergo 14-day mandatory quarantine in designated places.

All overseas arrivals to Beijing will have to be sent to designated venues for quarantine for 14 days at their own cost, effective from Monday, Chen Bei, deputy secretary-general of the Beijing municipal government, told a press conference on Sunday.

This is an escalation from a measure it announced last week which required all passengers arriving in the capital from overseas to self-quarantine, either at home or in a designated facility, for two complete weeks.

The World Health Organisation said during the weekend that Europe has become the epicentre of the pandemic, with more reported cases and deaths than the rest of the world combined, apart from China. Major virus-stricken countries including Italy, Spain and France recorded increases in both confirmed cases and deaths. The coronavirus death toll hit 1,441 as of Sunday morning in Italy, with total cases increasing to 21,157, becoming the second most affected country after China.

However, the methods of handling the public health crisis in Europe have prompted serious concerns among the Chinese public, especially the UK's strategy of "herd immunity," which has sparked outrage not only in Britain but also in China, as the latter paid a heavy price to bring the epidemic under control.

Such a laissez-faire mindset and lax measures are considered extremely irresponsible and risk causing a rebound in China due to the growing number of imported infections, prompting some to call for a ban on flights from countries like the UK and stricter customs measures for entry to be adopted.

The passiveness in handling the epidemic also sparked concerns among Chinese living in countries such as Italy, Spain and the UK, including parents of many Chinese students abroad, who are now considering returning to China amid looming massive outbreaks in foreign countries.

Patrick Vallance, the UK government's chief scientific adviser, said in broadcast interviews Friday that Britain could let about 60 percent of the population become infected with the COVID-19 for "herd immunity" to take effect in fighting a pandemic after Prime Minister Boris Johnson said that "many more" families will lose loved ones. The UK government's tactic has alarmed and shocked people around the world, with some observers and doctors openly criticizing it as "madness."

Zeng Guang, chief epidemiologist of the Chinese Center for Disease Control and Prevention (China CDC), expressed worries over the UK's lacklustre management of the COVID-19 pandemic, which he said would probably result in a large number of deaths.

Some Twitter users called the UK government's flat-out refusal to even attempt to stop the spread of the virus an "evil crime against its own citizens."

Seema Yasmin, a clinical assistant professor at Stanford University, said in a tweet posted during the weekend that when the British government advocates letting the virus spread so that 60 percent of the population becomes infected, that actually means "39.6 million infected, 2 million critically ill and 277,000 deaths."

The National Health Commission reported 20 new confirmed cases in the Chinese mainland on Saturday, among which 16 were imported cases, official data showed.

This was a consecutive increase of imported infection cases for the third day in a row, which has become a major threat to cities like Beijing, Shanghai and Guangzhou in Southern China's Guangdong Province that handles the majority of international flights.

Particularly, when the whole country has made a huge sacrifice by implementing the strictest ever measures in combating the disease, shutting down businesses and advising millions of people to stay indoors.

It has locked down Wuhan in Central China's Hubei Province, where the first confirmed coronavirus case was reported in the country, for nearly two months to offer the window of opportunity to the rest of China and the world in containing the viral spread.

Sweden has also adopted less restrictive measures, including letting schools open and limiting coronavirus testing to patients who need hospital treatment or elderly care and who are showing symptoms, which are considered by observers as irresponsible and harmful to the world.

From now on, it will be necessary for China to ban flights from certain countries for a certain period, as the way the outbreak is being handled in some European countries like the UK may put huge pressure on China, given the possible flows of arrivals from those places, Li Haidong, professor at the Institute of International Relations of the China Foreign Affairs University, told the Global Times on Sunday.

"Excessive prevention measures are better than an insufficient response," Li said, noting that due to growing uncertainties, China would spare no efforts to prevent imported cases of infection as lack of measures would cause severe consequences.

Some observers also suggested adopting the strictest measures in curbing imported cases as the country, instead of scoring a full-scale victory in viral combat, could not afford another battle like the one in safeguarding Wuhan and Hubei.

Due to growing concerns over the less effective measures taken by governments of some European countries, some Chinese expats living in Paris and Rome set up online groups on social media to coordinate supplies and inform each other tips for self-protection amid the outbreaks in the countries where they now live. Among priorities, they are following the same social distancing measures taken in China by undergoing self-quarantine.

The growing uncertainties in prevention and control work in some European countries has put China under greater pressure to contain imported cases of infection, as more Chinese living abroad may consider coming back due to growing risks of becoming infected overseas, Zhou Zijun, a professor at Peking University's School of Public Health, told the Global Times on Sunday.

"It's necessary for us to escalate measures to tackle these potential risks, however, influxes of returnees would create pressure on China, regarding prevention measures," he said.

A Chinese national called Fiona, who works in Paris arrived at Beijing Capital International Airport on Sunday around 11:30 am, where all flights from the overseas dock at specially designated areas and all passengers aboard will be screened via methods such as temperature checks before entering. She finally was able to leave the airport at around 17:00 pm. After going through a series of procedures, she was transferred via a shuttle bus to the new China International Exhibition Center in Shunyi, a northeast suburb of Beijing, being used as a temporary quarantine centre for travellers from epidemic-hit countries.

She told the Global Times in a recent interview that it was not an easy decision for her to come back to China amid the outbreak as risks of getting infected during the trip and bringing the virus back home remain high, but staying in Paris has become more worrisome considering less restrictive measures there, lack of consciousness of taking the pandemic seriously and ongoing Yellow Vest protests, which defy coronavirus containment measures.

"I disagree with those people in China who bluntly praise Western countries for their so-called freedom of speech and human rights when it comes to the coronavirus, how can they possibly handle the issue effectively?" she asked.

© REUTERS / POOL
Key Brexit Talks Cancelled Due to Coronavirus, Will UK Seek to Extend Transition Period?
Imported cases will not affect China's steps to resume production and education," Zeng from China CDC told the Global Times. He estimated that the risks of secondary transmission of imported cases and third-generation transmission are low due to the country's strict viral management.

"Currently, China needs to, on one hand, keep fighting to eliminate local new cases; on the other, control imported cases.  The situation might last for a few months until an effective vaccine is developed," he said.

Still, Zeng does not suggest Chinese living overseas flood back to China, especially those who already have fevers, given the risks of viral infection and transmission during the travel.

"Staying at home and good protection is sufficient," he said.