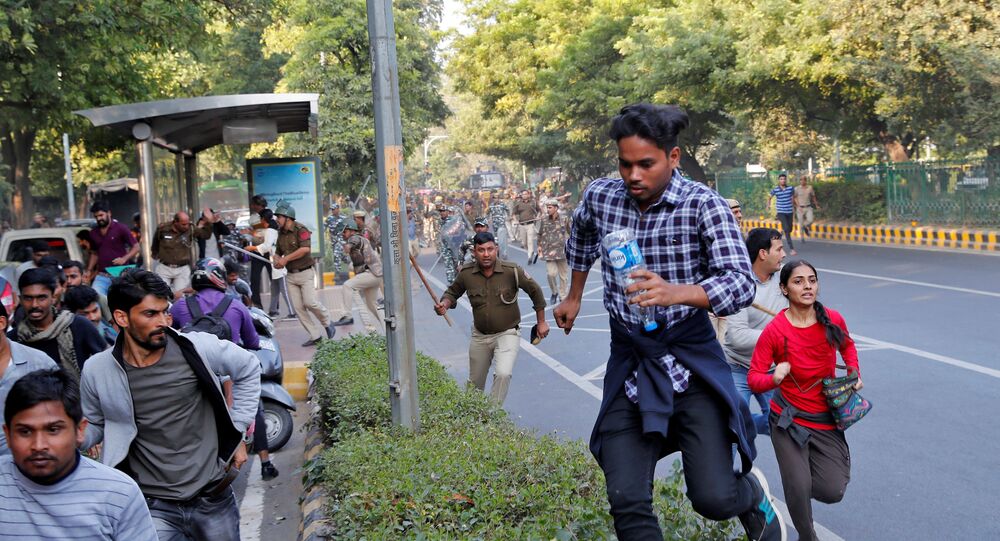 New Delhi (Sputnik): Students of the Jawaharlal Nehru University (JNU) have been protesting for the past several days, demanding a complete rollback of a proposed hike in hostel fees, along with reconvening the Inter-Hall Administration meeting which passed the proposed fee hike last month.

The protest was staged by DUSU, a student body representing the Delhi University and led by Akhil Bharatiya Vidyarthi Parishad (ABVP).

ABVP is the student wing of RSS, the parent organisation of the federally-ruling Bharatiya Janata Party (BJP) of India.

The ABVP-led Delhi University student union organised a march to the education minister’s office, but were halted near the parliament were Section 144 (which prohibits the assembly of more than 4 people in an area) is imposed during the ongoing parliament Winter Session.

Delhi police put up a triple layer of barricades. Some protesters, however, climbed over the barricades and scuffled with security personnel – the paramilitary CRPF force and Delhi police.

Several students, including top members of the ABVP group and the DUSU, were detained following the scuffle near the Parliament Street police station.

Protesters raised slogans against the JNU administration and the Human Resource Development (education) Ministry who, according to students, had unilaterally imposed fee hikes on the students.

The JNU Students Union (JNUSU) also seeks the resignation of Vice-Chancellor Mamidala Jagadesh Kumar, pointing out that students and teachers have lost faith in his ability.