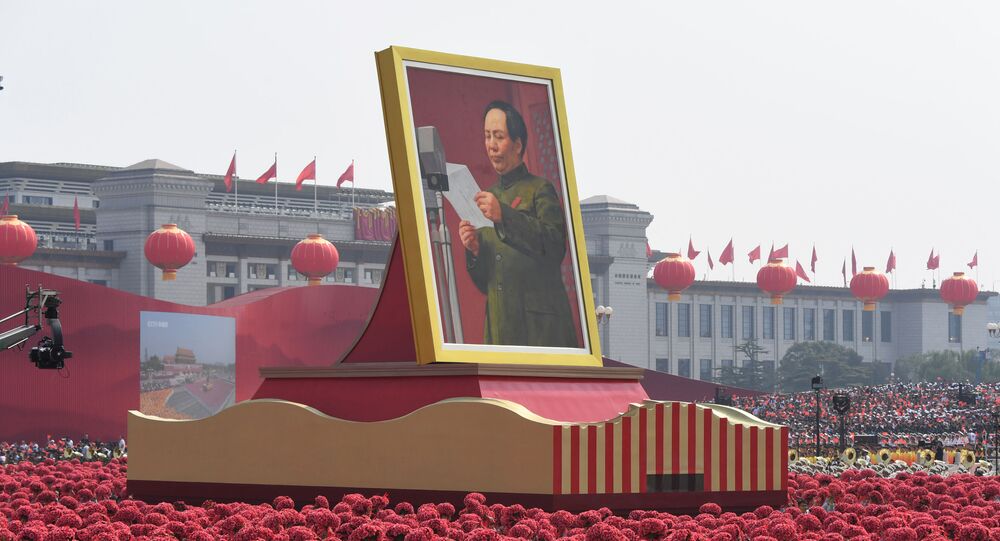 BEIJING (Sputnik) - Seventy years ago, on October 1, 1949, Mao Zedong, the Chairman of the Communist Party of China, proclaimed the establishment of the People’s Republic of China (PRC) during a ceremony on Tiananmen Square in Beijing.

Ravaged by war, the country was poor and hungry back then. However, over seven decades, China has managed to become an economic superpower and impressed the whole world with its unprecedented pace of development.

On Tuesday, Beijing is hosting large-scale celebrations that mark the anniversary of the republic. The activities include one of the country’s largest military parades, which will showcase the most advanced equipment in service with the Chinese army.

However, the celebrations may be overshadowed by the ongoing anti-government protests in Hong Kong.

According to statistics, China accounts for 30 per cent of the global GDP. Currently, China is the world’s second-largest economy, just behind the United States. Ding Yifan, the senior researcher at an international think tank in China, the Taihe Institute, said that China had managed to achieve unprecedented success in the economy during its first five-year plan, and this was largely due to the Soviet Union.

"At that time, China was just miserable, occupying a very small share of the global economy. Back then, Mao Zedong called China a clean slate, but you can make a beautiful drawing on this blank sheet. China started its development from scratch: not only was the industry a failure but so was agriculture," the expert said.

He noted that during the first five-year period, from 1952 to 1957, China, with the help of the Soviet Union, began the country’s industrial development.

"During this period, China was able to achieve unprecedented success, not only in the history of China but in the world’s history as a whole. The first five-year period laid the foundation for the beginning of China’s industrial development… There has never been a single country in the world that could lay the foundation for industrialization in five years, and China was able to do that. But these achievements have led to risky actions, China made a huge mistake, namely the Great Leap Forward policy," the economist explained.

After entering the 21st century, China joined the World Trade Organization and many of the barriers that had existed in the past were removed. Then, China’s development was, to a very large extent, linked to the weakening of international conditions and export growth. Afterwards, the Chinese economy grew by about 10 per cent per year, and export growth was at about 20 per cent — these were the reasons for China's rapid growth to the second world economy, the expert noted.

The ongoing trade war with the United States, which began after US President Donald Trump came to power, has already affected not only China’s economy but also the economy of other countries. However, according to Ding, US actions are unable to shake such a strong economy like the one in China.

"I think one of the reasons why there have been such serious trade tensions in recent years is that no one has ever witnessed such an amazing growth rate. In the process of rapid economic growth, China has created production chains. According to the United Nations, China is the only country in the world with the most complete industrial sector in all areas ... Therefore, this trade war cannot shake such a perfect economy as China," the expert continued.

He also noted that a lot of economies, including the United States, depended on China and needed a supply of various products from it to complete their production processes.

"Therefore, this trade war may ultimately lead to a decline in their manufacturing industry, because investors will make less and less investments," Ding added.

China is a permanent member of the UN Security Council and has the power of veto. The status of the world’s second-largest economy inevitably gives Beijing other levers of influence in the international arena.

According to Ding, in the future, China can become a hope for stability for the whole world.

"The world has been very unstable since the 21st century, especially after the United States launched widespread military operations following the [9/11] terrorist attacks. If the United States had not started a war in Iraq, there would not have been such a surge of terrorism in the world. The United States did not make the world more democratic but, to the contrary, created even more chaos with its military intervention. In this situation, only China can bring stability to the world because China is not only developing well but also provides others with space for the development," the economist said.

He added that in recent years, China’s contribution to the global GDP has been almost 30 per cent, which played a very important role in stabilizing the world economy. Also, providing assistance to other countries is part of China’s foreign policy.

"China’s ability to become a leader and its influence will increase day by day. Therefore, I believe that in the future, China will continue to play such a role, transform the world order, bring stability and give hope to the world," the expert concluded.

While there are celebrations in Beijing, which will be attended by the head of the Hong Kong administration, Carrie Lam, the situation in the world's financial hub is far from festive.

Last weekend’s regular protests once again escalated into violent clashes between police and protesters. Law enforcement officers used water cannons, tear gas and rubber bullets to disperse the crowd. The demonstrators, in turn, threw bricks and Molotov cocktails at the police, as well as set fires.

On Tuesday, the demonstrators are prepared to march during a rally, although without police approval. For security reasons, the Hong Kong government was forced to cancel the festive fireworks and to move the flag-raising ceremony from the street to government premises.

Protesters call the planned rally the "Day of Sorrow."

According to a statement from the Hong Kong government, Lam will return to Hong Kong on the evening of October 1.