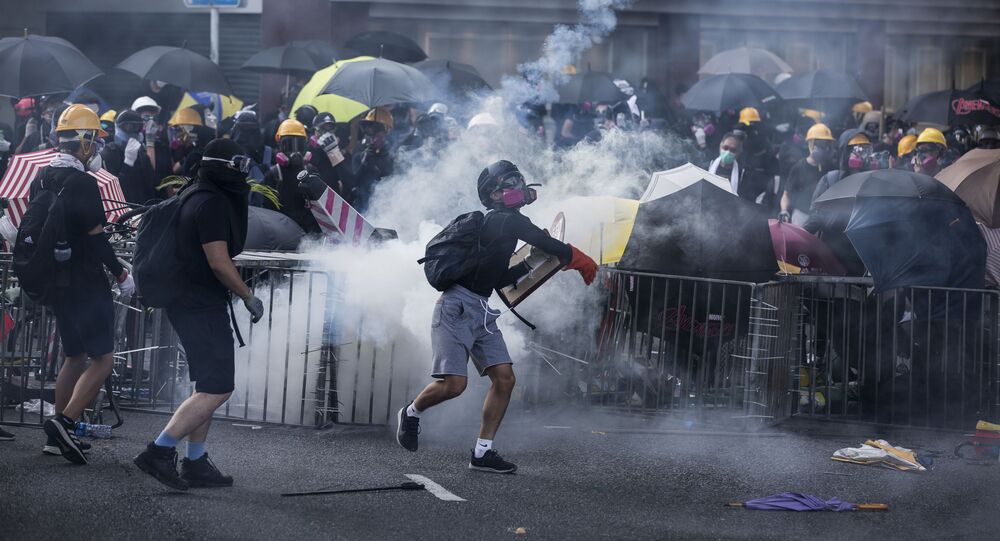 Earlier on Tuesday, the staff was urgently evacuated from Hong Kong's parliament building, the Legislative Council, amid violent clashes between protesters and the police.

Hong Kong’s police have detained more than 50 people who are suspected of producing Molotov cocktails and explosives for mass rallies, RTHK broadcaster has reported. It added that police found several facilities where Molotov cocktails and explosives were being produced. As part of the raids, 51 people were detained on suspicions of stockpiling blunt weapons and illegal assembly.

According to the broadcaster, as many as 15 people were injured in violent clashes between Hong Kong protesters and the local police and have been hospitalized.

Earlier on Tuesday, the Hong Kong parliament, the Legislative Council, announced urgent evacuation of its staff amid ongoing rallies.

A few protesters were apprehended by police officers in Hong Kong for their possible involvement in violence during the protests on Tuesday, a Sputnik correspondent reported. The protesters, seemingly in their early 20s, were arrested at the building known as York Place in Hong Kong. When the correspondent asked a female officer at the scene of the detention why the people were being detained, she declined to give any reasons and referred any related questions to her supervisors.

© AFP 2020 / MOHD RASFAN
A protester builds a wall in the street with bricks from the pavement during demonstrations in the Wanchai district in Hong Kong on October 1, 2019, as the city observes the National Day holiday to mark the 70th anniversary of communist China's founding.

Also on Tuesday, Hong Kong's railway operator MTR closed a total of 19 subway stations due to public unrest, according to the administration of the subway system.

Over the past months, Hong Kong has faced waves of rallies against now-withdrawn amendments to its extradition law, which proposed extraditing fugitives to mainland China. Rallies continued even after the bill was scrapped, with protesters demanding an investigation into alleged police violence, denied by the law enforcement, and end of legal proceedings against participants of the rallies.