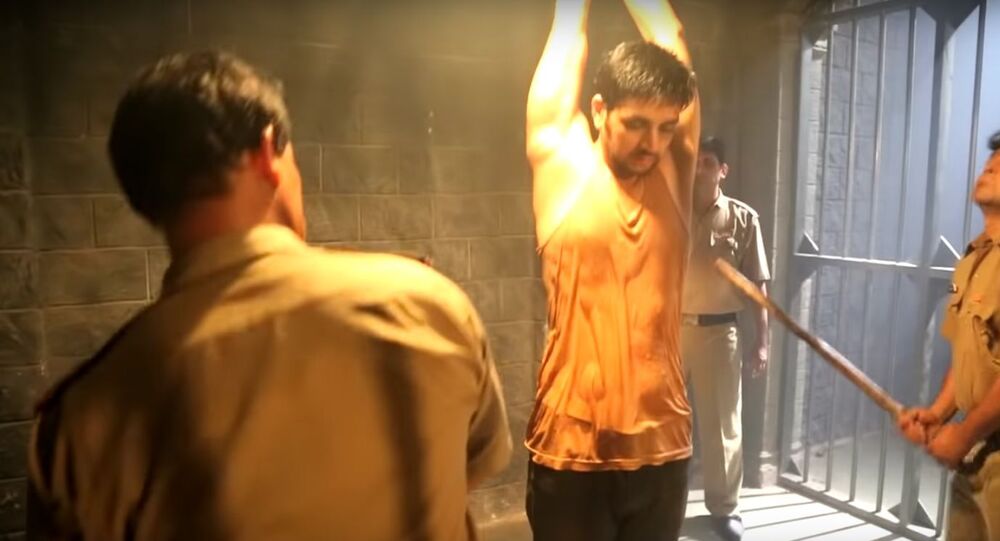 New Delhi (Sputnik): A series of pictures making the rounds on social media, claiming to be of a Kashmiri journalist being tortured by the Indian Army, has actually turned out to be still shots from an Indian TV series.

This comes after former Pakistani envoy to India Abdul Basit was ridiculed by social media users for sharing a screengrab from a pornographic film of Johnny Sins mistaking it to be a Kashmiri man who lost his vision by pallet gun.

As per the findings of AFP Fact Check, a global news agency, the viral images on internet are from the Indian TV series “Meri Aashiqui Tumse Hi”.

The images are part of a scene showing protagonist Shakti Arora being beaten by police in prison.

The images were widely shared on social media on 28 August, in a bid to put down the Indian Army and to highlight the “torture” inflicted upon Kashmiris as security forces have been deployed there to prevent any untoward incident following the Indian Parliament's decision to abrogate Kashmir’s special status.

The misleading post, claiming to be of Kashmiri journalist Fahad Bhat read: “Last night Indian Army arrested Kashmiri Journalist 'Fahad Bhat' from his home. They are torturing him. World has time for Amazon Forests but no time for Kashmiris. WHY?”

Last night Indian Army arrested Kashmiri Journalist 'Fahad Bhat' from his home. They are torturing him. World has time for Amazon Forests but no time for kashmiris. WHY ?#RoadToFreeKashmir #KashmirBleeds pic.twitter.com/t4ZgQVD35N

Also, no record of a Kashmiri journalist named Fahad Bhat was found by AFP.

Many Indians also took to Twitter and slammed those spreading fake news about Kashmir on social media.

Here you could use other pictures in this shooting of TV serial to discredit and cause law and Order problem in Kashmir.
It will also help you to make more fake tweets for ulterior motive and malafide intentions. https://t.co/0FpgWlq0iD

Earlier, a similar attempt to malign India’s image was made by Former Pakistani envoy to India Abdul Basit, who shared a screengrab from a pornographic film of Johnny Sins claiming it to be a Kashmiri man who lost his vision by pallet gun. However, the post was soon deleted by him but its screenshots were widely shared on social media.

Tempers have been running high between Indian and Pakistani social media activists, after New Delhi stripped Jammu and Kashmir of its special status on 5 August. Both sides use social media to jab at each other, using fake images, videos and memes.