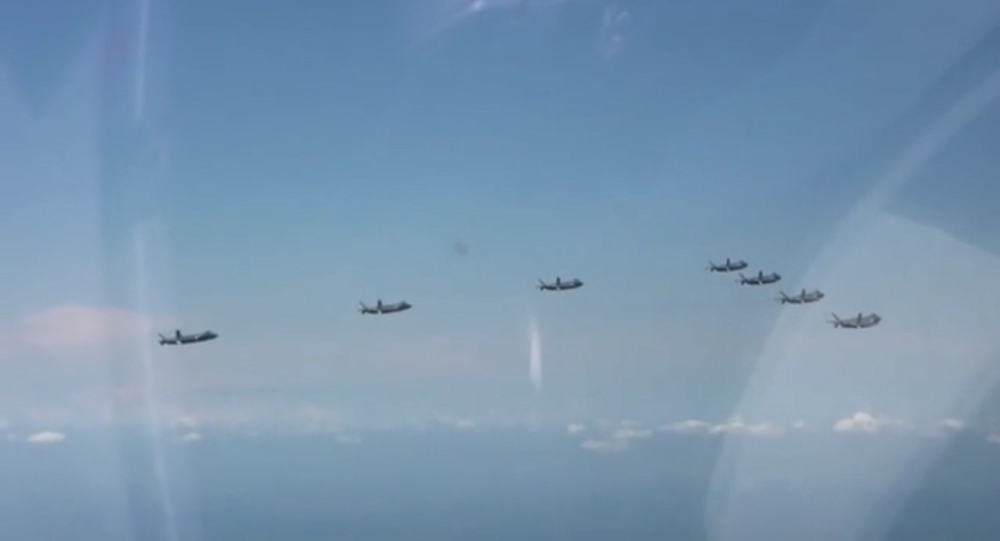 A promotional video released by the People’s Liberation Army Air Force (PLAAF) on Tuesday showcased the largest formation of Chengdu J-20s seen yet: seven of the stealthy jets can be spotted, illustrating the service’s growing fifth-generation air power.

The occasion for the video, which aired Tuesday on Chinese television, was the 74th anniversary of the victory in the War of Resistance against Japanese Aggression in 1945, the Chinese name of the 14-year conflict that merged into World War II. The victory saw the Japanese Empire ejected from Chinese territory and set the stage for the Red Army’s eventual victory in the civil war in 1949, which led to the founding of the People’s Republic of China.

The 70th anniversary of that event is October 1, and observers speculate the large J-20 formation was practice for those ceremonies, as the jet is anticipated to only operate in twos and threes under actual combat conditions.

​"To truly achieve peace, defending our homeland is not enough. We must not only defend but attack," Yang Wei, who designed the J-20 for Chengdu, says in the roughly four-minute video. The promotional also shows images of other PLAAF aircraft as the song "Me and My Motherland” plays on konghous and veterans comment on the country’s achievements, Xinhua noted.

Wang Ya'nan, chief editor of Aerospace Knowledge magazine, told the Global Times on Tuesday that "a considerable number of units are probably ready to fly the J-20.” The PLAAF has never disclosed how many of the jets it operates, but the South China Morning Post speculated that  Chengdu Aircraft Industry Group had built around 20 of the jets so far. The J-20 joined the PLAAF in 2017.

Song Zhongping, a Hong Kong-based military commentator, told the SCMP, “This video is to say that a number of mass-produced J-20s have entered service and are ready to do battle.”

As a fifth-generation stealth aircraft, the J-20 is roughly comparable to the Lockheed Martin F-22 and F-35 stealth aircraft, especially now that its upgraded engines have finally been ironed out. Like the F-35, a modified version of the J-20 is being considered for deployment on Chinese aircraft carriers, Sputnik reported. However, the naval version is in competition with the FC-31, another fifth-generation jet developed by Shenyang.

While the US has sold large numbers of F-35s to Japan and a smaller number to South Korea, the weapons sales most riling Beijing at the moment are 66 F-16V Viper jets Washington just agreed to sell to Taiwan, an autonomous island that China regards as a rebellious province. In Taipei, they will definitely not be celebrating on October 1, since the Taiwanese government is all that remains of the Republic of China defeated by the communists in 1949.