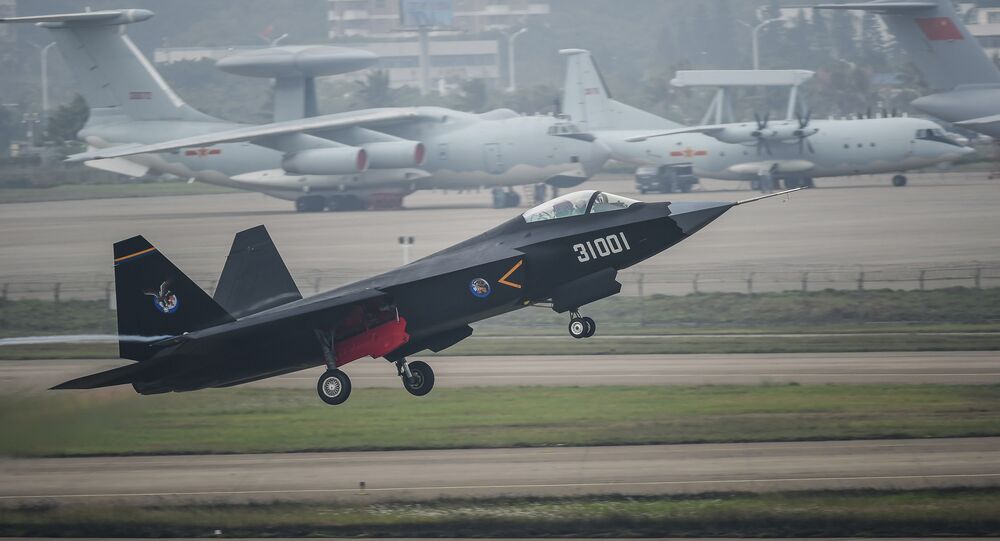 The Chinese People’s Liberation Army Navy (PLAN) has reportedly not yet decided whether to use the Shenyang FC-31 (also called the J-31) as its new carrier-borne stealth aircraft or to adopt a modified version of the Chengdu J-20, already in use by the country’s air force.

According to military insiders who spoke to the South China Morning Post (SCMP) anonymously, the jury is still out on which fifth-generation aircraft should be adopted for China’s burgeoning naval aviation sector.

"The navy has yet to decide which one they prefer, as both the J-20 and the FC-31 have their advantages and weaknesses," a source told the SCMP. Another told the paper that Chengdu Aerospace Corporation’s engineers were working on presenting a shorter version of the J-20 more suitable for carrier operations.

At present, the only fixed-wing aircraft used on China’s two carriers is the J-15, which Shenyang produced as a modified version of the T-10K-3, a prototype of what became Russia’s Sukhoi Su-33 that Beijing scooped up from Ukraine.

However, the J-15 is hardly the ideal aircraft for China’s carriers. The Liaoning and Type 001a both use a ski ramp on the bow of the ship to lift aircraft into the sky - something that ensures a safer takeoff but stipulates a more limited takeoff weight. Chinese media has derided the plane as a “flopping fish” for its limited usefulness, so with the J-15 already struggling under a heavy body weight and weak engines, that only limits its capabilities even further.

The upcoming Type 002 carrier, expected to first set sail in 2023, is anticipated to use catapults to launch aircraft, a launch method used only by US and French flattops. Beijing has also mulled installing the machines on the Liaoning in order to train Chinese pilots in anticipation of the Type 002, Sputnik reported.

However, the J-15 is a big plane: it’s a clumsy 24 meters long, roughly the same size as the largest plane to ever fly from a US carrier, the A-5 Vigilante bomber. That’s two meters longer than the J-20, a proven plane that entered service with the PLA in 2017.

"If the J-15 can be a ship-borne aircraft, why can't the smaller J-20?" Macau-based military expert Antony Wong Dong told the SCMP.

Still, the FC-31 is only 17 meters long, and while its engines aren’t as powerful as the J-20’s upgraded WS-15 “supercruising” turbofan engines, it’s got two of them - a distinct advantage for naval aircraft that might find themselves far from their mothership when encountering mechanical problems. The FC-31 would be able to limp home on its one remaining engine, but a J-20 in that situation would be up the proverbial creek.

​The PLAN has only recently come around to the FC-31, which until late last year wasn’t seen as much more than an experimental craft. The Diplomat reported in November 2018 that the FC-31 was back on the menu amid mounting pressure, on the one hand, to fill the hangars of Beijing’s new carriers, and on the other, to compete internationally with Washington’s F-35 Joint Strike Fighter, which maker Lockheed Martin has begun selling to over a dozen partners and the B and C versions of which can operate from carrier flight decks.

The Diplomat noted that part of the appeal of the FC-31 might come from marketing it to foreign buyers in a market presently monopolized by the pricey and unreliable F-35. However, the JF-17, which China developed jointly with Pakistan, seems to be filling that role as a reliable fourth-generation export. The JF-17 only costs between $25 and $32 million per plane, as compared to the F-35, which can set buyers back over $100 million per jet.

Fu Qianshao, an aircraft expert with the PLA Air Force, told China Daily in June 2017 that the FC-31 might cost $70 million per plane.