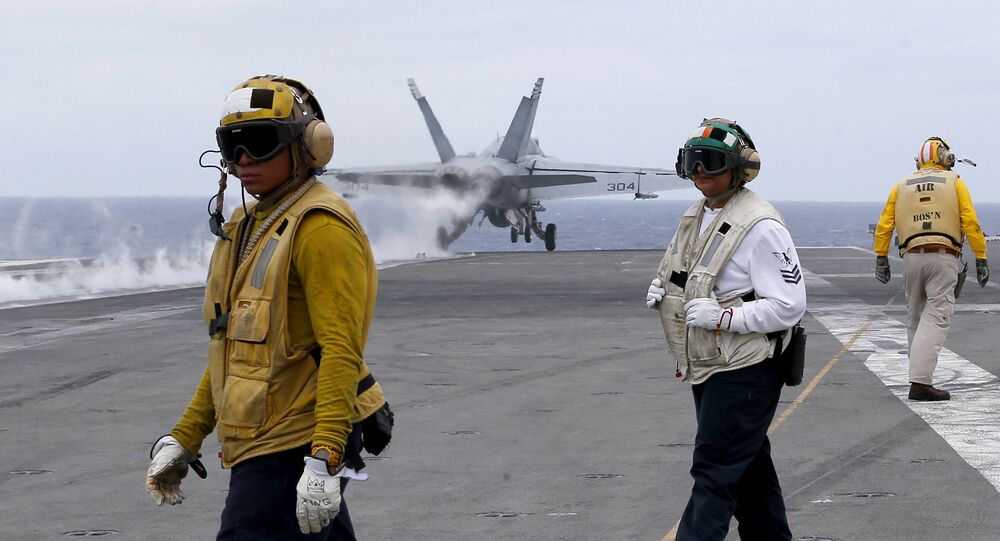 US Navy ships have repeatedly carried out so-called freedom of navigation missions in the South China Sea, where the majority of islands are controlled by Beijing. Other territories are claimed by countries, including Vietnam, Cambodia, Brunei and the Philippines.

The US aircraft carrier Ronald Reagan has sailed through the disputed South China Sea, a few days after Pentagon chief Mark Esper accused Beijing of destabilising the Indo-Pacific.

The developments followed US Defence Secretary Mark Esper warning on Sunday that “no one nation can or should dominate the Indo-Pacific” region, adding that Washington “stands firmly against a disturbing pattern of aggressive […] and destabilizing behaviour from China”.

Beijing has reportedly announced that its military would hold military exercises near the Paracel Islands in the South China Sea on Tuesday and Wednesday.

Beijing Warns Against US Legislation on South China Sea

Earlier this year, the US Senate reintroduced the South China Sea and East China Sea Sanctions Act that, if passed, would require the US government to seize US-based financial assets and revoke or deny visas to Chinese companies and individuals involved in the assertion of Beijing's legal claims to the South and East China Seas.

In late May, the Chinese Foreign Ministry said in a statement that China strongly opposes the reintroduction of the proposed legislation by the US Senate that would sanction anyone it deemed to be a threat to the stability of the South China Sea.

“Construction on Chinese territory in the South China Sea is a matter completely within our sovereignty. The [US Senate's act] runs counter to international law and basic norms governing international relations,” the Ministry said, urging the US to drop the act to preserve bilateral relations with Beijing.

Aside from Beijing, the Spratly Islands and Paracel Islands, which are among the more frequently disputed territories in the South China Sea, are also claimed by Taiwan, Vietnam, Indonesia, Malaysia, and the Philippines. Beijing has established de facto control over the Paracels since 1974.

The US, in turn, regularly sends its military vessels to the area to carry out the so-called “freedom of navigation” missions. Beijing sees these as provocative moves, and has urged Washington to stop the practice.