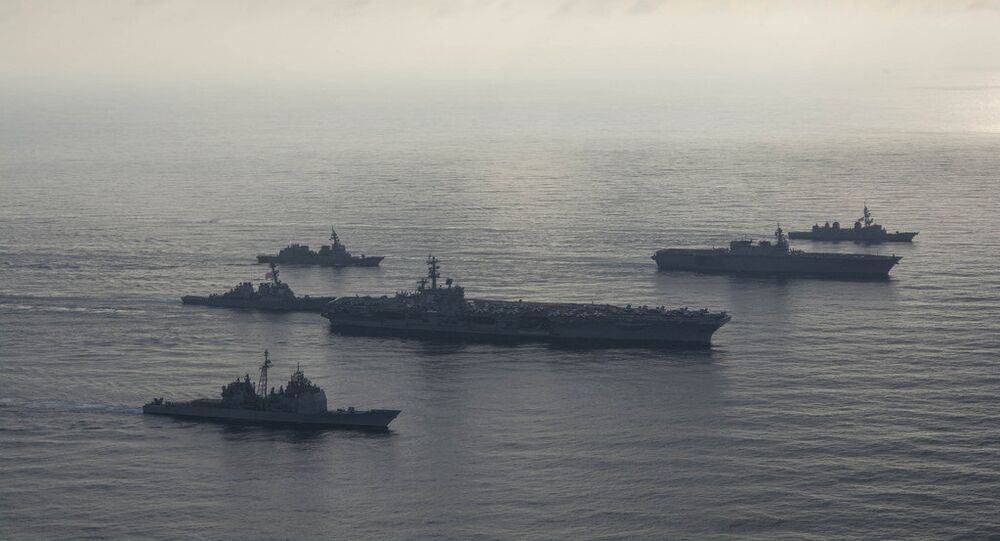 Just days after a US warship transited the Taiwan Strait and two sailed near the Spratly Islands, China’s Defense Ministry accused Washington of “stirring up trouble” in the region, denouncing the US’ freedom of navigation operations “as a pretext to conduct illegal and provocative moves.”

"China always respects the freedom of navigation and flights over the South China Sea in accordance with international law, but that should not be conducted in a wayward or illegal manner," Ministry of National Defense spokesperson Ren Guoqiang said at a press conference, Xinhua News Agency reported.

"China resolutely opposes any country taking such freedom as a pretext to conduct illegal and provocative moves in the South China Sea, undermining sovereignty and security of littoral countries, and doing harm to regional peace and stability," Ren said. "We demand that the US side earnestly respect the sovereignty and security of China, as well as the strong and common will of countries in the region to preserve peace and stability in the area, and stop making trouble in the South China Sea."

"The Chinese military will take resolute measures to safeguard national sovereignty and security, and to safeguard peace and stability in the region," the spokesperson continued.

Ren's comments come only days after the Arleigh Burke-class destroyer USS Stethem and the USNS Cesar Chavez, a Lewis and Clark-class dry cargo ship, passed through the Taiwan Strait, which separates mainland China from the self-governing island of Taiwan. Beijing claims Taiwan is a rebellious province that is a part of China, but Washington backs Taipei's bid to remain independent of the People's Republic, which Taipei claims is not the legitimate government of China.

Two weeks before, two US destroyers sailed near the Spratly Islands in the South China Sea, which Beijing also claims are its territory. Beijing claims the islands because they were surrendered to China by the Japanese Empire at the end of World War II, but other nations in southeast Asia do not recognize those claims — or any made by Beijing over islands in the waterway, especially those that overlap with their own. Vietnam, Brunei, Malaysia, the Philippines and Taiwan also claim parts of the waterway, through which trillions of dollars in trade pass each year and underneath which are believed to lay substantial hydrocarbon reserves.

The US doesn't recognize these claims either, saying the waters around islands like the Spratlys are international waters. By sailing through the waters and brazenly ignoring Chinese claims — and threats when the US ships get too close — the US Navy and its allies conduct "freedom of navigation operations" (FONOPS) to demonstrate Washington's contempt for Beijing's claims.

"We strongly call on the US party to immediately stop these provocative actions… The Chinese party will take all necessary measures to resolutely defend its sovereignty and security as well as the stability in the South China Sea," Chinese Foreign Ministry spokeswoman Hua Chunying said on February 11, noting that China has "indisputable sovereignty" over the Spratlys.

Ren said that China was sorting out its problems in the South China Sea with ASEAN (Association of Southeast Asian Nations) members independent of the US' "disregard for international laws and rules" there. China and Taiwan aren't members of ASEAN, but every other claimant to South China Sea territory is, and they cooperate with the ASEAN community closely.

Prior to ASEAN's 33rd summit last November, Chinese Premier Li Keqiang said he hoped a rules-based code of conduct "will be finished in three years' time so that it will contribute to enduring peace and stability in the South China Sea. We are not and we will not seek hegemony or expansion. That is something that we will never do."

Indeed, earlier this month the head of US Naval Operations said essentially the same thing. Chief of US Naval Operations Admiral John Richardson told the Atlantic Council foreign policy think tank on February 7 that interactions with Chinese ships in the waterway often took place is a "gray zone" between open hostility and peaceful coexistence.

"[T]he Chinese navy is growing; there's going to be more opportunities where we meet," Richardson said, noting that "we do have an operational construct that is designed to minimize the chance of miscalculation when two of our ships meet on the high seas… So let's not be obstructing one another, driving our ships in front of one another, throwing obstacles in front of the ship. Let's just be biased towards making it easy."

Perhaps the extreme example of China's growing impatience with FONOPS was made by Dai Xu, president of the Institute of Marine Safety and Cooperation, as well as a colonel commandant in China's air force, at the Global Times' annual conference in Beijing last December.

"If the US warships break into Chinese waters again, I suggest that two warships should be sent: one to stop it, and another one to ram it," he said, Sputnik reported. "In our territorial waters, we won't allow US warships to create disturbance."

Dai was certainly prompted by an incident in September of 2018 when a Chinese destroyer intercepted a US destroyer engaging in FONOPS, coming only a couple of dozen meters from the ship at their closest.

Other US Navy actions this year have included sailing a destroyer and an oiler through the Taiwan Strait on January 24 and joint drills in the South China Sea with Britain's Royal Navy just a week prior.

The French Defense Ministry indicated last week that when its Charles de Gaulle aircraft carrier deploys to the Indian Ocean later this year, it will also engage in FONOPS, as did London when its new aircraft carrier HMS Queen Elizabeth heads there in 2020 or 2021.