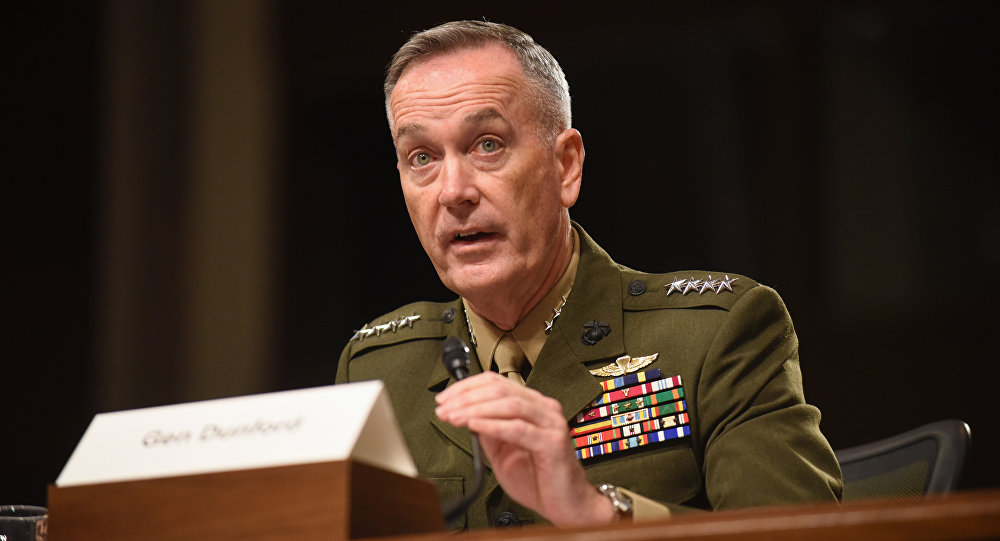 The US military's top general said Wednesday that Chinese President Xi Jinping reneged on promises not to militarize the South China Sea and called for "collective action" to hold Beijing responsible.

General Joseph Dunford, chairman of the Pentagon's Joint Chiefs of Staff, said that there was a need to enforce international law, yet noted he was not calling for military action.

"The fall of 2016, President Xi Jinping promised President Obama that they would not militarize the islands. So what we see today are 10,000-foot runways, ammunition storage facilities, routine deployment of missile defence capabilities, aviation capabilities, and so forth," he said in a talk on US security and defence at the Brooking Institution, noting that China “walked away from that commitment."

© CC0
Australian Navy Pilots Hit by Lasers During South China Sea Drills - Reports
The general claimed that “the rule of law, international laws, norms and standards” are at stake in the South China Sea dispute as much as in any territorial dispute in the world, and ignoring China’s actions that are as he says not in compliance with international rules, norms and standards would lead to setting a new standard.

"I'm not suggesting a military response. What needs to happen… is coherent collective action to those who violate international norms and standards. They need to be held accountable in some way so that future violations are deterred," Dunford said.

The South China Sea is a major transit route which is also rich in fishing stocks. The territory is a hotspot of disagreement between China and a number of other regional countries — Japan, Vietnam, and the Philippines. The US has sent navy vessels through the areas claimed by China as "international freedom of navigation operations," yet otherwise has found responding difficult.