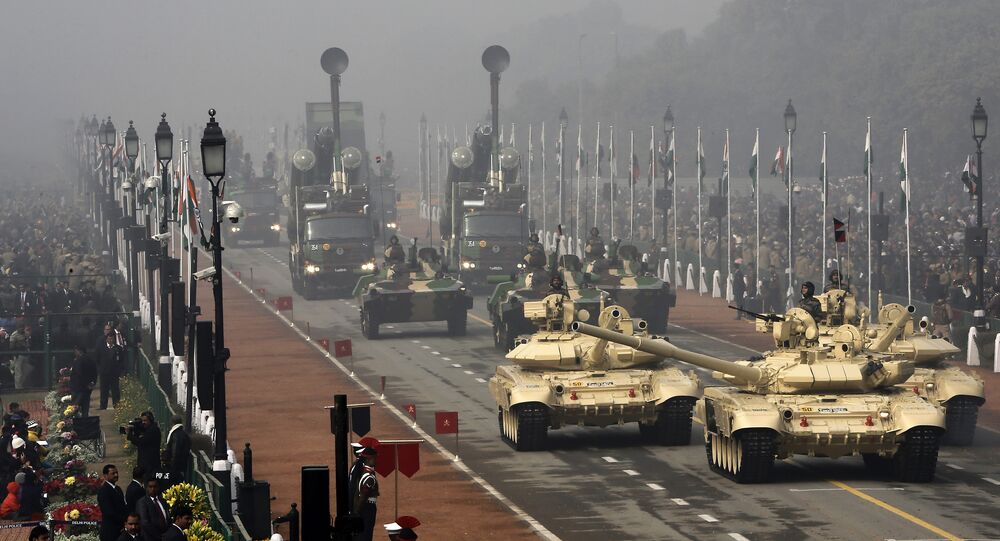 Described as one of the most lethal MBTs in the world, the T-90S is vaunted for its mobility, lethal firepower, and first hit ability during engagements.

The tanks will equip 10 armoured regiments of the Army and be inducted in the 2022-2026 timeframe.

The 46.5-ton main battle tank (MBT) powered by a 1,000 HP engine is likely to deployed along the Pakistani border. The first 64 tanks should be delivered in 30-41 months.

© AFP 2021 / Money SHARMA
India MoD Urges Russia to Boost Local Production of T-90MS Tanks Before Purchase
Sputnik reported last month that India's Cabinet Committee on Security had given clearance to the purchase of an additional 464 T-90s at a cost of around $1.93 billion. The tanks will be assembled at the Heavy Vehicles Factory (HVF) in Avadi area in Tamil Nadu's capital city of Chennai from semi-knocked-down (SKD) kits from Uralvagonzavod — the Russian tank manufacturer.

Sources told Sputnik that the proposal to assemble the tanks from SKD kits was taken as the Indian facility was not producing the T-90S at the desired pace. The HVF had in 2006-07 signed a contract to produce 1,000 T-90S tanks under licence from Russia by 2020. But the HVF has been able to supply only 350-400 T-90S to date.

The T-90S tank is equipped with a 125mm smoothbore gun stabilised in elevation and azimuth that is capable of firing all types of ammunition, including laser-guided missiles (Invar) to a range of 5km. The gun has an automatic loader ensuring a high rate of fire. The tanks additionally have a 12.7mm anti-craft machine gun and 7.62mm co-axial machine gun supported with high accuracy sighting systems. Capable of night fighting, the tank is equipped with night vision devices and a thermal imaging system. It is also protected by explosive reactive armour (ERA).