MOSCOW (Sputnik) – North Korea’s official news agency KCNA said in its report about the recent summit between the country’s leader Kim Jong-un and US President Donald Trump that Kim had expressed readiness for the next meeting with the US president.

The agency noted that Kim had also expressed his gratitude to Trump for the US president’s efforts during their successful talks and for the long journey he had made to Vietnam's capital Hanoi, where the summit had been held.

The outlet noted that the two leaders’ appreciation of their talks, both in the one-on-one and extended formats, and emphasized that significant progress had been made in the implementation of their commitment to denuclearize the Korean Peninsula, expressed at their first summit in Singapore last June.

Moreover, the material noted the constructive discussions held by the two leaders and the opening of a new era in US-North Korean relations. 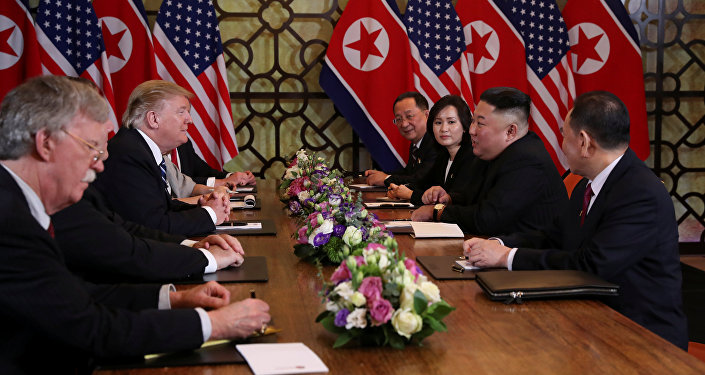 © REUTERS / Leah Millis
Analyst on Trump-Kim Summit: They Try to Do Too Much in Too Short Period of Time
Notably, the article made a mention of the existing confrontation between the United States and North Korea due to their decades-long hostility. However, it noted that Kim and Trump had appreciated the summit in Hanoi as an opportunity to deepen their mutual trust and had agreed to maintain dialogue on denuclearization.

The summit between Trump and Kim was held in Hanoi on Wednesday and Thursday. The meeting finished abruptly several hours before schedule without any agreement or declaration.

After the talks, North Korean Foreign Minister Ri Yong Ho said his country had asked for partial US sanctions relief, which he called a "realistic" offer. Trump, in his turn, told reporters he had to walk away after Kim asked for a full sanctions removal upfront.

Like a Shadow: WATCH Kim Jong-un's Sister Creep Behind Kim and Trump

NO DEAL! Trump and Kim Fail to Reach an Agreement in Hanoi

Trump-Kim Summit a Setback For Leaders, But ‘Big Loss For The People of Korea'