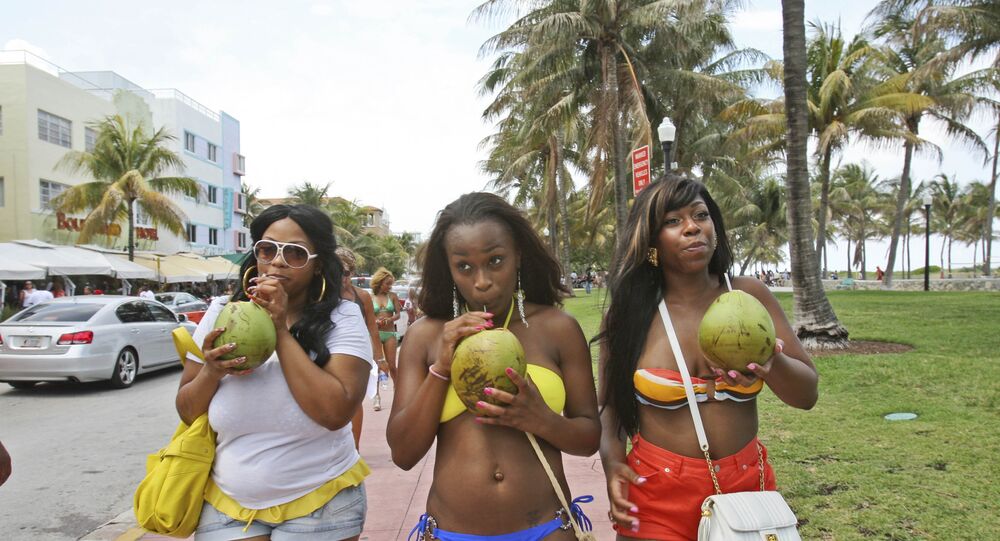 The Hainan-based Coconut Palm Group’s ad, picturing voluptuous girls holding cans with the slogan “I drink from small to big”, has prompted public outrage on Chinese social media. The producer cancelled the commercial and replaced it with a call for women’s empowerment.

The Hainan Coconut Palm Group has admitted that their canned coconut drink has no breast-enlargement effect following a wave of online criticism of their controversial advertisement, instead claiming that their beverage makes curves bigger.

The clip, which featured several curvy women fooling around in water and holding cans in their hands, also had slogans reading “drink one can every day, [your] curves will excite people, whiter and plumper”, “I drink from small to big” and “drinking more coconut milk every day can make [your] breasts fuller”, the South China Morning Post reports.

According to the outlet, the misleading commercial triggered uproar on the Chinese social network Weibo and prompted the district’s Industrial and Commercial Bureau in Hainan to launch an investigation. In response to the backlash, the drink producer not only backed out of their key message in the commercial, but also released a new clip on their website with what could be described as a feminist angle.

The creators illustrated the controversial “from small to big” slogan with visuals showing a schoolgirl, a teenager and a female student, voicing their commitment to the coconut drink. The call “white, tender and plump” was changed to “white and tender”, with a clearer reference to the coconut.

This is not the first time that the Hainan-based manufacturer has come under fire for an ad promising that their drink brings something more than just refreshment. The South China Morning Post recalls that in 2017, the company landed in hot water for a commercial for their papaya juice with a similar jingle: “when I’m full of papaya I’m ample-chested”.