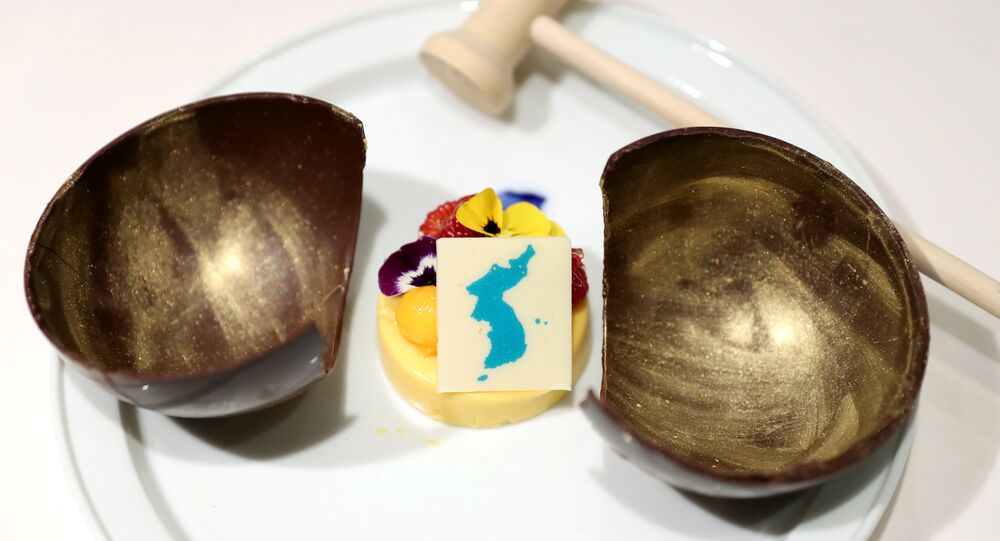 Japan's Foreign Ministry had already demanded the removal a menu item before the dinner but the request was reportedly ignored by South Korea.

A second protest with the South Korean government over a menu item that was served at the inter-Korean summit dinner has been lodged by Japan's Foreign Ministry.

The dessert served at the meeting of Moon Jae-in and Kim Jong-un was made of mango mousse with a plate of white chocolate with a map of the Korean Peninsula along with the Takeshima Islands in the Sea of Japan on the surface. In addition to that, there was the same map depicted on the backs of the North and South Korean counterparts' seats during the negotiations.

"We are extremely disappointed because the islands of Takeshima are the original territory of Japan. This is unacceptable," Director of the Asia and Oceania department of the Japanese Foreign Ministry Kenji Kanasugi said.

© AP Photo / Ahn Young-joon
Seoul Tells US About Will to Fulfill Denuclearization Goal After Summit
Japan made the same kind of protest in February when the Korean unification flag with the Takeshima Islands on it was raised at a friendly match ahead of the PyeongChang Olympic games.

The islands, which are controlled by South Korea at the present moment, have been claimed by Japan for several years. The Japanese government keeps insisting that the islands are an inherent part of Japan's territory, saying that South Korea had obtained them illegally.