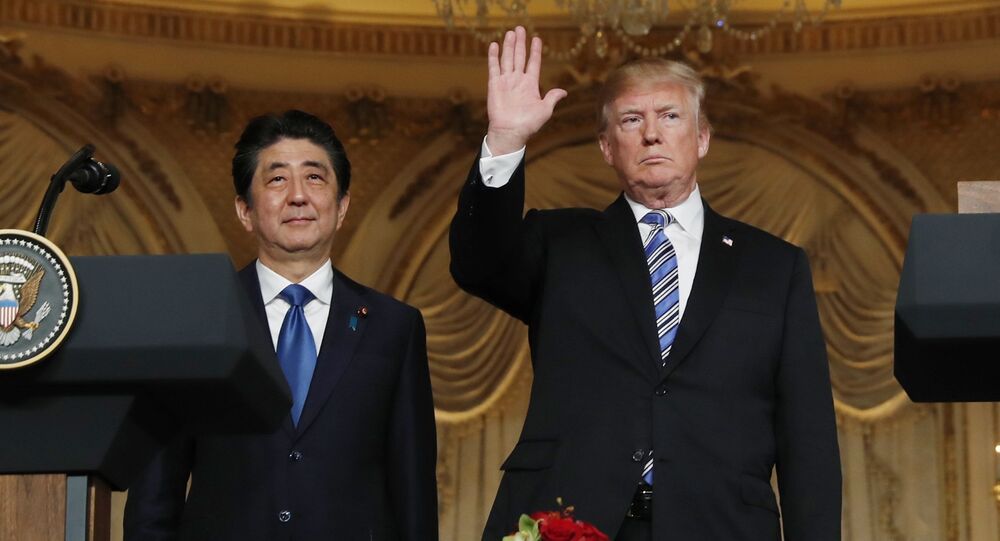 TOKYO (Sputnik) - Japan and the United States consider the inter-Korean summit to be a step toward achieving peace and stability in the North-East Asian region, but will continue to monitor Pyongyang's actions, Japanese Prime Minister Shinzo Abe said Sunday.

"We agreed that the summit is a positive step toward achieving the resolution of various issues related to North Korea, including denuclearization, and should be regarded as a historic step toward peace and stability in North-East Asia," Abe said at a press conference following a telephone conversation with US President Donald Trump.

At the same time, he said Tokyo and Washington intended to "closely monitor the trends in activities" of North Korea.

In addition, Japan’s prime minister noted that the issue of the Japanese citizens kidnapped by the North Korean intelligence services had also been discussed at the recent inter-Korean summit.

“Mr. Moon said that during the talks with Chairman Kim Jong Un, the issue of the Japan-North Korean relations has been raised as well as the problem of the abducted Japanese citizens, while the sides have also discussed Japan’s vision,” Abe told reporters following the phone talk with Moon, as quoted by the NHK broadcaster.

Abe went on expressing gratitude to the South Korean president for fulfilling the agreements on the settlement of issues between Tokyo and Pyongyang.

© AP Photo / Andrew Harnik
North Korea's Kim Ready to Lay Out Map for Denuclearization of Korean Peninsula - Pompeo
On Friday, Kim and Moon held a historic summit in the truce village of Panmunjom. The two leaders signed a joint declaration, agreeing to take measures to support international efforts aimed at denuclearization of the Korean Peninsula and proceed with reunion programs for the separated Korean families.

In 2002, North Korea admitted that in a period between the 1970s and the 1980s it kidnapped 13 Japanese citizens to train them as spies, while Tokyo officially identified 17 people as having been abducted. In 2002, five of them returned to Japan, however Tokyo insists on a thorough investigation and finding the rest of the missing Japanese nationals.