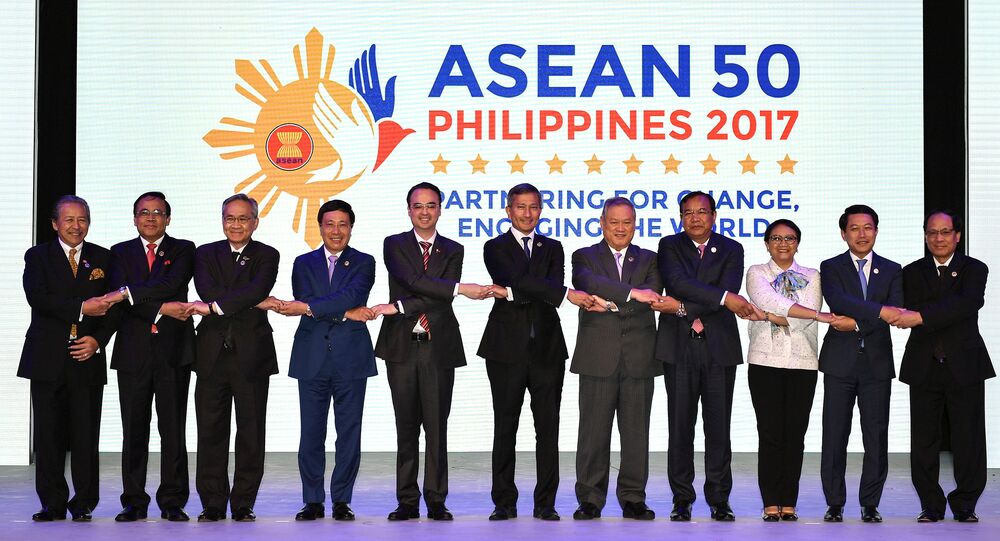 India's "Act East" policy, originally conceived as an economic initiative, has taken on political, strategic, cultural dimensions including the establishment of institutional mechanisms for dialogue and cooperation. It is also one of New Delhi's many endeavors aimed at countering Beijing's influence in the region.

New Delhi (Sputnik) — Ahead of the India-ASEAN (Association of Southeast Asian Nations), commemorative summit to be held in New Delhi on January 25 and the subsequent participation of ASEAN leaders as chief guests in India's Republic Day celebration on January 26, the Indian external affairs Minister Sushma Swaraj is visiting three key nations of the ASEAN bloc from January 4 to 8.

© AFP 2020 / HOANG DINH NAM
India Seeks to Strengthen Relations With ASEAN Bloc to Counter China
Swaraj's tour of Thailand, Indonesia, and Singapore — the founding members of ASEAN is being seen as India's attempt to lend vigor to its Act East policy which focuses on the extended neighborhood in the Asia-Pacific region.

During the first leg of this visit, the external affairs minister will be in Thailand on January 4-5. India-Thailand defense cooperation will be high on agenda.

"All aspects of bilateral relations with Thailand will be discussed with particular focus on political, defense and economic ties and on further enhancing India's engagement with ASEAN countries," Ministry of External Affairs said in a statement.

Thailand will assume the role of coordinator country for India-ASEAN relations in the middle of 2018.

The Indian foreign minister will be Indonesia on January 5-6 where she will co-chair the 5th meeting of the India-Indonesia Joint Commission with her Indonesian counterpart Retno Marsudi. Both the ministers will also inaugurate the second meeting of ASEAN-India Network of Think Tanks.

"As the biggest country in the ASEAN region with the largest economy, Indonesia is an important partner for India including in trade and strategic matters. In recent times, there has been intensive engagement between the two countries bilaterally, as well as plurilaterally. The Joint Commission meeting and other engagement of the external affairs minister will enable the two countries to chart out the course of the partnership during the year 2018," the external affairs ministry statement said.

During the visit, Sushma Swaraj will also meet the President of Indonesia and have other official engagements, including interacting with representatives of the Indian community. She will also meet the new Secretary General of ASEAN Lim Jock Hoi.

© REUTERS / Altaf Hussain
India, Thailand Pledge to Tackle Terror, Build Highway to Link Countries
Thereafter, Swaraj will travel on to Singapore where she will stay up to January 8. The Indian foreign minister will inaugurate the Regional Pravasi Bharatiya Divas (Non-resident Indian Day) of ASEAN countries on the 7th of January. It will be India's endeavor to reach out to ASEAN countries through this forum as delegates from all the ASEAN countries, including ministers, eminent personalities, business and socio-political leader shall be in attendance.
...
Reddit
Google+
Blogger
Pinterest
StumbleUpon
Telegram
WhatsApp
106