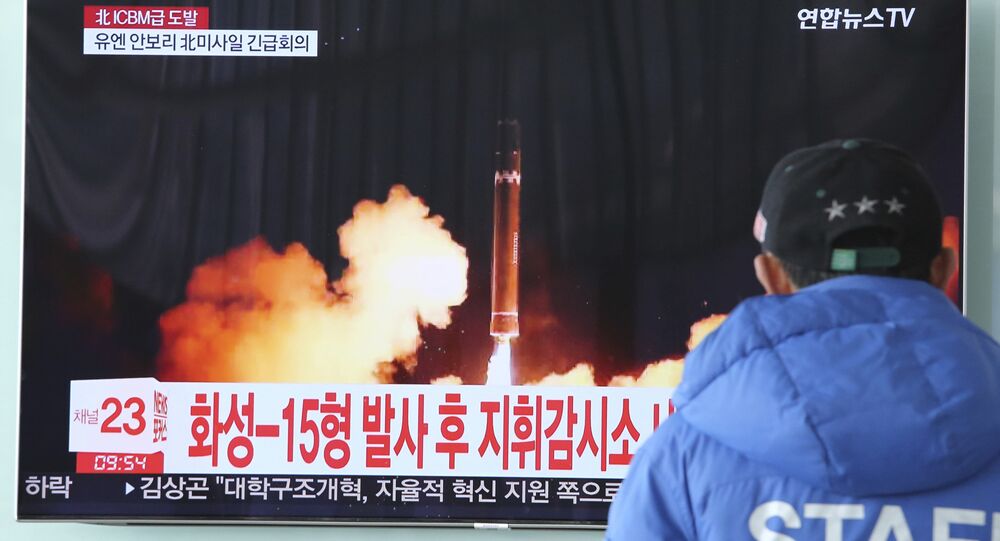 If this information is ultimately verified, the repercussions will most likely make what is already a tense situation on the Korean Peninsula even more volatile.

Preparations for the launch of a ballistic missile capable of re-entering the Earth's atmosphere are under way in North Korea, Japan's Asahi Shimbun reported.

The newspaper cited a defector familiar with Pyongyang's missile development program as saying that during a meeting of senior North Korean officials on December 11, the country's leader Kim Jong-un allegedly ordered the launch of the new intercontinental ballistic missile (ICBM) has for September 9, 2018.

The date marks the 70th anniversary of the founding of North Korea by Kim Il-sung, grandfather of the country's current leader.

© AP Photo / Wong Maye-E
In this Feb. 15, 2016 file photo, a visitor at a flower festival walks past a model of North Korea's newest satellite Kwangmyongsong 4 on display

As far as the new ICBM is concerned, the Unha-4 will be a larger version of the 30-meter Unha-3 missile, which in turn is an upgraded version of the long-range Taepodong-2 ballistic missile, according to Asahi Shimbun.

The defector claimed that North Korea plans to launch a satellite to check whether the Unha-4 missile will be able to re-enter the atmosphere.

Intelligence sources have meanwhile said that there were no specific signs that Pyongyang is preparing a new ballistic missile launch.

In late November, North Korea launched the Hwasong-15 ballistic missile, which had a range of more than 13,000 kilometers. US Defense Secretary James Mattis said at the time that the missile set a new record for altitude reached in space by a North Korean ICBM.