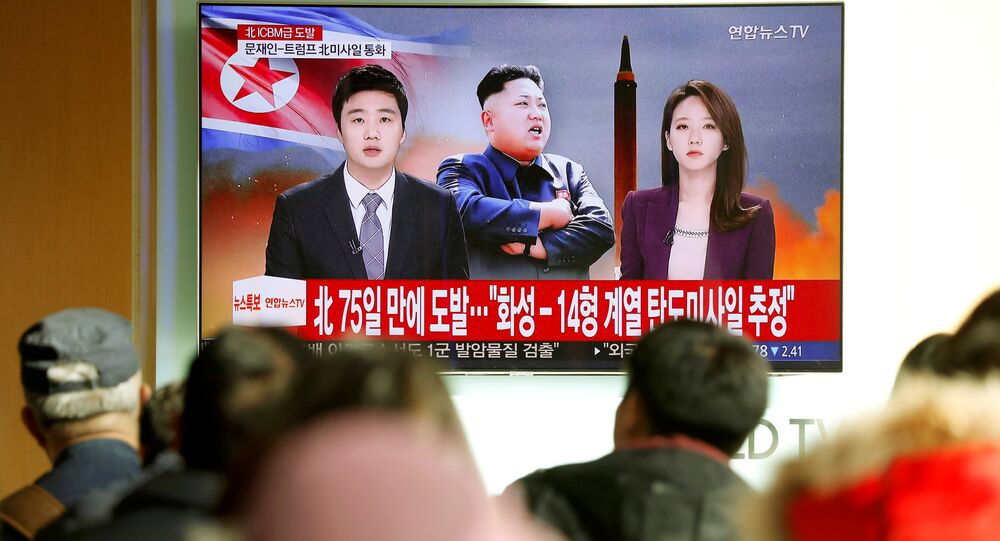 Russian Foreign Minister has shared his view on the possible reasons for the latest North Korean missile launch and commented on the situation on the peninsula.

MINSK (Sputnik) – Russia condemns the provocative actions of the United States with regard to North Korea, as well as Washington's attempts to involve Tokyo and Seoul in provocations, Foreign Minister Sergei Lavrov has stated, adding that Japan and South Korea "will become the first victims in case of the outbreak of a war on the Korean peninsula."

According to the minister, Pyongyang has refrained from launching missiles for over two months prior to the latest launch on Wednesday.

Lavrov explained that the US officials made it clear to Russia that next US drills close to the North Korean borders were not scheduled to take place until spring 2018.

"We have been working with Pyongyang. Then, all of a sudden two weeks after the United States had sent us the signal [about readiness to dialogue], they announced unscheduled drills in December. There is an impression that they were deliberately provoking [North Korean leader] Kim Jong Un to make him break the pause and gave in to their provocations," Lavrov said.

The foreign minister, however, stressed that Russia fully complied with the sanctions regime imposed by UN Security Council against North Korea.

Lavrov's statement comes amid the arrival of American fighter jets ahead of the joint US-South Korean drills that are set to kick off on December 4, a move repeatedly slammed by Pyongyang as provocative.

© REUTERS / KCNA
Little Party Never Killed Nobody: North Korea Celebrates Latest Missile Launch (PHOTO)
The deployment comes days after Pyongyang launched Hwasong-15 intercontinental ballistic missile reportedly capable of covering 13,000 kilometers (8,077 miles) on Wednesday. The flight of the missile that reached an altitude of 4,475 kilometers lasted for 53 minutes, after which the missile fell into the Sea of Japan, within the Japanese exclusive economic zone.