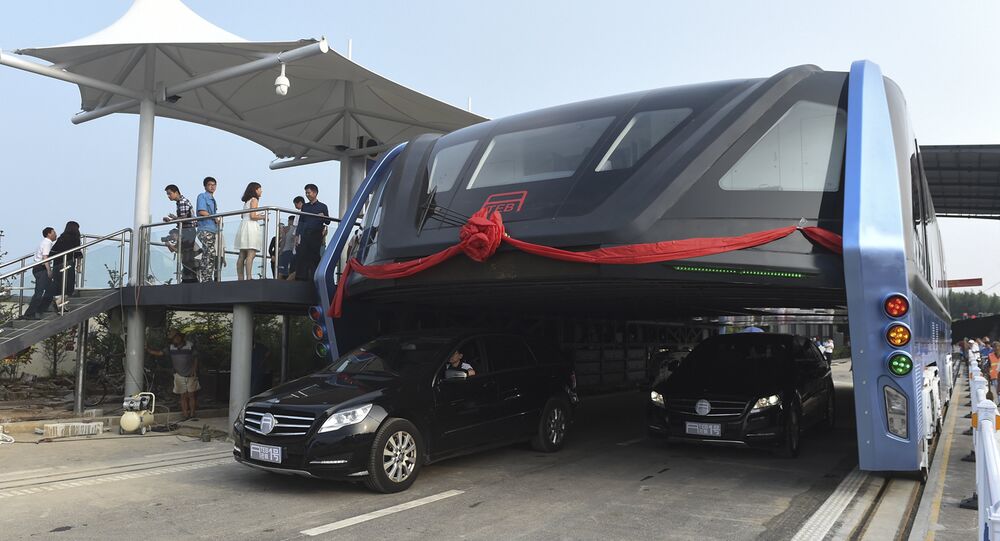 China’s Futuristic Elevated Bus Scrapped, Accused of Being a Scam

A video uploaded online in August 2016 depicted the test drive of an “elevated bus” that cars could easily drive underneath. The video prompted awe and controversy – but now it seems the experimental bus project has come to a crashing halt.

The Transit Elevated Bus (TEB), a futuristic vehicle that had a passenger carriage about 15 feet off the ground and space for cars to drive two-by-two through, was tested in Hebei. The test video went viral online due to the unusual look and futuristic potential of such a vehicle.

The heavily hyped vehicle was being made under contract with the Chinese government. However, after almost no progress was made following the 2016 tests, Beijing opted to not renew their contract with developer Huaying Kailai. As a result, the project is being scrapped.

The test site is now being dismantled while the vehicle itself has been retired to a nearby parking lot. The monstrous bus is just sitting in the lot, causing locals to complain that it has blocked traffic. The developer, meanwhile, has been accused of misleading investors and backers with reports of its progress.

The Global Times, a Chinese state-run publication, slammed the project as never having gone past the conceptual stage, and not accounting for actual challenges such as navigating turns.

"It can only run on wide and straight roads," said transportation professor with Tongji University Sun Zhang to the South China Morning Post. "In big cities where roads are winding and jammed [with traffic], such roads are in short supply."

TEB designer Song Youzhou defended his design. "We haven't done anything wrong at all," he told Sixth Tone. "The latest tests show that the bus design is entirely possible."

The Global Times also criticized Huaying Kailai for its funding strategy via peer-to-peer (P2P) investment platforms, online clients that match lenders to borrowers. While P2P offers high rates of returns, it also attracts borrowers who cannot qualify for conventional loans. According to the Global Times, the company spent only 200 million yuan ($29.3 million) of the billions raised via P2P, leading to accusations that the entire project was a scam.

In congested Chinese cities, the notion of public transportation that glided over traffic on rails seemed like the way of the future. But those who were excited over such a technology will seemingly be waiting for this bus for a long, long time.

Vintage Cars on a Peace Rally From Monaco to St. Petersburg