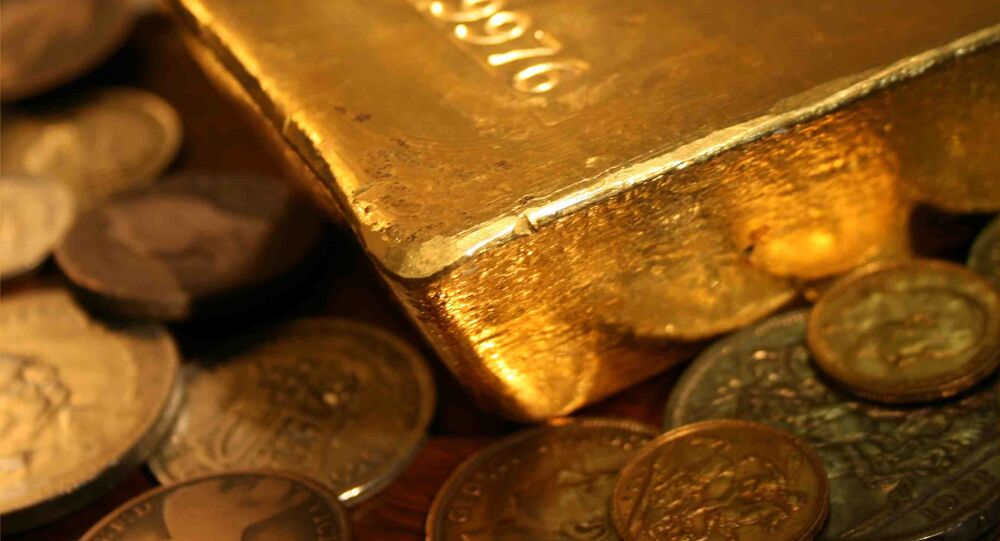 China is boosting its influence in global gold markets by establishing its largest gold-investment fund led by Shanghai Gold Exchange (SGE), which is expected to raise about 100 billion yuan ($16.1 billion).

© Sputnik / Vitaliy Bezrukih
Americans Fear Beijing, Moscow May Introduce New Gold Standard
The initiative is a part of China's ambitious New Silk Road project and about 60 countries have already invested in the "Silk Road Gold Fund." While the new fund is aiming to invest in mining projects in the region, it is expected that central banks of the member states will increase their holdings in the precious metal.

Citing state-run Shanghai Securities Journal, Asia markets expert Laura He underscores that in addition to buying stakes in gold-mining projects and companies along the New Silk Road, the gold fund will be also aimed at investing in gold-mine stocks and establishing gold exchange-traded funds.

"The fund may also boost China's power over the world gold market and could increase the use of the yuan in pricing gold," Laura He noted, quoting Chinese economist Song Qinghui.

According to Laura He, the major stakeholders of the fund are Shaanxi Gold Group and Shandong Gold Group (with a combined 60 percent stake), Shanghai-listed Industrial Bank Co. and Sichuan Western Resources Holding Co. (each holding 15 percent).

© CC BY 2.0 / Bullion Vault / gold bar on coins
Dragon Rising: China's Gold Will Break World's Dependence on US Dollar
Some experts suggest that the ultimate goal of Beijing is to create a viable alternative to London's global gold trading center with a prospect of establishing the world's largest gold trading hub in China.

Indeed, Asia's gold demand is growing rapidly, accounting for more than 70 percent of the global total. Today China is the world's largest gold producer, and both major importer and consumer of the precious metal.

Predictably, Asia's "golden rush" raises concerns in the West, prompting Western mass media to speculate that Beijing may soon introduce a new gold standard to displace the dollar. Furthermore, China may introduce its gold fixing reference price in yuan before the end of this year, reports say.

Meanwhile, the International Monetary Fund (IMF) has recently admitted that the Chinese currency is "no longer undervalued," actually opening doors for the yuan to global currency market.

In the light of Beijing's latest move, the dollar proponents' concerns are looking far from being "groundless."