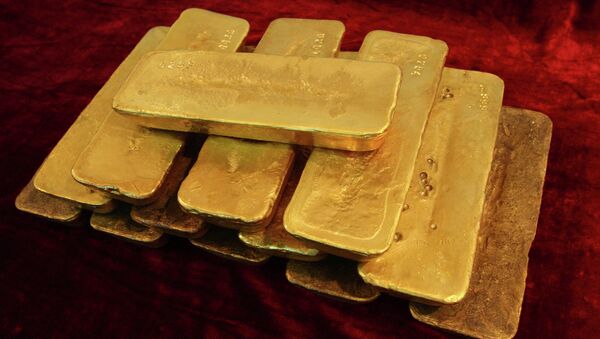 The competition for London gold-market has grown after the Chinese Shanghai Gold Exchange (SGE) established an International Chamber of Commerce in the free trade zone of the city, providing for free capital flows, Deutsche Wirtschafts Nachrichten reported.

“The central government is gradually opening up the gold market by allowing more participants to trade,” Bloomberg cited a senior gold analyst at Industrial Bank Co. in Shanghai, Jiang Shu.

China is the world's largest gold producer and is, logically, interested in the possibility to influence the determination of the gold price.

China to Allocate $50Bln to Brazil for Infrastructure Projects - Deputy FM
According to a market participant, China will have its fixing price before the end of the year, with the country experiencing a rapid development of its gold market, Financial Times reported.

Chinese mining companies and refineries which store their assets abroad are expected to transfer their amounts of precious metals back to China.

In March, the government in Beijing had largely lifted restrictions on the import and export of gold to facilitate precious metals trading among domestic dealers.

The move raised concerns in the United States. In recent years, China has purchased a lot of gold contrary to the international trend and the US fears that Beijing and Moscow could work together to introduce a new gold standard, the article said.