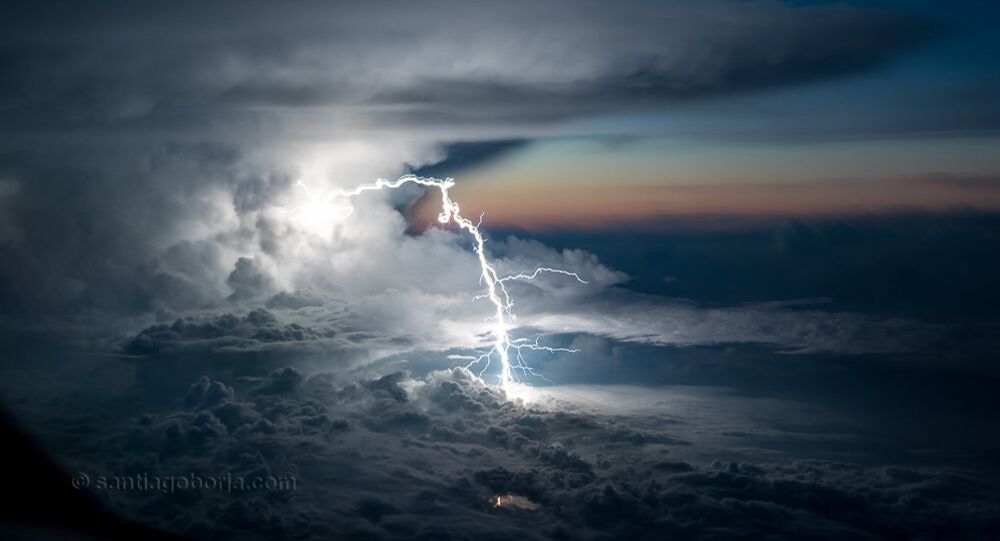 Santiago Borja is an airline pilot who braves each storm he encounters with a camera in his hands. His incredible “Storm Portraits” series, photographed from around 37,000 feet above the ground, allows you to see thunderstorms in all their glory.

Regina Konstantinova — A thunderstorm is one of the most spectacular (and terrifying) of Mother Nature's performances. Santiago Borja, a pilot and a photographer based in Quito, Ecuador, is lucky to have a front-seat view from the cockpit to enjoy the show.

"I've been into aerial storm photography for the past four years, taking advantage of the long haul routes I fly from America to Europe," Borja told Sputnik.

Santiago Borja
Storm Portraits
Traveling around the world both on duty and on vacation, he developed a strong passion for storms. "Storms are my favorite scenario and lightning is my best subject," he noted.
Santiago Borja
Storm Portraits
Obviously, the pilot-photographer, who had been flying a Boeing 767 for over six years, doesn't try to do two things at a time. He is a conscious pilot who doesn't snap images while operating the plane during the storm. All his photos have been taken while off-duty.

"I only take these photos while off-duty during long-haul flights. This means that in flights longer than 10 hours we take turns at the controls, so when other pilots are flying, I sit in the observer's seat and do my photography without any trouble or distractions," he explained.

In Borja's electrifying shots, the darkness and the light create a powerful union. In 2016, one of his works featured in National Geographic's Nature Photographer of the Year contest, where he won third place in the "Landscape" category.

Santiago Borja
Storm Portraits
Borja only keeps the storm portraits that he considers to be good enough — there are about 50 of them. "My personal favorites are those that take you into the scene, where you feel you're part of the moment," he said.

Santiago Borja
Storm Portraits
"Most of the times I cannot take photos because I'm flying or I miss the great lightning of the storms. I usually take many photos and only one or two are usable, and even less often a photo is good enough to keep," the pilot cum photographer said.
1 / 7
Santiago Borja
Storm Portraits
Though he believes that technique is very important in taking such photos, he admits that luck definitely plays a big role in the process. "You never know when lightning is going to happen and it's so fast that you cannot try to capture it once it's already started," he added.
...
Reddit
Google+
Blogger
Pinterest
StumbleUpon
Telegram
WhatsApp
170