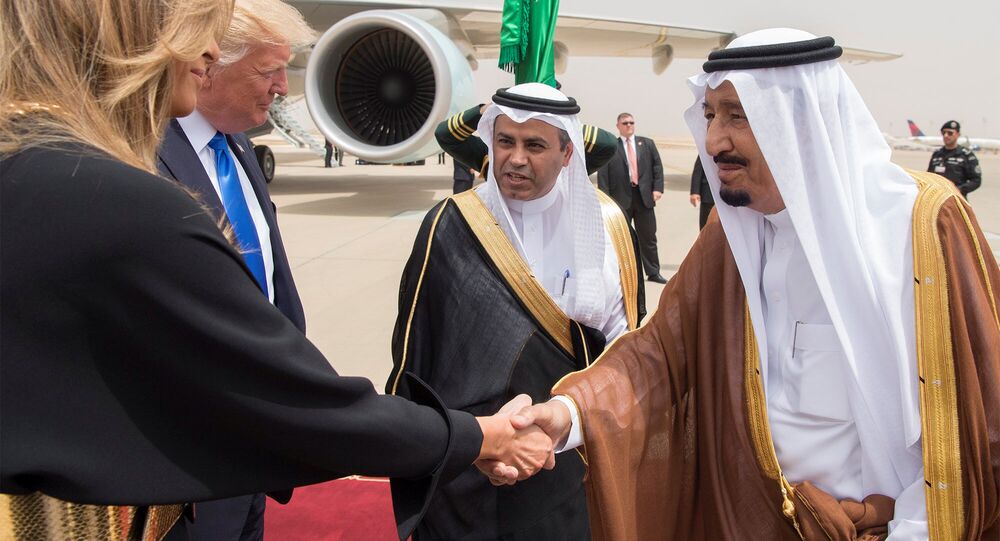 Saudi King Salman bin Abdul Aziz drew a lot of attention as he shook hands with US President Donald Trump's wife Melania during the couple's controversial visit to the Middle East. Afterwards, he was given a lecture on Islamic ethics by Swedish Muslims.

© AP Photo / Ebrahim Noroozi
Feminist Sweden Puts on Hijab in Hope of Doing More Business With Iran
Sweden's growing Muslim diaspora seemed to be mortified by the fact that the Saudi King shook hands with a woman during US President Donald Trump's state visit the past weekend. In most versions of Islam, shaking hands with (or even touching) a member of the opposite sex is prohibited when not related.

The fiercest criticism was expressed by the freshly-launched Instagram account Islamiskt ("Islamic"). The account was started at the end of April, followed by a Facebook page by the same name, Swedish news portal Fria Tider reported.

"In God's name, you shake hands like this? I hope not," Islamiskt wrote and went on to enlighten fellow Muslims about the peculiarities of Islam. "Shaking hands with the opposite sex is strictly haram [forbidden] and is something the holy prophet not only never did, but also forbade the believers to do," Islamic wrote.

The text continued with an explanation why it was of paramount importance for Muslims not to shake hands with any member of the opposite sex.

"Keep it in mind that by not shaking hands you show it to the others and even to yourself who you are. This is part of your identity, do not forget it," the text said.

At present, it remains unclear who runs the account, but suspicions were voiced that it could be possibly linked to an activist group that previously protested the fact that a hijab-wearing Muslim woman was denied employment by the Nordic airline SAS. Earlier this year, Aye Alhassani's failed, yet much-debated attempt to get a job with SAS wearing an Islamic veil was claimed to be a publicity stunt with Islamic undertones by blogger Rebecca Weidmo Uvell, which was vehemently denied by Aye Alhassani.

In Sweden, Muslim ethics often clash with its perennial drive for multiculturalism, yielding unexpected results. In 2016, a Muslim woman stepped down from her job as a teacher after being told that shaking hands with her male colleagues was expected. The same year, similar cases involved a Muslim member of Helsingborg City Council and a Muslim border inspector. The most high-profile case, however, involved former senior Green Party member Yasri Khan, who resigned in acrimony after refusing to shake a female reporter's hand during an interview.

Do we not have the most stunning First Lady @FLOTUS ever? She's breathtaking. #TrumpinSaudi #MelaniaTrump #MiddleEast #PeaceThroughStrength pic.twitter.com/pMSv9yMpZb

Incidentally, the First Lady also stirred debate by refraining from wearing a veil, which is an expected thing for women to do in Saudi Arabia. Remarkably, Donald Trump himself previously slammed former First Lady Michelle Obama for not wearing a veil during her visit to Saudi Arabia in 2015 together with Barack Obama.

Many people are saying it was wonderful that Mrs. Obama refused to wear a scarf in Saudi Arabia, but they were insulted.We have enuf enemies