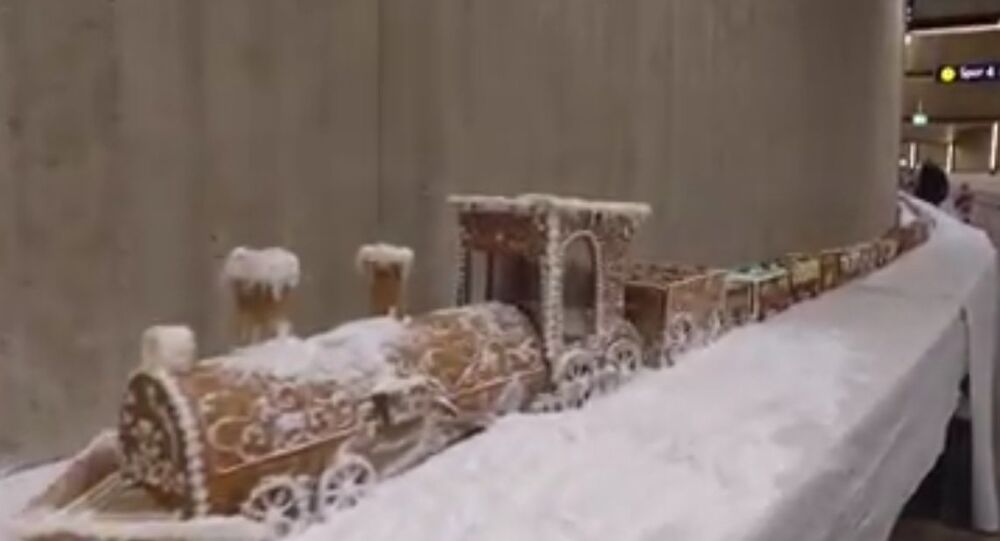 Norway seems to have set another crazy record. Those eccentric Norwegians topped their own five-year-old record by baking the world's longest gingerbread train. The gargantuan pastry ended up so long that it needed two tracks to fit.

© Photo : Youtube / letgo Norway
'I Like Fridge': Russian Sub Unexpectedly Emerges in Norwegian Ad (VIDEO)
The over-370-meter-long gingerbread train was a quirky way to celebrate the opening of Holmstrand Station, which now is the world record holder in this peculiar category. The record could have been pushed even longer, but some 30 cars crumbled during the assembly process. The previous world record holder was Oslo Central Station, which exhibited a mouthwatering 206-meter-long locomotive made entirely of gingerbread, Norwegian national broadcaster NRK reported.

The record effort required nearly 700 kilograms of gingerbread dough. Over a thousand schoolchildren and local entrepreneurs were reported to to have contributed by forming and baking an endless string of carriages, each about 25 centimeters long. To qualify for the record, the gaps between the cars had to be shortened by applying extra powdered sugar.

Norwegian Prime Minister Erna Solberg, who was on the spot to cut the ribbon and officially open the new train station, used the opportunity to take pictures of the record —holding breaking train as well.

Norwegian Prime Minister Erna Solberg, who was on the spot to cut the ribbon and officially open the new train station, used the opportunity to take pictures of the record breaking train as well.

Holmestrand Mayor Alf Johan Svele said his fellow townsmen should be proud of their sweet achievement.

​"It feels really good. As mayor, I am really proud because this confirms what I already knew from personal experience: Holmestrand's people are active and always show up," Svele told NRK.

© Flickr / alexanderTIEDEMANN
A View to Die for: Thoughtless Selfie-Tourists Distress Norwegian Rescuers
Unfortunately for the town dwellers, they did not get to taste the fruits of their labor. The world's longest gingerbread train was rather short-lived and was dismantled after only two days on display. Since the bread was not approved for human consumption, it was likely used to sweeten the life of farm animals, as all of 370 meters of the carriages were previously said to end up as pig feed.

In the Nordic countries, brittle cookies made of gingerbread are a popular treat associated with the extended Christmas period. The cookies are flavored with powdered ginger and a variety of other spices, most commonly cinnamon, molasses and nutmeg and are decorated with icing.