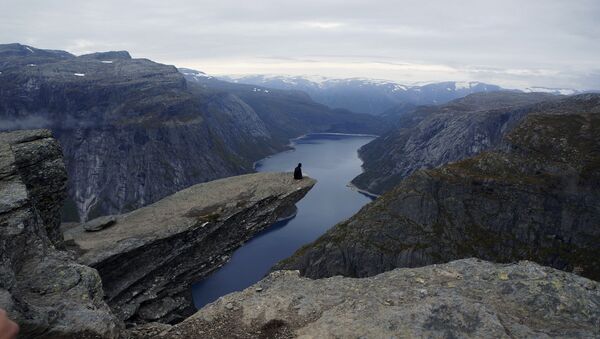 © Flickr / alexanderTIEDEMANN
Subscribe
The influx of hikers to the picturesque cliff of Trolltunga (‘troll's tongue') in the Norwegian mountains has proven a mixed blessing. Despite the fact that the annual flow of tourists soared from 800 to 80,000, Norwegians are far from delighted. Visitors often risk their lives posing for dramatic photos.

When Narcissism Kills: ‘Selfie Deaths’ on the Rise in India
Tourists from around the world flock to Trolltunga to enjoy the scenic view from the mountain top, many of them posing for dramatic photos standing close to the edge or dangling their feet over the drop. Between 2010 and 2016, the flow of tourists to the breath-taking rock formation of Trolltunga rose by a formidable 100 times and is expected to pass the 100,000 mark, Norwegian national broadcaster NRK reported. The hashtag #trolltunga has been used some 50,000 times on Instagram alone.

One of the most spectacular scenic cliffs in Norway, Trolltunga is situated about 1,100 meters above sea level, overhanging some 700 meters above lake Ringedalsvatnet. However, the magnificent views are preceded by a long and hard hike of 20-odd kilometers with a 900-meter ascent, taking some 10-12 hours. The hike is available from mid-June to mid-September, depending on the snow conditions. There is no mobile phone coverage along the route, which does not allow tourists to post selfies immediately after the ascent and, more importantly, complicates salvage operations.

"So far, it has been a great challenge to deal with the tourist inflow, both in terms of hikers' safety and the preservation of the landscape, advisor Rolf Bøen at Odda municipality, told NRK, citing tourists' poor preparation and noncompliance.

Forewarned, Forearmed: Norway, Sweden Join Emergency Networks
Despite all warnings, every year dozens of search and rescue operations are carried out to rescue reckless hikers in serious trouble. In September 2016, a group of British hikers, who dangled from the cliff in order to make a perfect selfie, was condemned for their stunt, which was called "idiotic" by Jostein Soldal, who runs the Trolltunga Active tour company.

In 2015, an Australian hiker lost her balance and fell from a rock on her way back from the top. Thomas Ruud, the owner of Trolltunga Adventures, commented that an accident was waiting to happen.

The public's access to the Norwegian nature is ensured by the freedom to roam, which is also known as "every man's right."

#ThrowBackThursday to when we almost broke our legs hiking #Trolltunga in #Norway #worthit https://t.co/7baTue7IyV pic.twitter.com/jpx7lFHtf0

​"Without it, mountain life in Norway would have been completely different. But when it gets to places like Trolltunga, it is not an open mountain area anymore, but something resembling a large amusement park," Bjørn Arild Fjeldsbø of Red Cross Norway told NRK, calling for some kind of regulations.

Local politician Terje Kollbotn suggested charging all tourists an entrance fee, which with 100,000 visitors will provide the local budget with an extra 50 million NOK ($8mln) for equipping the vicinity with all necessary amenities such as a base camp with 100 beds, Norwegian newspaper Bergens Tidende reported.

So far, the municipality has provided secured trails and built an emergency shelter in case of abrupt weather changes.

000000
Popular comments
Well if the so called rescue services just left people alone to sort out their own responsibility the message would soon get down the line, "hike up here at your own peril, no one is gonna come and save you". Then any self absorbed "I can't live without my smart phone" snowflakes would either get blown away or melt in the realization that they need to be responsible and stop expecting others to fall in line with their own set of self centered beliefs, lol
CJ
25 November 2016, 17:37 GMT1
000000
potential to be a 'temporary tourist'.
michael
28 November 2016, 12:30 GMT
000000
Newsfeed
0
New firstOld first
loader
LIVE
Заголовок открываемого материала
Access to the chat has been blocked for violating the rules . You will be able to participate again through:∞. If you do not agree with the blocking, please use the feedback form
The discussion is closed. You can participate in the discussion within 24 hours after the publication of the article.
To participate in the discussion
log in or register
loader
Chats
Заголовок открываемого материала
Worldwide
InternationalEnglishEnglishMundoEspañolSpanish
Europe
DeutschlandDeutschGermanFranceFrançaisFrenchΕλλάδαΕλληνικάGreekItaliaItalianoItalianČeská republikaČeštinaCzechPolskaPolskiPolishСрбиjаСрпскиSerbianLatvijaLatviešuLatvianLietuvaLietuviųLithuanianMoldovaMoldoveneascăMoldavianБеларусьБеларускiBelarusian
Transcaucasia
ԱրմենիաՀայերենArmenianАҧсныАҧсышәалаAbkhazХуссар ИрыстонИронауОssetianსაქართველოქართულიGeorgianAzərbaycanАzərbaycancaAzerbaijani
Middle East
Sputnik عربيArabicArabicTürkiyeTürkçeTurkishSputnik ایرانPersianPersianSputnik افغانستانDariDari
Central Asia
ҚазақстанҚазақ тіліKazakhКыргызстанКыргызчаKyrgyzOʻzbekistonЎзбекчаUzbekТоҷикистонТоҷикӣTajik
East & Southeast Asia
Việt NamTiếng ViệtVietnamese日本日本語Japanese中国中文Chinese
South America
BrasilPortuguêsPortuguese
NewsfeedBreaking
19:50 GMTIsraeli Deputy Defence Minister Dodges Question About Tel Aviv's Complicity in Natanz Blast
18:38 GMTCorridors of POWDER: Brits React to News of Drug Sniffer Dogs in Parliament
18:26 GMTMercedes' Hamilton Takes Win in First Saudi Arabian GP After Chaotic Battle With Verstappen
18:02 GMTTucker Carlson Was Reportedly Friends With Hunter Biden, Intervened in Media Report on His Behalf
17:44 GMTPutin: People Vaccinated With Sputnik V Should Not Be Deprived of Right to Travel
17:02 GMTPolish Authorities Officially Confirm Detention of Russian Ship Ruslana
16:36 GMTBelgian Police Use Tear Gas After Clashes With COVID-19 Protesters Broke Out in Brussels - VIDEO
16:28 GMTTrump's Media Company Says Raised $1Bln From Investors
16:19 GMTOrigin of Water on Earth: Mystery Solved?
16:16 GMTIdentity of Baroness Mone's Accuser Reportedly Revealed as She Denies Racist Claims Against Her
15:47 GMTSniffer Dogs Could Be Deployed in UK Parliament as Cocaine Found Near PM’s Office, Report Says
15:35 GMTDemocrats Were Wrong After All: IRS Data Reportedly Shows Trump Tax Cut Benefited Middle Class Most
15:02 GMTOvechkin Repeats NHL Record of Scoring 20 Goals in 17 Consecutive Seasons
14:36 GMTUK Justice Sec Raab 'Not Convinced' of 'Strait-Jacket' Vaccine Mandates
14:24 GMTBBC Reportedly Threatened With Contempt of Court Over Refusal to Disclose Info About Diana’s Letter
14:23 GMTBelarus' Defense Ministry Hands Note to Ukraine's Diplomat Over Air Border Crossings
14:05 GMTEU's Borrell Says Brussels Working to Forestall Conflict Between Russia and Ukraine
14:03 GMTDefiant Tory MPs Slam Govt's Plans to Repel Migrant Boats Crossing Channel, Propose Alternative
13:34 GMTVery Special Fashion: 'Let's Go Brandon' Store Opens in Massachusetts
13:24 GMTLavrov, Blinken Reportedly Had 'Testy Exchange Over Ukraine' at OSCE Gathering