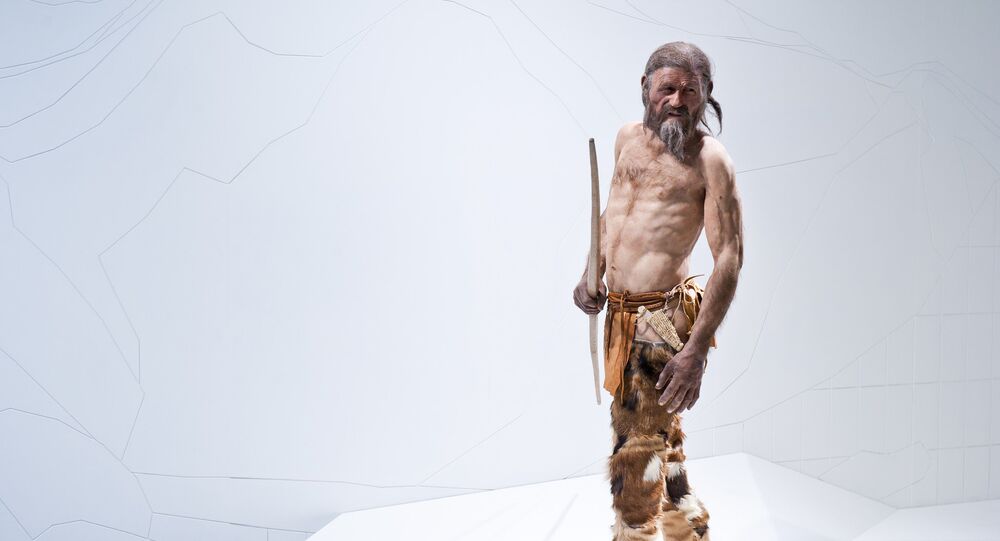 A study of the remains of a Tyrolean iceman who lived during the Copper Age has revealed the materials he chose to construct his outfit.

© Flickr / Erich Ferdinand
New DNA Sequencing Reveals Prehistoric Man's Dramatic Journey Round Europe
Tyroleans who lived during the Copper Age made considered choices about their clothing, which was made from local domestic and wild animals, according to a study of Otzi the Iceman.

Otzi's remains were discovered in a glacier in the Ötzal Italian Alps in 1991, and since then scientists have spent decades researching his ancestry, diet, tools, lifestyle, health and attire.

While biomolecular research on Otzi's clothing has been hampered by the material's relatively high decomposition, in the latest study scientists used new techniques of mitochondrial DNA capture and gene sequencing to analyze the materials.

Institute for Mummies and the Iceman
Ötzi the Iceman’s clothing
They revealed that Otzi's coat was made of goat and sheepskin, his loincloth was sheepskin and the leggings were made from goat. His shoelaces were made of cattle while his quiver, the case he used to carry arrows, was made from roe deer. Otzi finished the ensemble with a hat made from brown bear.

In their article, published in the journal Scientific Reports, the scientists said that the genome sequencing shows the animals' genetic relation to those found in the Tyrolean region today.

"The genetic haplotypes of the wild species of both roe deer and brown bear are consistent with present day phylogeography (geographical genetic distribution) in the Alpine region."

Scientists have also studied the remains of Otzi's stomach and found 30 different types of pollen, leading them to deduce that he died in spring or early summer. In July 2001 they X-rayed Otzi's skeleton and discovered a flint arrowhead in his shoulder, which is probably what killed him.