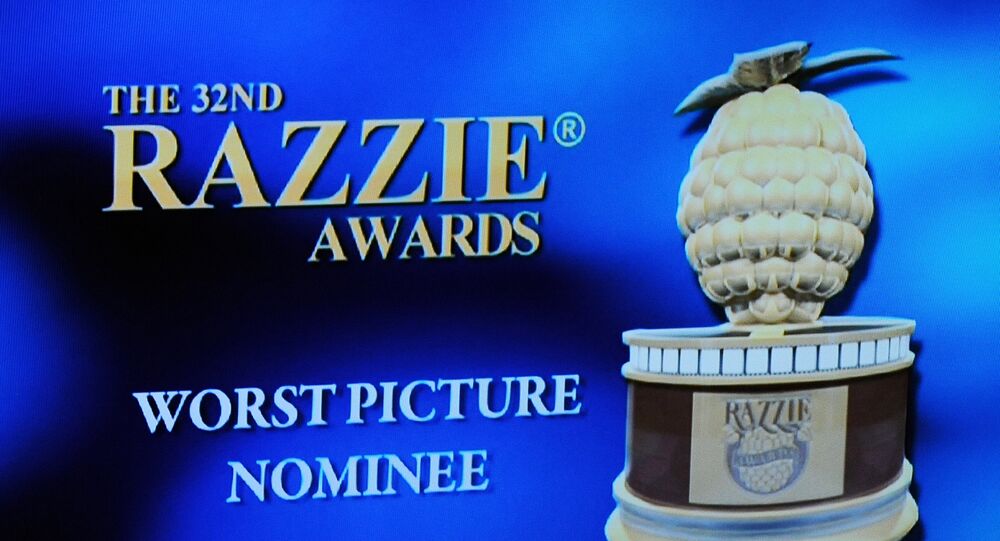 The annual Golden Raspberry Awards, an award ceremony which recognizes the worst film of the year, has announced its shortlist of contenders for 2014: the much-debated movie The Interview is in four of the categories.

© REUTERS / Rick Wilking
N Korea Creates Task Force to Keep Movie ‘The Interview’ Out of the Country
MOSCOW, January 6 (Sputnik) – The controversial and much-debated movie The Interview has been shortlisted in four categories of the of the 2014 Worst Film List.

Presented by the annual Golden Raspberry Awards, called the Razzies for short, the ceremony usually takes place in Los Angeles and precedes the corresponding Academy Awards ceremony by one day. This year it falls on February 21, 2015.

The Interview was shortlisted in four Razzie categories, including Worst Picture and Worst Actor for Seth Rogen and James Franco.

© AP Photo / Damian Dovarganes
One of Major US Satellite TV Providers to Make ‘The Interview’ Movie Available: Reports
The Razzies also listed James Franco in the Worst Screen Combo category alongside either Rogen or actor Randall Park, who played Kim Jong-un in the comedy.

Alongside The Interview, there is also Seth McFarlane's western-comedy A Million Ways to Die in the West, leading the charge with eight potential nominations on the shortlist.

Voting ends on January, 10. Nominations will be unveiled on January 14 — one day before Oscar nominees are announced.

© REUTERS / Kevin Lamarque
North Korea Slams US, Obama for Releasing 'The Interview'
North Korea has repeatedly denounced The Interview, claiming the movie insults "the dignity of the supreme leadership of the DPRK."

Some two weeks before the planned movie premiere, Sony was subjected to a massive cyber-attack, resulting in the theft of internal company information, as well as its employees' personal data. Sony decided to cancel the premiere following threats from the hackers that they would reveal the stolen information.

In mid-December, however, Sony reconsidered the premiere's cancellation, and decided to release the comedy online and to run it in more than 300 independent movie theaters throughout the United States.

The Interview has become Sony's highest-grossing Sony online release, bringing the company $15 million as well as an additional $2.8 million in earnings from the movie theaters in the four days since its release.