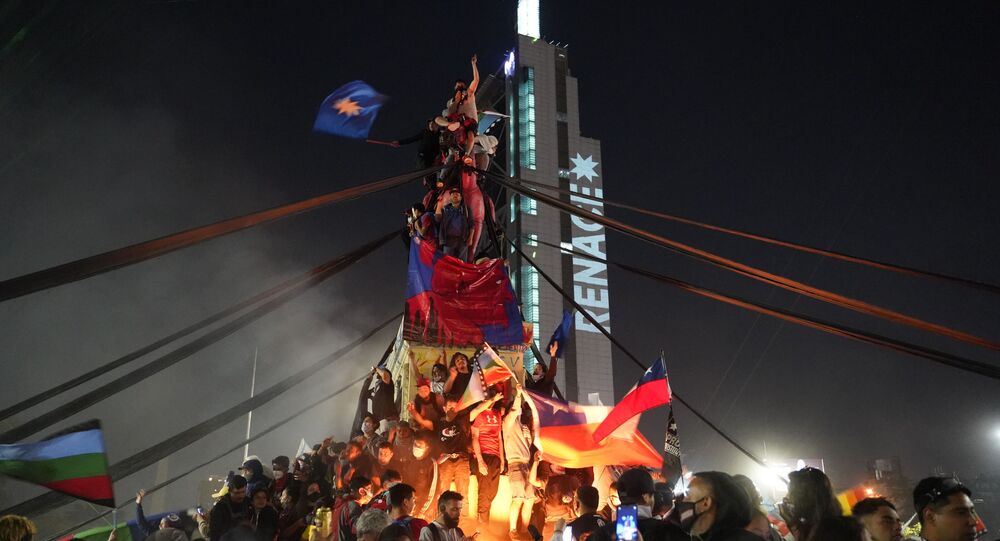 On 25 October 2020 the Chilean people overwhelmingly voted to replace the constitution imposed on the country by the coup government of General Augusto Pinochet, representing a desire to break with the neoliberal policies which have plagued the country for the last forty years, a British-Chilean documentary filmmaker tells Sputnik.

On 4 November 2020, the 50th anniversary of socialist leader Salvador Allende being elected as president of Chile, journalist and documentary filmmaker Pablo Navarrete tells Sputnik that the plebiscite which called for the replacement of the Chilean constitution would not have occurred without mass street protests, from various classes, reflecting deep discontent neoliberalism and the constitution imposed by the coup government of General Augusto Pinochet in 1980.

Sputnik: What changed in the Chilean constitution after General Augusto Pinochet led the overthrow of the elected government of Salvador Allende?

Pablo Navarrete: The US-backed Pinochet dictatorship lasted nearly 17 years between 1973 and 1990. It was responsible for the murder, imprisonment, torture and forced exile of tens of thousands of people. Through state terrorism, Pinochet radically transformed Chilean society and the country became the world’s first laboratory for testing radical ‘neoliberal’ economic policies devised by right wing US economist Milton Friedman, whose pupils in Chile became known as the ‘Chicago Boys’, as they had studied with him at the University of Chicago.

These policies included the wholesale privatisation of economic sectors previously administered by the state, in areas such as health, education, public utilities and sectors of the copper mining industry, which provides the mainstay of Chile’s export earnings. For example, in July 1971 Salvador Allende’s Popular Unity government proposed a law that was unanimously approved in congress to nationalise the copper mining industry. This new law modified the 1925 constitution in force at the time and declared mining to be the state’s responsibility, with the goal of using it for society’s development. However, under Pinochet, the sector was almost entirely privatised with this neoliberal approach to the sector consolidating in the 1980 constitution.

So the 1980 constitution, which was approved in a rigged referendum without an electoral register, was a way for Pinochet to institutionalise a number of authoritarian economic and political arrangements it has unleashed on the country. The dictatorship’s constitution was drafted by Jaime Guzmán, a key Pinochet adviser and far-right ideologue influenced by Franco’s Spain, and enshrined the dominant role for the private sector at the centre of the economy. In order to force this extreme form of neoliberalism onto Chilean society it was essential to get rid of the constitution in place prior to the 1973 coup against the socialist Allende government.

Sputnik: Who have been the main forces behind this push to repeal and replace the Pinochet Era constitution?

Pablo Navarrete: Firstly, the result of the 25 October plebiscite in favour of replacing Pinochet’s constitutions surprised many, including most pollsters. I think even the most optimistic proponents of the Apruebo (approve) option were surprised that as many as 78.3 per cent voted in favour of establishing a new constitution. I think this high figure speaks to the level of discontent with the neoliberal model of society in place since the Pinochet dictatorship. Even though some of the most extreme forms of state repression such as widespread killing and disappearances are no longer state policy, since the uprising began last October, the level of repression against protestors by Piñera’s security forces has been quite shocking. Many have made parallels with the human rights abuses committed under Pinochet.

Now in terms of the forces behind the push for the constitution, those protesting on the streets for more than a year have been instrumental in forcing Chile’s political class to cede to this demand. It’s important to say that this powerful street social movement has a significant component of people from the poorest and most excluded sectors in Chile. They are an important part of La Primera Linea (The Front Line) who you see on TV and in photos receiving the brunt of the police’s beatings, tear gas, water cannons and the like. But there are also a lot of middle class students and professionals taking part. Never before has there been such a strong spontaneous movement that responds to no particular leadership. This uprising is a unique, new thing in Chile and one can’t just say it’s a leftwing movement against a right-wing president.

The street movement also contains a significant level of  rejection of the existing political parties in Chile, even those deemed on the Left. That was something I really felt when I was in Chile this February making a new documentary about Chilean politics and my own family’s history.

This anti-political class sentiment can be seen in the second important result of the plebiscite which was that 79 per cent of voters chose that the new constitution be entirely drafted by a popularly elected body, meaning no active lawmakers can be involved in the process. The alternative option would have seen a constitution drawn up by a body made up by 50 percent of members of Congress.

But of course many leftwing party activists, especially younger ones, are taking part in the street protests.

The roots of the discontent against neoliberalism and Pinochet’s constitution are deep. The negotiated transition to democracy from 1990 was widely criticised by important Left sectors at the time and, since at least 2000, there have been several important single-issue campaigns against aspects of the Chilean model perhaps most notably a number of student uprisings in favour of free education, the biggest of which took place between 2011 and 2013.

Despite the model apologist in the western press and governments, anyone paying attention could see that the discontent was a pressure cooker waiting to explode. The explosion took place in October 2019, nominally over metro charge hikes but in reality this was simply the straw the broke the camel’s back. People had simply had enough.

Chile reached a tipping point and the Piñera government would never have felt forced to cede to the demands to replace Pinochet’s constitution without this powerful street protest movement that developed. It’s also important to say that the direct action tactics of the street movement were instrumental in forcing the political classes concessions.

Sputnik: Why is this occurring now and what’s the reason it has taken so long for this constitutional movement to reach this point?

Pablo Navarrete: Well the call to replace Pinochet’s constitution and to create a constituent assembly to draft a replacement isn’t new in Chile. But the magnitude of the Chilean uprising - referred to as el estallido (the explosion) - finally forced this on the political class who agreed to allow it as an option largely as a survival mechanism and in the hope that through some of the limitations they have set out in the process, substantive change to the system can be neutralised.

For example, Chile’s congress passed various amendments to the existing constitution to enable the new constitutional process. One of them is Article 135 which states that the new constitution cannot override the country’s commitments under existing free trade agreements. This obviously seems like a brazen attempt to lock in neoliberalism and set up a confrontation between those seeking radical demands for real democracy in Chile and those wanting cosmetic changes to the system. Some sectors of the right voted for a new constitution hoping they could influence its final outcome away from a document that really threatens the interests of Chile’s elite. That’s why I think it so important that the street mobilisations continue because without these, those trying to stave off real change will be emboldened.

Sputnik: Explain the role the US and UK have played in helping to create the economic and political situation that the Chilean people find themselves in?

Pablo Navarrete: Well, the instrumental role of the US government in trying to prevent Allende from coming to power, sabotaging his presidency and supporting the forces that eventually overthrew him has been well documented. More recently, new information has come to light on the UK’s anti-democratic role during this period. It is all well known that Margaret Thatcher was a strong ally of Pinochet and that the neoliberal model forced on Chilean society with such brutality under Pinochet from 1973 onwards served as a laboratory for the right in places such as the UK and US. Today the Piñera government alongside other far right governments in the region like Bolsonaro in Brazil and Duque in Colombia are key US and UK allies. The UK government for example continues to sell millions of pounds in arms and crowd-control equipment to the Chile government despite the horrific accounts of human rights abuses being perpetrated by the security forces.

I imagine both the UK and the US have reacted nervously and with fear behind the scenes to the prospect of a change in the status quo in Chile. And I’d be surprised if they weren’t doing everything they can to support those trying to prevent democratic change.

Neoliberalism was born in Chile and will die in Chile” has become a rallying cry for the movement in the streets. I would like to think that the plebiscite result in Chile has dealt a neoliberalism a mortal blow there. 4 November 2020 marks the 50th anniversary of Allende assuming the presidency in Chile and today there is once again hope that Chile can embark on a similar path to progressive change as was witnessed during the Allende years. However, the road to a truly democratic Chile with social justice will be long and hard, and as history shows us, the enemies of progressive change will do their best to prevent a new Chile from becoming a reality.

Protests in Santiago, Chile Ahead of Looming Referendum to Change Constitution - Video

Allende's Last Stand Against US-Supported Fascism in Chile in 1973