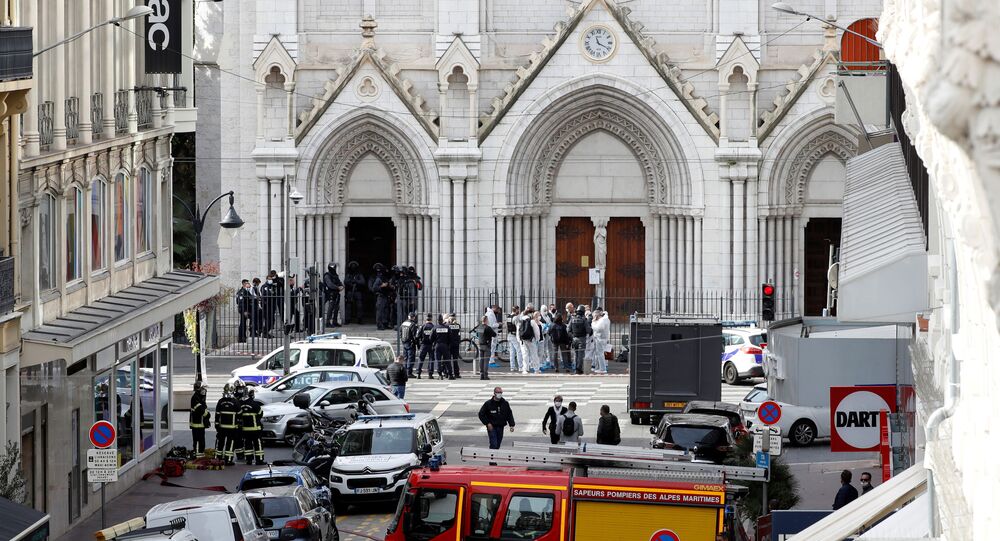 MOSCOW (Sputnik), Ekaterina Chukaeva - France is now in the middle of a terror wave, and with President Emmanuel Macron in charge, the country is unlikely to defeat it, French Member of the European Parliament Virginie Joron told Sputnik, adding that with the EU’s current open-door policies, the situation in the bloc will only get worse.

France and the whole world was shaken on Thursday after a radicalized Tunisian man beheaded two people and fatally stabbed one more at the Notre-Dame de Nice basilica in the French Riviera. Before being grabbed by police, the attacker continuously yelled "Allahu Akbar," prompting the French government to designate the incident as a terrorist attack. The assault in Nice was also followed by a disturbing series of violent acts, including a knife-stabbing attempt in France's southeastern city of Avignon and another one at the French Consulate in Saudi Arabia’s Jeddah.

The gruesome murders in Nice echo another one that shook France two weeks ago. On October 16, French teacher Samuel Paty was beheaded in Paris by a Muslim teen who supposedly found it offensive that the teacher showed media-borne caricatures of Islamic prophet Muhammad during a freedom of speech lesson.

"We are in the midst of a terror wave now and particularly with Macron at the helm, I fear we won’t defeat it anytime soon," Joron, who represents the Identity and Democracy Group at the European Parliament and also a member of France’s right-wing Rassemblement National (National Rally) political party, said.

© CC BY 3.0 / Mister No
Total Protection for Religious Buildings in France Unlikely, Orthodox Archpriest of Nice Says
While terrorism is a global phenomenon, the recent attacks have revealed that extremism is menacing France from within, Joron believes.

"Our focus should be on eradicating the Islamism that has started to take a hold of France. Of course, we have to politicize actions to fight against terrorism, because you have had the laissez-faire school and let anyone on our soil and we first defend our fellow citizens and our civilization, our values of freedom," the politician said, adding that it is the western world with its values and freedoms that is being targeted right now.

She added that many radicals are already in Europe, despite statements of Macron that his government would not allow them to cross the border.

"There [radicals] were in fact allowed in by Macron and his predecessors, and, worse still, they will continue to enter France since the government does not secure our borders nor limit migration," she said.

The Nice attacker, named Brahim Aoussaoui, arrived from Tunisia on the Italian island of Lampedusa in September along with other migrants.

"With the EU’s open-door Migration Pact, things are bound to get only worse in the future," Joron concluded.

Macron has faced some strongly worded criticism across the Muslim world over the past two weeks after he declared his intention to fight radical Islamists and build what he described as "enlightened Islam" in France. His statement came after the gruesome attack on history teacher Samuel Paty in Paris.

Yet, Joron believes that this is not so much a confrontation between Macron and the Muslim world.

"This is a clash between France and the values we uphold in our country - notably the freedom of speech - and the various regimes and Islamists that challenge us. Having said that, the provocations and hate campaigns directed at France, coming from people like [Turkish President Recep Tayyip] Erdogan, of course, add fuel to the fire," she explained.

© REUTERS / ERIC GAILLARD
Terror Might Be Unstoppable But France Has Awoken From 'Virus of Political Correctness' - Ex-Mossad Spy
According to the politician, "a tough diplomatic response" is urgently required. She believes that Turkey should be sanctioned and have its membership candidacy halted after Ankara's reaction. Earlier in the week, Erdogan called on Turkish citizens to boycott French goods amid bilateral tensions over French President Emmanuel Macron's statements against radical Islam.

Joron stressed that French people demand action from the government, not symbols, to protect them.

"That means eradicating Islamism from our soil by all legal means made available. All those people, associations and structures that support this ideology, who disseminate it: they must be put out of harm's way. And yes, that includes expelling foreigners with S Fiches," she said.

France's S card, also known as Fiche S, was introduced back in 1969. When attached to a person, it identifies him or her as a serious threat to national security and allows surveillance. Apart from suspected Islamists, these markers are assigned to criminals from gangs, prison escapees and radical ecologists.

Discussions on the issue have been ongoing amid unrest across France in the wake of the brutal killing of the history teacher. In particular, Marine Le Pen, the leader of the National Rally party, raised the issue of banishing foreigners advocating regional separatism, saying it was a necessary measure.