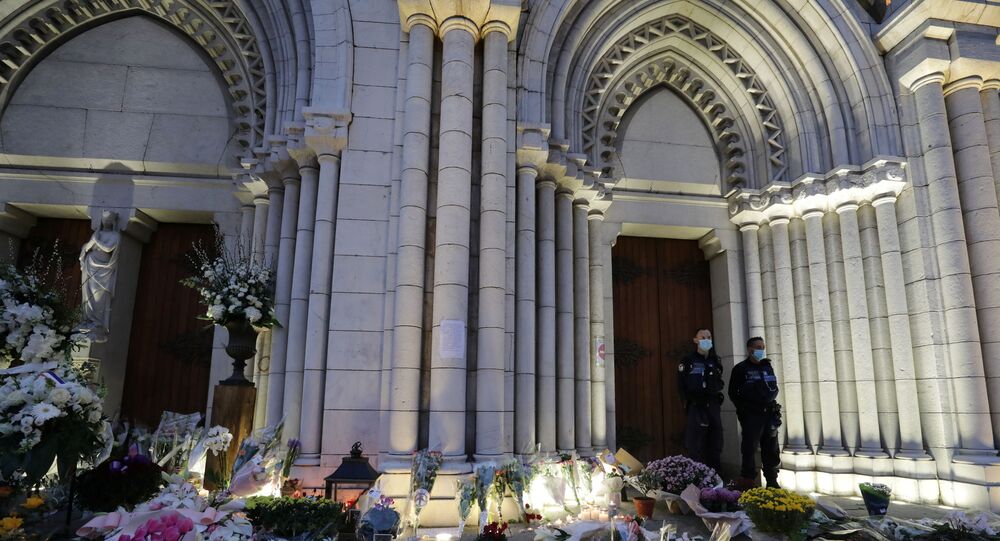 It was reported earlier that the Tunisian authorities have opened a probe into the alleged existence of a terror group that could possibly be connected to the knife attack in Nice, which claimed the lives of three people.

Law enforcement agencies have detained the second person who had contacted the perpetrator of the recent terrorist attack in the French city of Nice, BFMTV reported on Friday, citing sources familiar with the investigation.

The 35-year-old man was reportedly detained on Friday evening and is suspected of contacting the perpetrator just the day before the Nice attack.

Earlier in the day, the first person was detained as part of the investigation.

On Thursday morning, the perpetrator attacked people at the Basilica of Notre-Dame de Nice using a knife. He was able to kill three people, including one by beheading, before he was shot and arrested by police. According to Nice Mayor Christian Estrosi, the suspect "repeated endlessly 'Allahu Akbar' (God is greatest)" as he was being treated for the injury.

The French government has designated it as a terrorist attack. Following the crime, French President Emmanuel Macron called for national unity.

The attack is being investigated by the anti-terrorism department of the prosecutor's office, which confirmed that the attacker, born in Tunisia in 1999, had arrived in the country via the Italian island of Lampedusa.

The French authorities have now stepped up security measures in places of worship, particularly churches, and have mobilised additional troops for the Sentinelle counterterrorist operation. Macron has pledged to counter religiously-motivated violence in the country and defend the secular values of the European Union.