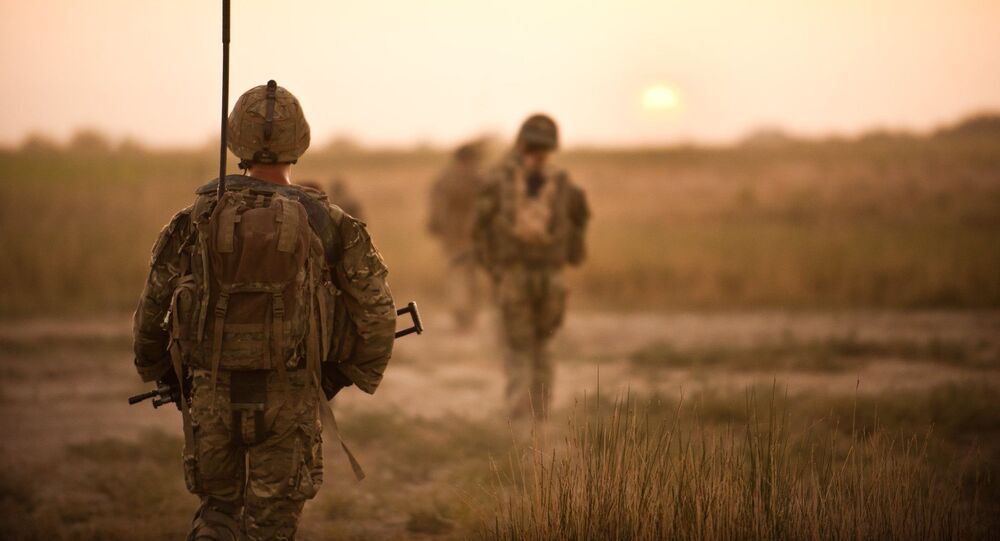 The British House of Commons is debating a law that will make it much more difficult for war crimes to be prosecuted as well as for UK military forces to sue the Ministry of Defence, with the only exception currently being for "sexual misconduct".

Symon Hill is campaigns manager at the Peace Pledge Union (PPU), one of Britain's oldest anti-militarist organisations. He explains that a bill currently being pushed by the UK government would likely reduce the number of lawsuits that soldiers bring against the Ministry of Defence and further entrench a culture of impunity when it comes to war crimes. "We have protection from unjust allegations when human rights are upheld, not when they are denied", Mr Hill argues.

Sputnik: Describe what exactly the Overseas Operations (Service Personnel and Veterans) Bill 2019-21 is and what it proposes.

It has been brought to the UK Parliament by Defence Secretary Ben Wallace and Minister for Veterans Johnny Mercer.

There are two major elements to the bill. Firstly, it will introduce a “presumption against prosecution” for UK armed forces personnel accused of war-related crimes after five years have passed (unless the alleged offence involves sexual misconduct). Secondly, it will impose a six-year limit on armed forces personnel taking legal action against the Ministry of Defence.

Sputnik: Can you give some realistic examples of the consequences of this bill should it become law?

Symon Hill: There is likely to be a reduction in legal cases against the Ministry of Defence brought by current or former armed forces personnel. The bill will make it impossible for them to bring such cases if six years have elapsed since the incident in question, a provision that does not generally apply to people in other jobs or action against other government departments.

But the consequences of passing this bill will go beyond the specific legislation involved. The bill will add to the impression that the armed forces are above the law.

The armed forces are already the only institutions in the UK that are allowed to run their own criminal courts. They also have their own police force and prosecution service. Politicians are very cautious about saying anything critical of the armed forces. In 2015, a serving general was quoted in the media threatening a military coup if the then Labour leader Jeremy Corbyn became Prime Minister. There was no attempt by either civilian or military police to identify this general or to charge him.

This bill will only add to the feeling that the armed forces as institutions are not accountable. It will not help the rank-and-file forces personnel nor anyone of any nationality who has to deal with the British armed forces, whether in the UK or in a war zone.

Sputnik: Who is this bill likely to impact the most if it becomes law?

Symon Hill: Victims of the UK armed forces. That includes people mistreated by UK forces personnel in war zones, who are even less likely to see their abusers prosecuted than they are now. Within the last year, investigative journalists at the Sunday Times, Guardian and BBC have revealed evidence of the killing of civilians by British troops in Iraq and Afghanistan.

However, victims of the forces also include forces personnel who have been mistreated or abused but may not even be aware that legal action is a possibility until after the six-year limit has expired. This is particularly likely given the slow speed at which the Royal Military Police often work. In 2018, the trial collapsed of 16 army instructors accused of mistreating teenage recruits, because the Military Police had waited over two years after receiving a string of official complaints before making any arrests.

Sputnik: Where has the resistance to this bill, in parliament and from society at large, come from?

Symon Hill: The Labour Party, as the main opposition party in Parliament, has criticised aspects of the bill. Sadly, Labour leader Keir Starmer seems to be scared of being seen not to be supportive of the armed forces. He therefore directed Labour MPs to abstain when the House of Commons voted on the bill in September. Thankfully, a group of Labour MPs voted against the bill, as did other opposition parties including the Scottish National Party, the Liberal Democrats and Plaid Cymru.

The bill is facing widespread opposition in society. As you would expect, critics include peace and human rights groups such as the Peace Pledge Union, Veterans for Peace, Forces Watch, Reprieve and Freedom From Torture. Other opponents of the bill come from within the establishment. They include Nicholas Mercer, a former colonel who was the British army's senior legal officer during the invasion of Iraq in 2003. Critics also include Conservative former ministers, such as former Defence Secretary Malcolm Rifkind and former Attorney-General Dominic Grieve. The Royal British Legion is opposed to the six-year limit on legal cases brought by veterans.

Sputnik: Why should the average Brit be concerned about this bill?

Symon Hill: Amidst the Covid crisis and Brexit, this bill might seem a bit obtuse. It matters because it is about all our rights. Democracy and justice do not work if an institution is put above the law – whether in Britain, Russia, the USA or anywhere else.

Sputnik: Is this bill close to becoming law?

Symon Hill: The bill is going through “Committee Stage” in the House of Commons, during which amendments are considered. At present, it seems quite likely that the Labour Party will seek to amend the bill to ensure that accusations of torture are not covered by the “presumption against prosecution” - the bill already states that this presumption should not apply when it comes to allegations of sexual offences. Removing torture from the presumption would be progress, but nowhere near enough to make the bill acceptable.

The bill will then be presented to the Commons for the “Third Reading”. If the (possibly amended) bill is passed by MPs, it will then go to the House of Lords. We are confident that the bill will face many challenges in the Lords, whose members are at times less wedded to party loyalty than their counterparts in the Commons. We will continue to work with MPs and peers who are seeking to resist the bill.

Sputnik: How do you respond to those who argue that it's not fair for soldiers to have to fear potential prosecutions for the rest of their lives and that this law protects them against spurious and fabricated claims?

Symon Hill: Everybody has the right to be presumed innocent unless proven guilty in a fair trial. This applies to everyone without exception, whether a civilian or a member of the armed forces. There is no need to introduce a “presumption against prosecution” for one group of people that does not apply to others.

The militarist lobby have whipped up a fantasy of a witch-hunt against British veterans. It is not uncommon to read certain politicians and newspapers saying that veterans are being “dragged through the courts”. In reality, British veterans almost never get near a court when it comes to allegations of war-related crimes. It is true that some veterans have been left dealing with the stress of long-lasting uncertainty about whether they will be prosecuted. This is due to failures and delays in the military criminal justice system.

British armed forces personnel are almost never prosecuted for war-related crimes. Whipping up this fear helps the government to divert attention from the real problems faced by veterans – including the 13,000 veterans who are homeless in the UK, and the many veterans affected by heavily underfunded mental health and social care services.

We have protection from unjust allegations when human rights are upheld, not when they are denied.