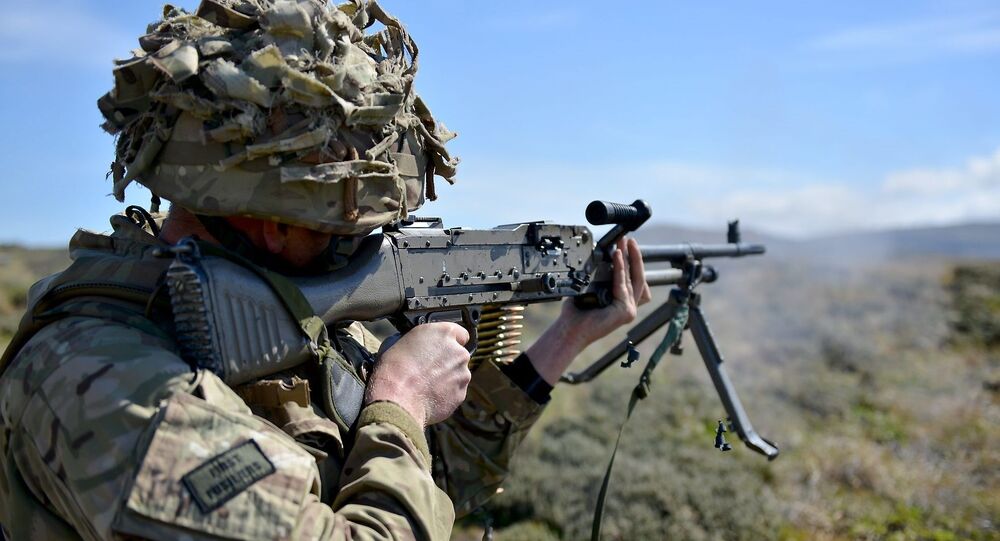 A combination of military and media pressure has resulted in the termination of Iraq war related criminal investigations, reflecting the power of the British military as "the only institution in the UK that is allowed to run their own criminal courts and prosecution service", according to the Peace Pledge Union.

The head of the UK military's prosecuting body, the Service Prosecuting Authority, recently announced that they would be ending over 1,000 criminal investigations into alleged war crimes committed by British forces in Iraq. This decision comes only a few months after the Ministry of Defence was accused of covering up killings of Afghan and Iraqi civilians, by British troops, following a BBC/Sunday Times investigation.

Symon Hill of the Peace Pledge Union (PPU), one of Britain's oldest anti-militarist organisations, explains why the PPU is calling for an end to the military's ability to choose whether or not to prosecute its members and for "military leaders in particular" to be held accountable for war crimes committed abroad.

Sputnik: The Peace Pledge Union has said that it is "worried but not surprised" by the decision of the Service Prosecuting Authority to drop all but one Iraq-war related criminal investigation against British military personnel.

Why exactly are you not surprised and what worries you about this decision?

Symon Hill: UK armed forces personnel are almost never prosecuted for war-related crimes, so it is no surprise that there are unlikely to be prosecutions relating to Iraq. For several years, the militarist lobby and the pro-war press (particulalry the Daily Mail, the Sun and the Daily Express) have been claiming, with no evidence, that there are is a "witch-hunt" under way to launch unfair prosecutions of UK armed forces personnel and veterans.

This allows certain newspaper editors and columnists to appear to be on he side of veterans, while saying little if anything about the homelessness, unemployment and mental ill-health with which many veterans have to grapple. With housing charities estimating that 13,000 veterans are homeless in Britain, far more veterans are having to deal with poverty than deal with prosecutions.

The more high-profile supporters of the "witch-hunt" claim have been careful to say that they want to end only "vexatious" prosecutions of UK forces personnel. They have yet to produce any evidence of vexatious prosecutions. In fact, there are barely any prosecutions at all. However, militarists on social media frequently make clear that they are against *any* prosecution of UK troops for war-related crimes.

In 2013, a Marine Sergeant called Alexander Blackman was convicted of murder after killing a wounded and unarmed prisoner in Afghanistan. The sentence was reduced to manslaughter after Blackman's lawyers pointed out that he had PTSD. This in itself may not be an unreasonable argument. However, Blackman's vocal supporters in the media (and on social media) made barely any reference to PTSD, arguing instead that he had been unfairly punished for "doing his job" and at times suggesting that there was nothing wrong with killing a wounded prisoner (this was stated frequently on social media). Furthermore, Blackman's commanders were never held to account for having sent him into battle when he had PTSD.

Another example, concerns the collapse of a trial in 2018 into 16 army instructors accused of abusing teenage recruits. The trial collapsed partly because the Royal Military Police had not acted on initial reports of abuse because of pressure from "more urgent" enquiries. It is very disturbing to think that they do not regard the alleged abuse of 16-year-olds as an urgent priority.

As pacifists, the Peace Pledge Union does not support war in any form, whether the actions involved are technically legal or not. However, we are worried that the failure of almost any allegations of war-related crimes to come to court is due to the power and influence of the armed forces, who are rarely held to account. On the rare occasions when armed forces personnel are prosecuted, it is nearly always low-ranking personnel who face the courts rather than those who have the most responsibility for making decisions and giving orders.

Sputnik: The Peace Pledge Union argues that this policy is the product of the "witch-hunt" myth. What exactly do you mean by that?

Symon Hill: We were referring to Boris Johnson's policy of watering down human rights legislation in relation to UK armed forces. Johnson made this pledge during his campaign for the Conservative Party leadership last year, making comments based on the witch-hunt myth.

Sputnik: Is it possible that the Crown Prosecution Service and the Metropolitan Police Service may initiate their own investigations into alleged war crimes committed by UK forces in Iraq?

Symon Hill: I am not a lawyer, and it would take a lawyer to give a full answer to this question. However, my understanding is that the Crown Prosecution Service generally act on information passed to them by the police or other agencies, rather than initiating investigations. I understand that police services generally investigate only within their own geographical area of responsibility, so the Metropolitan Police Service is responsible only for crimes alleged to have taken place in London.

Sputnik: How do we know that there simply isn't enough evidence to keep these investigations open?

Symon Hill: Of course prosecutors will sometimes drop cases due to insufficient evidence. This is true of civilian prosecutors as well as military prosecutors. However, given the hundreds of allegations made about war-related crimes in Iraq, several of which have been covered in the media, many people will find it difficult to believe that there is insufficient evidence for any prosecutions at all. As recently as November 2019, the Sunday Times and Panorama reported evidence of the killing and abuse of civilians by UK armed forces personnel in Iraq and Afghanistan. This was linked with allegations of a cover-up by people within the Ministry of Defence.

Sputnik: What exactly are you calling for now?

Symon Hill: The Peace Pledge Union opposes all war and armed force and supports active nonviolence. There are many people who do not share all these objectives but share our concern about the invasion of Iraq and the lack of accountability of UK armed forces.

We are calling for the armed forces to lose their ability to conduct their own criminal trials and maintain their own prosecution service, and for all armed forces personnel to be subject to civilian laws, with the same rights and responsibilities as the rest of us. We are calling for military leaders in particular to be held to account for their decisions, their actions and the orders that they give.