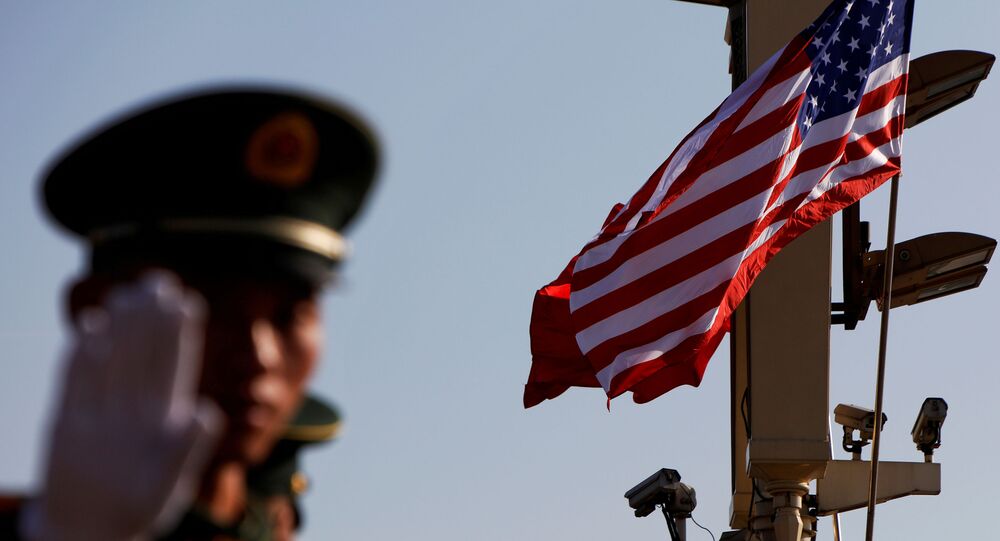 New Cold War on the Horizon? Why China Has Nothing to Fear From Washington

US-China tensions are nowhere near a decrement, as Washington has yet again poked the Dragon by clamping down on the popular Chinese app TikTok over national security concerns. American observers have discussed the string of US anti-Beijing measures, the risks these steps are fraught with, and whether the countries will return to working relations.

The latest ban has come on the heels of a series of anti-China measures, including sanctions against senior officials of the People's Republic and an abrupt closure of China's Consulate in Houston.

The Economist notes that although China and America "are not about to take up arms", the points of friction and misunderstanding are accumulating, threatening to end in an outcome detrimental to both sides: "As a presidential election draws near, the potential for dangerous miscalculation is growing", the media outlet warns.

What's Behind US Crackdown Against China

The current administration has been exerting pressure on Beijing since day one of Donald Trump's presidency. However, previously, US-Chinese frictions were mostly about trade deficit, apparent currency manipulations, and the Chinese telecom sector. Following the COVID-19 outbreak, US-Chinese ties have hit a new low. Both Democrats and Republicans are calling for tightening the screws on the People's Republic.

One could ask whether it was really the coronavirus pandemic, blamed by the White House on Beijing, that became the watershed in Sino-American relations.

Not really, observers say. What matters is the November election.

"There are certainly major issues like China's currency manipulation to increase trade and also territorial claims in the South China Sea, but the real reason is that it is an election year and it is good politics for a candidate to appear to be strong against foreign competitors and 'enemies'", says Philip Giraldi, a former CIA counter-terrorism specialist and military intelligence officer. "This is also what occurred against Russia in 2016. Both Trump's Republicans and the Democrats are doing the same thing to be 'tough' and China is the convenient target".

The president's effort to scapegoat China is part of his strategy to cope with mounting pressure from his opposition, according to Dr Paul Craig Roberts, an American economist and former assistant secretary of the Treasury for economic policy under President Ronald Reagan.

"Trump has been prevented by the US establishment for the entirety of his term from addressing the issues on which he campaigned", Dr Roberts elaborates. "Trump has connected China via rhetoric with US job loss and is playing up conflict with China as evidence that he is trying to do something about bringing jobs home. Coronavirus, 5G, anything that can be attributed to China is helpful in presenting Trump as fighting for America".

Besides this, there is an internal political competition among Trump's associates, with China hawks playing the first fiddle, deems Thomas W. Pauken II, a Beijing-based Asia-Pacific affairs commentator and author of US vs China: From Trade War to Reciprocal Deal.

One of these hawks is Secretary of State Mike Pompeo, who is fanning the flames of US-China tensions in an apparent bid to score political points, according to Pauken. Over the past few months, the US secretary of state has been urging Europe and other nations to form an alliance against the People's Republic. While delivering his speech on 23 July at the Richard Nixon Presidential Library and Museum in Yorba Linda, California, Pompeo declared the failure of 50 years of engagement with China.

Pauken draws parallels between the Trump administration's growing anti-Beijing rhetoric and plummeting poll numbers, suggesting that the anti-China strategy is "just not working to win over the voters’ hearts".

Neither of the observers believes that ramping up tensions with Beijing will bear any positive fruit. At the same time, neither of them expects a potential direct confrontation between the powers.

However, the ex-CIA field officer envisions that the US "will certainly push hard on China to limit its claims to the Spratley Islands in the South China Sea".

"If it comes to a trade war the US will lose because China produces many consumer items that are currently sold in America but no longer produced here", admits Philip Giraldi. "When the shelves in American stores become empty, the public will demand that the government do something about it, which will mean going back to normal relations".

"China has nothing to fear from Washington", agrees Dr Roberts. "So much of American industry is located in China that were China to nationalise it, Wall Street would collapse".

Besides this, if pushed over the edge the People's Republic can still go nuclear on US bonds and currency, the economist presumes.

"With the US dollar currently falling below its support levels, China could dump the $1 trillion in US government bonds it holds on the bond market", Dr Roberts notes. "This would force the Federal Reserve to protect bond prices (and low interest rates) by printing $1 trillion more dollars with which to purchase the bonds. China could then dump the $1 trillion in the currency market, and the US dollar would take a major hit that could signal the end of its reserve currency role".

© REUTERS / Carlos Barria
A man talks on the phone inside the Shanghai Stock Exchange building at the Pudong financial district in Shanghai November 17, 2014

US Allies Unlikely to Team Up Against China

As for a much-discussed "united front" against Beijing, many US allies are ignoring demands to block Chinese companies and investments, the CIA veteran points out.

"The issue is that China is taking over key growth industries like telecommunications that once were dominated by American and European companies", Giraldi explains. "Trump would like to reverse that but China has a big lead both in the technologies themselves and the marketing".

Recently, the UK government succumbed to pressure from the US administration and ordered British mobile providers to remove Huawei's equipment from their networks by 2027 at an expected cost of £2 billion. However, when it comes to the EU, the final word rests with Germany: if Berlin bars the Chinese telecom firm, then other European states will follow its suit, The Economist foresees. As of yet, the German government has stopped short of a Huawei ban in the upcoming 5G rollout.

For his part, Dr Roberts suggests that China should not worry about the EU stance in the long term, as the economy of Washington's European allies is heading towards a protracted decline, just like that of the US.

"China’s Silk road is not focused on the West", the economist underscores. "China is focused on Asia and Africa. Asia, not the West, is where the future lies. If China and Russia form a strategic alliance, that alliance will dominate the world. The time of the West has passed".

© AP Photo / Andy Wong
Workers install wires on a 'Golden Bridge of Silk Road' structure on a platform outside the National Convention Center, the venue which will hold the Belt and Road Forum for International Cooperation, in Beijing, April 18, 2017

Things May Get Better After Elections

The US-China relationship is likely to come back on track after the November elections, predicts Thomas Pauken.

"China understands that during US elections season, it’s routine for American politicians to play the anti-China card", the author says. "If Trump wins his re-election bid, he will focus on the US economic rebound. He needs China to play a more cooperative role for boosting the US economy. He’s likely to play nice with Beijing to score a much better US-China trade agreement that will be a win-win for both sides".

At the same time, he expects that Trump will reshuffle his cabinet, "fire anti-China neocons in his administration and start fast-paced negotiations with Beijing over a US-China trade deal". Thus, Pauken expresses doubts that "Pompeo will serve as US secretary of state for Trump’s second-term".

However, if Biden assumes the Oval Office, the Asia-Pacific commentator is not sure that "peace will prevail", since "many neoconservative thought leaders have endorsed Biden’s campaign" and are ready to jump on his bandwagon.

"It will get very bad this year before it improves once the election is over and things settle down in Washington", admits Philip Giraldi. "Neither party would benefit from an open state of hostility that continues much longer and everyone knows that".