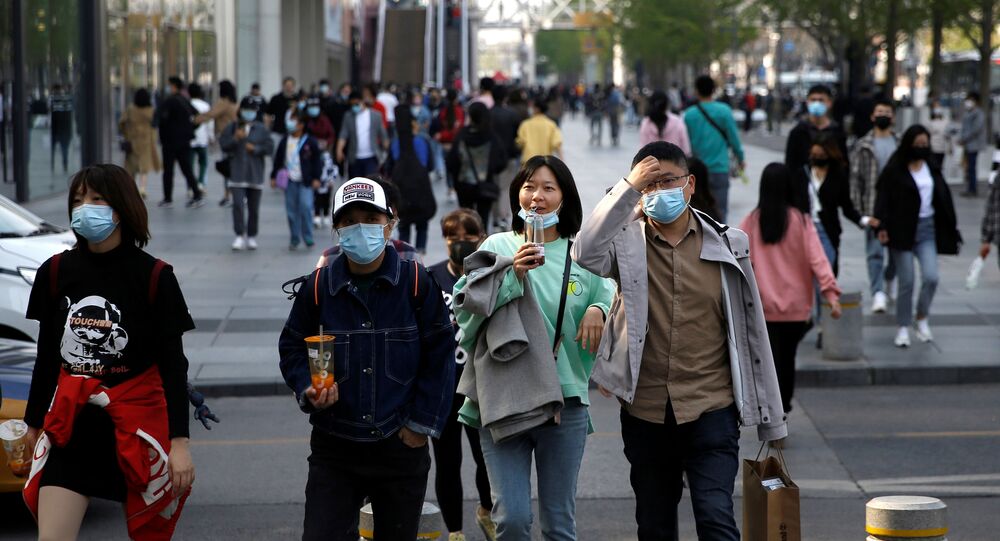 In addition to hitting over 1.4 million cases and claiming about 80,000 lives worldwide, the COVID-19 disease has exacerbated tensions between the US and China, which had seemingly calmed down after the two nations signed their phase one trade deal in mid-January 2020.

As China reported zero new coronavirus-related deaths for the preceding 24 hours on 7 April for the first time since the outbreak, the White House has signalled its suspicions that the People's Republic is concealing its actual statistics.

"Every nation, be they a democracy or not, has to share this information in a transparent, open, efficient way," US Secretary of State Mike Pompeo said on Tuesday in an apparent reference to the People's Republic.

The Trump administration has repeatedly blasted China for the country's handling of the coronavirus pandemic, claiming that Beijing was withholding information needed to curb the spread of COVID-19. For its part, China refuted the allegations, insisting that it had been transparent about the pandemic from the start.

China is hardly hiding anything, argues Thomas Weir Pauken II, a Beijing-based Asia-Pacific Affairs commentator and author of US vs. China: From Trade War to Reciprocal Deal, who has been keeping an eye on the pandemic since the outbreak.

"New confirmed coronavirus cases are getting reported in China daily", he says. "Beijing has a public announcement system in play to issue text messages to all Chinese smartphones to disclose the daily reporting of numbers. By reviewing recent texts, I can see that 54 cases were reported in China on Monday, 6 April."

According to him, it's too early yet to say that China has completely defeated COVID-19 until people with coronavirus have been either cured or listed as dying from it. As of 8 April, the People's Republic had two new coronavirus-related deaths.

"You need a two-week time frame after that when no new cases are getting reported," he remarks. "That’s because the virus could still impact the country under a second wave."

Likewise, Pauken, a US citizen who has been living in China for the last decade, does not buy into allegations that China did not inform the international community about the virus in a timely manner.

He stresses that Beijing raised the alarm over the new highly contagious virus in the end of December, insisting that Secretary Pompeo might have been informed about the situation at that time.

On 31 December 2019, Chinese health officials reported to the World Health Organization (WHO) that they had faced the then-unknown virus. According to the entity's official press-release, the three levels of the WHO, including the China country office, the regional office for the Western Pacific and WHO headquarters have been jointly working to respond to the outbreak since 2 January 2020.

On 11 January the genome sequence of COVID-19 deciphered by the Chinese scientists was published on an open access site, making it available for the global biomedical community.

To everyone in #Wuhan, in China & beyond who have worked so hard over the last few weeks in difficult circumstances & in particular over last 12-24 hours to facilitate this - on behalf of everyone - thank you. https://t.co/LIlBXDrLql

​For comparison's sake, it took several months for Chinese health workers to identify SARS after its outbreak November 2002. The epidemic was brought under control in late June 2003 and nixed by mid-August 2003.

Is the WHO 'Very China-Centric'?

The WHO has been recently subjected to criticism from the White House as well. On Tuesday, Donald Trump accused the international organisation of downplaying coronavirus-related risks, referring to the WHO's criticism of the US travel ban imposed on China in the aftermath of the outbreak. In addition, the US president blamed the entity for an alleged pro-China bias and threatened to suspend its funding.

"The WHO really blew it", Trump tweeted. "For some reason, funded largely by the United States, yet very China-centric. We will be giving that a good look".

​According to Pauken, the argument that the WHO is scheming to cover up for China does not appear convincing.

"The WHO receives a large amount of funding from non-Chinese donors, while Washington delivers much aid to the WHO", he says. "Why would the WHO alienate its donor base just to please Beijing? How could they benefit in the long-term by engaging in so-called criminal actions?"

The Beijing-based commentator argues that China "has made every effort to explain its expertise [in tackling the disease] to the rest of the world" and now is stretching a helping hand to the nations of Asia, Europe, Latin American and Africa that are fighting the highly contagious virus.

Last week, New York Governor Andrew Cuomo announced that China had donated 1,000 ventilators to the state, which remains one of the most severely hit by the pandemic in the US.

"China wishes to gain greater respect", the Beijing-based political commentator opines. "The country does not like being treated like an outcast in global governance mechanisms. The West views Beijing with grave suspicions and that can cause more harm than good."

According to Pauken, "amid the pandemic, China can play a crucial role to conduct extensive lab research on vaccines and medicines, export huge loads of medical supplies, while informing other sovereign nations how China has mostly overcome the coronavirus by enforcing stringent lockdowns, quarantines and to explain their mistakes and good deeds."

"The 'Blame China' approach will be disastrous for the West," the author believes. "Only China has the capacity to export sufficient coronavirus medical supplies to other countries, since Chinese factories are up and running at full tilt. Many other countries remain under lockdowns, which has severely disrupted local supply chains. Let China help, it’s not worth dying for the 'Blame China' political movement".